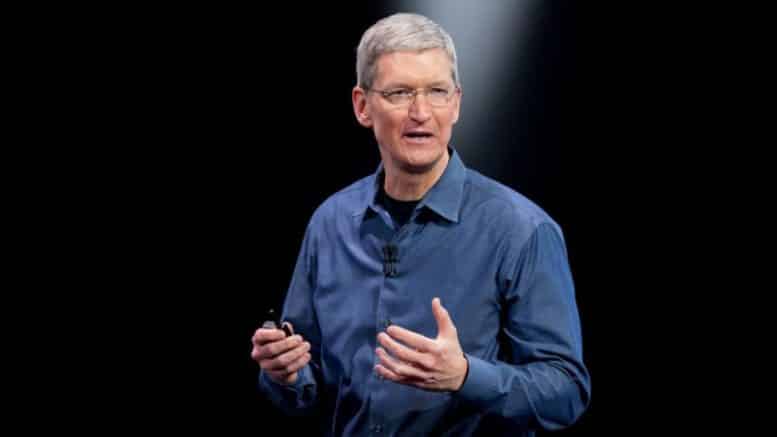 Please Share This Story!
PDF 📄
Technocrat Tim Cook heads the giant Apple organization and he is calling for a) the elimination of money in society and b) Universal Basic Income, both of which are pillars of modern Technocracy. Don’t assume for a minute that Cook doesn’t understand what he is doing! ⁃ TN Editor

Apple CEO Tim Cook has one big hope for the future – that he lives to see the end of money.

“…I’m hoping that I’m still going to be alive to see the elimination of money.”

Speaking at a meeting for Apple shareholders in Cupertino, California earlier this month, Cook made it clear that he is firmly on the side of the war-on-cash establishment.

“Because why would you have this stuff! Why go through all the expense of printing this stuff and then some people steal it, and you’ve got to worry about counterfeits and all these things,” he continued.

As Apple’s CEO talked about the downsides of cash, BI reported that he became more animated, revealing his real passion about the topic…

“And it’s more secure, if you’ve ever had your credit card ripped off, I’m sure a lot of you have, I have, it’s not a good experience.”

Until now, it has tended to be politicians and central bankers leading the call for a cashless society… for your own good.

The enemies of cash claim that only crooks and cranks need large-denomination bills. They want large transactions to be made electronically so government can follow them. Yet these are some of the same European politicians who blew a gasket when they learned that U.S. counterterrorist officials were monitoring money through the Swift global system. Criminals will find a way, large bills or not.

The real reason the war on cash is gearing up now is political: Politicians and central bankers fear that holders of currency could undermine their brave new monetary world of negative interest rates. Japan and Europe are already deep into negative territory, and U.S. Federal Reserve Chair Janet Yellen said last week the U.S. should be prepared for the possibility. Translation: That’s where the Fed is going in the next recession.

Negative rates are a tax on deposits with banks, with the goal of prodding depositors to remove their cash and spend it to increase economic demand. But that goal will be undermined if citizens hoard cash. And hoarding cash is easier if you can take your deposits out in large-denomination bills you can stick in a safe. It’s harder to keep cash if you can only hold small bills.

So, presto, ban cash. This theme has been pushed by the likes of Bank of England chief economist Andrew Haldane and Harvard’s Kenneth Rogoff, who wrote in the Financial Times that eliminating paper currency would be “by far the simplest” way to “get around” the zero interest-rate bound “that has handcuffed central banks since the financial crisis.” If the benighted peasants won’t spend on their own, well, make it that much harder for them to save money even in their own mattresses.

All of which ignores the virtues of cash for law-abiding citizens. Cash allows legitimate transactions to be executed quickly, without either party paying fees to a bank or credit-card processor. Cash also lets millions of low-income people participate in the economy without maintaining a bank account, the costs of which are mounting as post-2008 regulations drop the ax on fee-free retail banking. While there’s always a risk of being mugged on the way to the store, digital transactions are subject to hacking and computer theft.

Cash is also the currency of gray markets—amounting to 20% or more of gross domestic product in some European countries—that governments would love to tax. But the reason gray markets exist is because high taxes and regulatory costs drive otherwise honest businesses off the books. Politicians may want to think twice about cracking down on the cash economy in a way that might destroy businesses and add millions to the jobless rolls. The Italian economy might shut down without cash.

By all means people should be able to go cashless if they like. But it’s hard to avoid the conclusion that the politicians want to bar cash as one more infringement on economic liberty. They may go after the big bills now, but does anyone think they’d stop there? Why wouldn’t they eventually ban all cash transactions much as they banned gold and silver as mediums of exchange?

Beware politicians trying to limit the ways you can conduct private economic business. It never turns out well.

“Because why would you have this stuff! Why go through all the expense of printing this stuff and then some people steal it, and you’ve got to worry about counterfeits and all these things,” he continued. That’s funny leave it in a bank, and the bank will steal it (ask Jamie Dimon how that works)