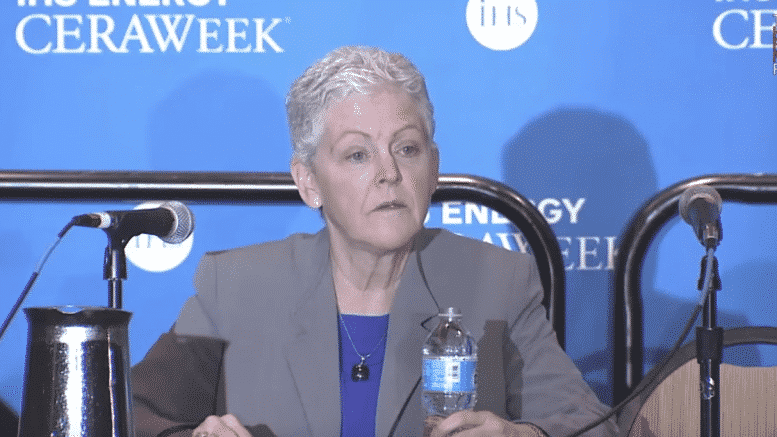 TN Note: Gina McCarthy is a perfect spokesperson for Technocracy. The EPA’s deluge of rules and regulations created by unelected and unaccountable technocrats are not, in fact, tied specifically to global warming. If any given action is a zero suppressor of global warming, then the sum of all their efforts are also zero.

Responding to the contention that if all Canadian oil sands production were stopped today it would only reduce global greenhouse gas emissions by one-tenth of one percent, EPA Administrator Gina McCarthy says it doesn’t matter that it wouldn’t make a difference. McCarthy: “You know what? We had that argument at the Supreme Court and we won decisively… We don’t have to prove that any reduction in and of itself will actually make a precipitous difference”.

REPORTER: “It’s one-tenth of one percent of global emissions. If production in the oil sands stopped today, it wouldn’t make a difference.”

ADMINISTRATOR GINA MCCARTHY: “You know what? You would do that with every single source of greenhouse gases, and we had that argument at the Supreme Court, and we won decisively. Which was that we don’t need to prove that every single source is going to stop greenhouse gas emissions, but if the attitude is that that’s the challenge for us, we will never stop global warming. We will never stop climate change. And, so that has just never been the case for EPA. We don’t have to prove that any reduction will actually make a precipitous difference in and of itself, but we have to admit that there is a lot of efforts need to be done to get at this issue, and it is that combined effort. But, every step, the first step– this is a marathon, and if you don’t take the first step, you ain’t getting nowhere baby.”

They can’t prove global cooling, or Global warming, or man made climate change.

So, what do they do, press on anyway….

How do you say, the emperor is NAKED!

No wonder the EPA never talks about sun cycles.

When is everyone going to understand that we do not control the weather- God controls the weather.

This is about controlling where you go, what you do and what you use…it’s not about CO2 and never was.

“if you don’t take the first step, you ain’t getting nowhere baby”
We’re going nowhere baby anyway because they have the cart before the horse. It’s temps that drive CO2, not the other way ’round

Sounds like Hillary…what difference does I make. Smh. It does no good, it burdens consumers, and it costs jobs. These people are students of Goebbels.

No proof, then we don’t have to believe your BS either, and there is a lot of proof of that.

She failed to say it’s the SUM of all these things that DOES make a difference in global warming. If you don’t believe it you’re ignorant to science!