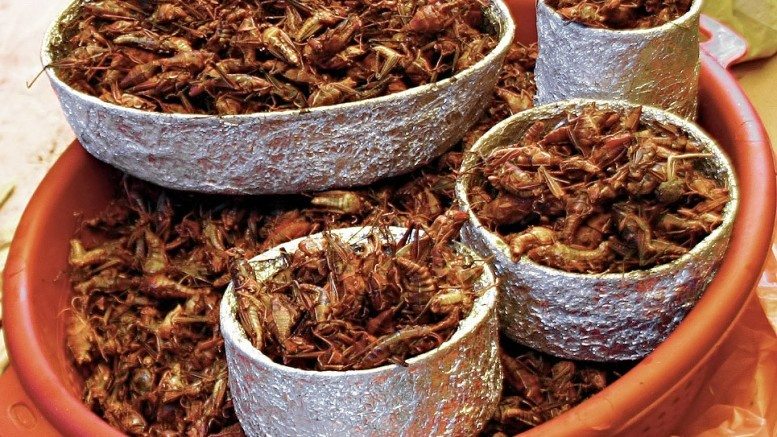 TN Note: The draconian ending to Climate Change is that there is never an ending, but only worse outcomes. Beef is to food as the gas-guzzling SUV is to travel. Technocrats will choose your entire diet for you let them get away with it, using the same logic employed by feed lot operators – efficiency is everything. But don’t worry, they are crunchy when deep-fried.

(CNN) Earlier this week, I wrote a column for CNN Opinion about the climate cost of beef production — arguing we have to cut back on steak and hamburgers to avoid dangerous warming.

In response, Torben Ørvad Jensen, a reader in Denmark, asked why we don’t substitute a fairly unconventional protein source — grasshoppers — for cattle.

Would that help reduce human contributions to global warming?

“How can we get the governments around the world to see, that one of the the answer to both famine and climate change, is breeding new kinds of livestock like grasshoppers?” he asked.

“Insects are not the answer to everything,” he added, “but its one of the great changes that could be fundamental to fighting climate change in the long run.”

I’m not sure about the “convincing world leaders” part, but there is some research to show Jensen may have a point about insects having smaller carbon footprints than other protein sources, especially beef, which has an outsize contribution to global warming.

Insects the protein of the future?

To try to understand why, and the limits of our knowledge about insect protein, I called up Dennis Oonincx, an entomologist at Wageningen University and Research Centre in The Netherlands. Insects are generally far more efficient at turning their food into protein than cattle, he said, which eat low-nutrient grass and burp out methane in the process.

Oonincx told me the results likely would be similar for edible crickets, but that research has not quantified exactly how much crickets contribute to climate change. Crickets likely would have a slightly larger carbon footprint, similar to that of pork or milk.

“If you look at the attributes of these crickets and these mealworms, certain things are very similar,” he told me. “They both need a warm environment, so they need a lot of energy. Both are efficient at using the feed. And they have a very high edible portion.

To understand how mealworms could contribute to climate change, at all you kind of need to know how they’re grown — and what the heck a mealworm farm looks like.

The worst contributors to the destruction of our planet is corporations and the US Military Industrial complex. Not animals which are natural. Basic chemistry class in elementary school before common core and no child left behind policies used to teach it. 4th grade science when one studied thee Carbon Cycle: Grass takes CO2 from the air and turns it into sugar. The cows eat the grass, burn the sugar and turn it back into CO2. Their gut flora takes a little of that carbon and turns it into methane, which is released and it is quickly turned into CO2 also:… Read more »

Why are we not using the waste products of farm animals to produce energy and to recycle into the biosphere?