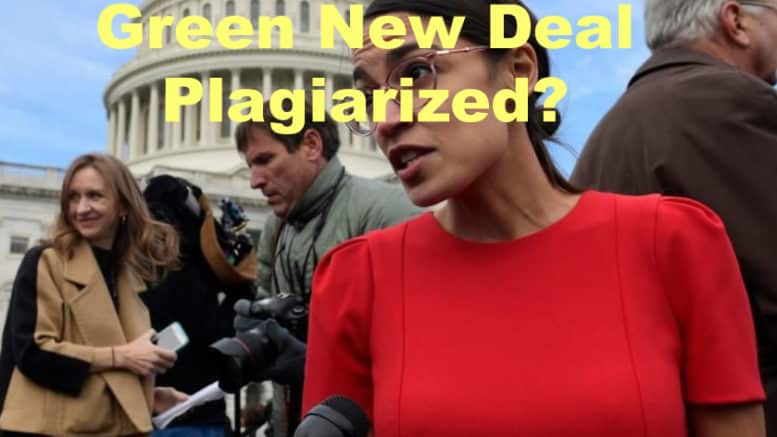 In a stunning revelation from a 2009 UN document titled “Rethinking the Economic Recovery: A Global Green New Deal“, it is discovered that Alexandria Ocasio-Cortez’ (AOC) Green New Deal is not a new movement of the people, but rather a crafty (and plagiarized) creation of a small group of global elite working through the United Nations.

This 144-page report was headed by Edward B. Barbier, a professor of Economics and Finance at the University of Wyoming at the time, but specifically prepared for the United Nations Environment Programme (UNEP)

It was UNEP that sponsored the infamous 1992 Earth Summit in Rio de Janeiro that catalyzed the doctrine of Sustainable Development and produced the Agenda 21 book labeled The Agenda for the 21st Century. UNEP has been at the root of every intellectually bankrupt scheme to flip the world into its resource-based economic system while driving a fatal nail into Capitalism and Free Enterprise. In my books Technocracy Rising and Technocracy: The Hard Road to World Order, I have extensively documented that Sustainable Development is nothing more than warmed-over Technocracy from the 1930s.

Barbier credits a number of people as important contributors to his paper, but two in particuiar ring a loud bell: the Center for American Progress (CAP) and the Peterson Institute for International Economics. (PIIE)

CAP was founded by John Podesta, a prominent member and operative of the Trilateral Commission. Podesta was the principal architect for the U.S. environmental policy for well over 2 decades. He served as Bill Clinton’s Chief of Staff, Special Counselor to Barack Obama and Hillary Clinton’s 2016 Campaign Manager. In July 2002, the UN Secretary-General appointed him to the High-Level Panel On Post-2015 Development Agenda that created the text for the Paris Climate Agreement in 2015.

PIIE was founded by Peter G. Peterson (1926-2018), a principal member of the Trilateral Commission for decades. PIIE’s Board of Directors is a Who’s Who of the Trilateral Commission and includes Lawrence Summers, C. Fred Bergsten, Richard N. Cooper, Stanley Fischer, Robert Zoellick, Alan Greenspan, Carla A. Hills, George P. Schultz, Paul A. Volcker, and Ernesto Zedillo. The PIIE paper cited by Barbier was A Green Global Recovery? Assessing US Economic Stimulus and the Prospects for International Coordination

The multiple crises threatening the world economy today demand the same kind of initiative as shown by Roosevelt’s New Deal in the 1930s, but at the global scale and embracing a wider vision. (p. 5)

In an article by VOX titled Alexandria Ocasio-Cortez is making the Green New Deal a 2020 litmus test, it stated,

Until now, the Green New Deal has been more of an idea than an actual policy. This week, an Ocasio-Cortez resolution is set to make its debut. The plan prioritizes climate change, but its strength lies in its symbolic ties to one of the Democratic party’s biggest historical successes: the original New Deal under President Franklin Delano Roosevelt.

The comparison to Franklin Delano Roosevelt has been prominent from the first day that Ocasio-Cortez became a public figure.

If rewritten to current Green New Deal standards, it would look like this:

The report Rethinking the Economic Recovery: A Global Green New Deal made five nutty predictions, all of which have failed miserably.

Currently, the price of oil is $59, the rise in greenhouse gas emissions is not on its way to a 45 percent increase by 2030, the world economy never sustained losses of 5-10 percent of GDP, ecological degradation is not quantifiable, water scarcity is a myth and poverty levels of people with less than $2.00 per day is only 767 million (World Bank, 2018).

The predictions from the current iteration of the Green New deal are just as crazy as the Global Green New Deal from 2009.

The modern “creators” of the Green New Deal claim that they developed it over a weekend. If true, it was only because they had a copy of Rethinking the Economic Recovery: A Global Green New Deal sitting in front of them to copy text and then localizing it for the United States.

Furthermore, these policies are not popular with the American people, as constantly claimed, but have been consistently rejected by citizens.

The Green New Deal is simply not a movement of the people, nor has it ever been. Rather, it has been purposely created by the same global elite that started Sustainable Development in the first place, namely, by members of the Trilateral Commission and the Club of Rome working through the auspices of the United Nations Environmental Programme.

Shame on you Green New Deal ideologues. Plagiarism by any other name is still plagiarism. You will be rejected as certainly as the global elite has already been rejected.

Update: An alert reader submitted additional documents that demonstrate Green New Deal promotion one year prior to Barbier’s report mentioned above. Most of this emanated from Great Britain.

Note: tip of the hat to Dr. Willie Soon for forwarding this story to me, as originally highlighted in an email by Joseph Bast of The Heartland Institute.

Technocracy: A Clear And Present Danger Of Epic Magnitude

Well according to this man: https://www.youtube.com/watch?v=1h5iv6sECGU&feature=youtu.be Alexandria is an actress. I’m sure her handlers got from the UN program. According to ‘Ragan’ they are scary people.

Interesting…I thought she was a bar tender.