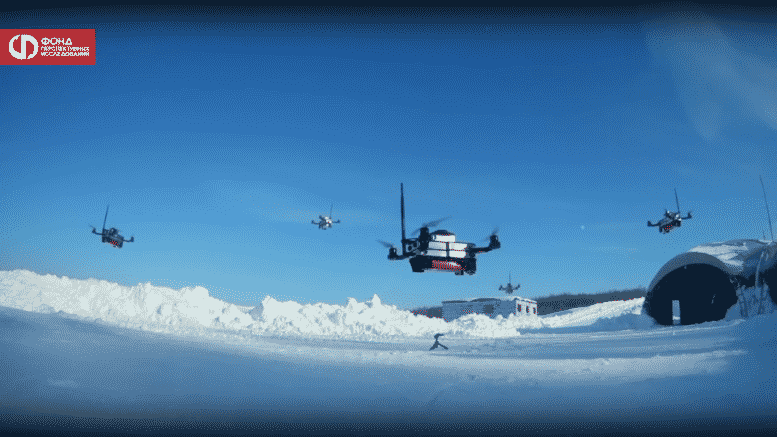 Please Share This Story!
PDF 📄
Talk of a ban on autonomous killer robots is useless chatter as the arms race between superpowers progresses. AI and networking are enabling fearsome weapons systems that can kill without human intervention. ⁃ TN Editor

AI-controlled mini-tanks and swarms of autonomous cat-sized drones obliterate targets in the propaganda clip released by the Kremlin.

The robots are designed to assist Russian infantry, and are currently controlled by a human remotely.

However, in future the tech will be fully autonomous, meaning it can target and kill enemies without needing help from a human.

Russia’s Advanced Research Foundation (ARF), the military research division behind the new technology, said the ultimate goal is to have an army of robots controlled by AI.

“The evolution of combat robots is on the path of increasing the ability to perform tasks in autonomous mode with a gradual reduction in the role of the operator,” a spokesperson told C4ISRNET.

The video, uploaded to YouTube by the ARF, shows off the terrifying capabilities of the killer tech.

In it, a mini-tank is shown dashing over snow while targeting and firing at targets.

The deadly vehicle lines up with a soldier and is follow his line of sight, pointing its huge guns in whatever direction his rifle turns.

It seems to suggest that Russia’s AI tanks will one day autonomously follow their handler’s aim to dish out extra firepower.

As well as mini-tanks, the video also shows off Russia’s military drone technology.

A swarm of quadrocopters rises up in a coordinated shape and whizzes across the firing range.

They appear to drop explosives on targets, leaving them smouldering in the snow.

Russia is not the only country developing autonomous weapons.