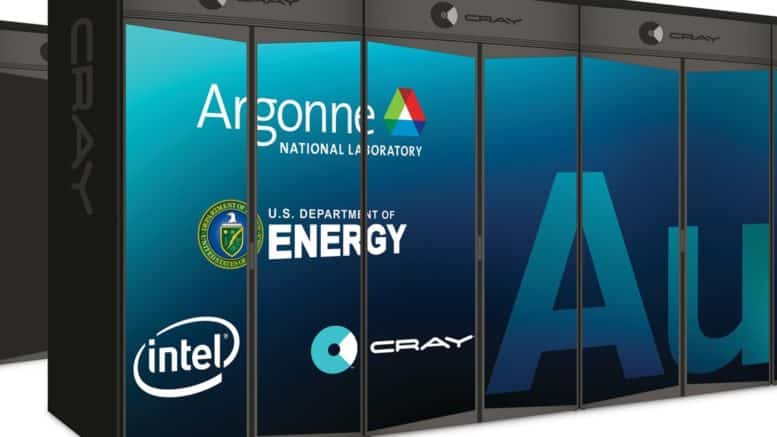 Please Share This Story!
PDF 📄
Computer development is expected by Intel, but technocrats within the Department of Energy have stretched their mission statement to include computer development in a public-private partnership arrangement. ⁃ TN Editor

Intel and the US Department of Energy announced Monday that they would build Aurora, described as the US’s first exascale supercomputer.

To put that in perspective: If every person on Earth did one calculation (say, a math problem involving algebra) per second, it would take everyone over four years to do all the calculations Aurora could do in one second.

Intel and the US Department of Energy said Aurora would be the US’s first exascale supercomputer, with a performance of 1 exaflop, when it’s completed in 2021.

That kind of number-crunching brawn, the computer’s creators hope, will enable great leaps in everything from cancer research to renewable-energy development.

Aurora, set to be developed by Intel and its subcontractor Cray at the Energy Department’s Argonne National Laboratory in Chicago, would far surpass the abilities of supercomputers today.

It’s likely to be the most powerful supercomputer in not just the US but the world, though Rick Stevens, an associate laboratory director at Argonne, said that other countriesmight also be working on exascale supercomputers.

The effort marks a “transformational” moment in the evolution of high-performance computing, Rajeeb Hazra, an Intel corporate vice president and general manager of its enterprise and government group, told Business Insider.

What Aurora could do

A computer that powerful is no small thing. Though Intel didn’t unveil the technical details of the system, supercomputers typically cover thousands of square feet and have thousands of nodes.

When it’s finished, this supercomputer should be able to do space simulations, drug discovery, and more. The government said it planned to use it to develop applications in science, energy, and defense. Aurora could also be used by universities and national labs.