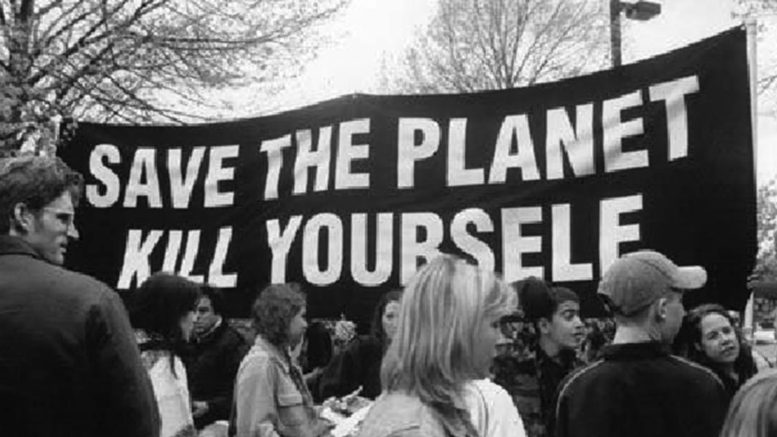 The radical animal rights group PETA states, “Mankind is a cancer; we’re the biggest blight on the face of the earth.”  It’s hard to imagine such blatantly illogical anti-human rhetoric delivered by other humans, and yet the whole radical environmental movement is in sync with this ideology that man is the cause of everything bad on earth. ⁃ TN Editor

Technocratic environmentalists converted and perverted environmentalism from a necessary and better way of living in the world to a destructive, controlling, political weapon. We needed environmentalism because it is illogical to soil our nest. Unfortunately, environmentalists seized the moral high ground by claiming that only they cared. They saw the overwhelming power the guilt trip that humans are destroying the planet gave them. They said everyone else lives dissolute, polluting, Earth-destroying lives and that can’t continue. They can save the Earth if we follow their directions.  The guilt trip message became the dominant view, despite the fact it defies logic and jeopardizes sensible actions. Sadly, it was not about the environment; it was about control of the number of people and how they behave.

A subset of the destruction of environmentalism was the diversion and perversion of climatology for population reduction and control. The simple theme behind the work of the Intergovernmental Panel on Climate Change (IPCC) is that the sky is falling because of how you ignorant humans behaved. Give us total control through a UN government funded by a carbon tax, and we can set things right. If you don’t act immediately, there are only 12 years left. This was the message that emerged from the technocrats and bureaucrats at the recent climate Conference of the Parties (COP24) in Poland.

Central to these claims is that the quickest and easiest solution is to reduce the number of people dramatically. They succeeded in convincing sensible people that the biggest problem is overpopulation. They achieved this because they were the ones who claimed that overpopulation is the problem. They created the strawmen of overpopulation and human-caused global warming, identified the problems they claimed it created, then offered only their solutions. Even the Pope was prey to these threats, although his socialist views, indicated he would go along.

We witnessed the bizarre political bedfellows of a Roman Catholic Pope, working with Pantheist Hans Schellnhuber Director of the Potsdam Institute for Climate Impact Research (PIK) and Naomi Klein, a world-level social activist, and critic of capitalism, to prepare his Encyclical “Laudato Si.”. This is undoubtedly one of the strangest documents in history. Here is a quote that is more likely to come from an extreme environmentalist manifesto than the head of the Catholic Church.

This sister (Mother Earth) now cries out to us because of the harm we have inflicted on her by our irresponsible use and abuse of the goods with which God has endowed her. We have come to see ourselves as her lords and masters, entitled to plunder her at will. The violence present in our hearts, wounded by sin, is also reflected in the symptoms of sickness evident in the soil, in the water, in the air and in all forms of life. This is why the earth herself, burdened and laid waste, is among the most abandoned and maltreated of our poor; she “groans in travail” (Rom 8:22).

This blindly overlooks that God also put us here and determined our behavior. In a classic example of deferential blame, the document states,

It would hardly be helpful to describe symptoms without acknowledging the human origins of the ecological crisis. A certain way of understanding human life and activity has gone awry, to the serious detriment of the world around us. Should we not pause and consider this? At this stage, I propose that we focus on the dominant technocratic paradigm and the place of human beings and of human action in the world.

Remember, this is a document with claims from a person with the ridiculous claim that he alone is infallible. He cannot be wrong. It is those damn humans who are to blame. But there it is; the solution is the “dominant technocratic paradigm.”

The assumption that humans are a blight and to blame for every change that occurs is central to their position. The Club of Rome (COR) set the foundation to this false ideology when they wrote in The First Global Revolution,

“The common enemy of humanity is man. In searching for a new enemy to unite us, we came up with the idea that pollution, the threat of global warming, water shortages, famine and the like would fit the bill. All these dangers are caused by human intervention, and it is only through changed attitudes and behavior that they can be overcome. The real enemy then, is humanity itself.”

Do as we tell you and we will save you from self-destruction. The paradox is that they believe in Darwin’s views and yet their position as stated is in contradiction to them. If we are animals as Darwin claims, then everything we do is normal and natural. In the 1990 Greenpeace Report on global warming edited by Dr. Jeremy Leggett, it says, “Carbon dioxide is added to the atmosphere naturally and unnaturally. The statement is meaningless unless you are saying that the unnatural portion is from humans. Then it becomes more meaningless unless you assume that humans are unnatural.

It is illogical to say, or even imply, that humans are natural but what we do is unnatural. Nonetheless, this is the absolute contradiction created by the use of environmentalism for a political agenda. Why isn’t everything humans do part of evolution? Why aren’t development, industry, economy, or anything else we do, part of the natural order? What does the COR mean when they say, “human intervention”? Why do they claim it is a danger?

The answer effectively began in 1859 when Darwin published the first edition of On the Origin of Species. It went through several editions as he received feedback. Herbert Spencer made many comments, but one of them Darwin thought summarized his thesis so well that he included it in the 1869 Fifth Edition. The more extensive quote from Spencer says,

Darwin particularly liked the phrase “the survival of the fittest” as a summary of his overall views. Remember, Thomas Malthus greatly influenced Darwin who took a copy of his major work, “An Essay on the Principles of Population” on his trip to the Galapagos Islands.

Darwin’s inclusion of this phrase is also likely due to the influence of Alfred Russel Wallace. Before Darwin published in 1859, Wallace sent him an essay reporting and analyzing his work in Asia. It reached the same conclusions as Darwin. The difference was Darwin, as Wallace pointed out, made no mention of humans in his First edition. Wallace said any theory that omitted humans and did not explain how they were so markedly different than all the other species, failed.

The difference is so significant that science avoided the implications of the answer ever since. Ironically, Darwin created the situation that science and society avoided when his theory became the weapon used to eliminate religion and God. Removing God removed the explanation for the difference and made it a challenge to science.  Wallace tried, like many since, to offer a compromise. He didn’t use the phrase, ‘intelligent being’ but implied such an entity might provide an answer.

The ‘difference’ problem remains unanswered. Environmentalists don’t address it but create the paradox, that we are animals like all the rest, but not behaving appropriately like all the other unintelligent, obedient, animals. Ingrid Newkirk, co-founder and president of People for the Ethical Treatment of Animals (PETA), provides an excellent example of this thinking because it is extreme.

“Mankind is a cancer; we’re the biggest blight on the face of the earth.” “If you haven’t given voluntary human extinction much thought before, the idea of a world with no people in it may seem strange. But, if you give it a chance, I think you might agree that the extinction of Homo Sapiens would mean survival for millions if not billions, of Earth-dwelling species. Phasing out the human race will solve every problem on earth, social and environmental.”

Newkirk doesn’t realize that the Earth only exists because of human superiority. No other species is aware that the Earth exists. Newkirk’s ‘phase out’ suggestion implies a gradual elimination. I agree, as long as we begin with Newkirk and all technocratic environmentalists. Once we get rid of them, then, as free-thinking humans, we can reassess the situation and determine that the problem no longer exists, and we can get on with evolving. Part of that will include explaining how humans are so radically different and superior to all other species, with every right to exist.

Dr. Tim Ball is a renowned environmental consultant and former professor of climatology at the University of Winnipeg. He has served on many local and national committees and as Chair of Provincial boards on water management, environmental issues and sustainable development. Dr. Ball's extensive science background in climatology, especially the reconstruction of past climates and the impact of climate change on human history and the human condition, made him the perfect choice as the Chief Science Adviser with the International Climate Science Coalition.
2
0
0
2

Why do not these guys ever do what they teach, set an example, and follow their own slogan on the banners? No, that would be too good, right? Only for others – do as we say, not as we do…