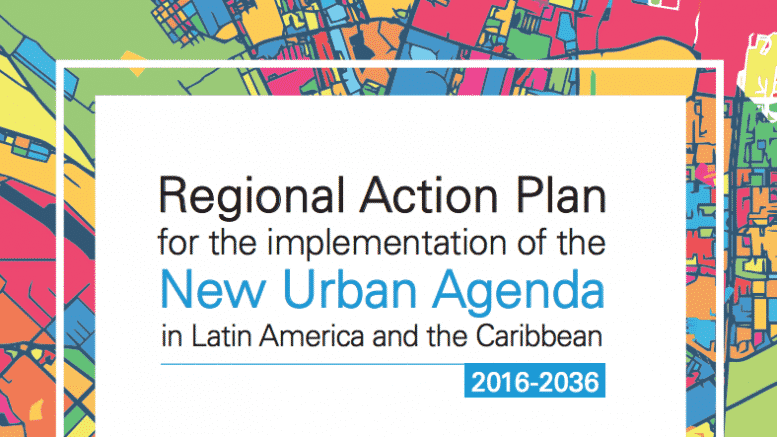 The main outcome of Habitat III held in October 2016, was  “the adoption of the final New Urban Agenda (NUA) document as the new mandate for the development of cities and human settlements during the next 20 years.” The U.N. is now meddling with Latin America to impose its Technocratic tyranny on unsuspecting city-dwellers. ⁃ TN Editor

An action plan for implementing the New Urban Agenda (NUA) in Latin America and the Caribbean envisions the city as a “macro-level public good” where citizens’ economic, social, cultural and environmental rights are guaranteed.

The RAP argues that current regional policies have failed to successfully address unsustainable urban trends. Therefore, structural changes are required that place sustainability and equality at the center of the urbanization process. It provides a road map of potential actions, interventions and evidence-based policy guidance for LAC countries towards achieving sustainable urban development, and establishing a more equitable urban paradigm.

The RAP contains six action areas, namely: national urban policies; urban legal frameworks; urban and territorial planning and design; urban economy and municipal finances; local implementation; and monitoring, reporting and revision mechanisms. These action areas and their strategic objectives comprise the key components necessary for implementing the NUA in LAC. The document describes enabling conditions and essential elements for each area, and how each is aligned with specific SDGs and related targets.

While aimed at implementing the NUA in the region, the RAP will also enable the building of synergies with other global agreements and agendas, such as the 2030 Agenda for Sustainable Development, the Sendai Framework for Disaster Risk Reduction (DRR) and the Paris Agreement on climate change, among others. The RAP was designed for the region as a whole, but it can also be used to evaluate needs and actions at the subregional, national and local levels. [Publication: Regional Action Plan for the Implementation of the NUA in LAC: 2016-2036]

Okay, lets just call this what it truly is. UN Agenda 21/2030. Nothing else. You should (do) know that. The UN keeps changing the name but it is all the same plan. Keep it real.