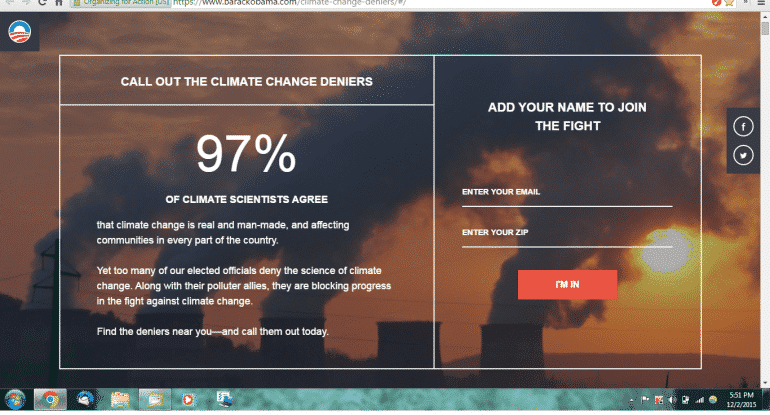 TN Note: Ok. Obama wants to call out the “deniers” to “name and shame” them. They should be careful what they wish for, because they are about to experience the fury of the American public and many top climatologists and other scientists who have already thoroughly debunked global warming. We will start with the first lie: “97% OF CLIMATE SCIENTISTS AGREE that climate change is real an man-made.” This is a bald-faced lie and a figure they pulled out of thin air. The prestigous National Association of Scholars writes that those who disagree, many strongly so, amount to 40% and are pointedly against Obama’s propaganda machine. Even the Wall Street Journal wrote, “The Myth of the Climate Change ‘97%'”‘

Bring it on guys. The truth is going to win and it will send you packing back to kindergarten science class where you belong.

PJ Media – It’s always been clear that to Barack Obama, his only real enemies are his political enemies, including all conservatives, the entire GOP and everyone who resists “fundamental transformation.” I wish I was making this up, but I’m not. It’s from the president of the United States’s “community organizing” non-profit group, Organizing for Action:

97% OF CLIMATE SCIENTISTS AGREE that climate change is real and man-made, and affecting communities in every part of the country.Yet too many of our elected officials deny the science of climate change. Along with their polluter allies, they are blocking progress in the fight against climate change.

Find the deniers near you—and call them out today.

There follows a list of so-called “deniers” — the Holocaust terminology is both offensive and deliberate — with thumbnail pictures of folks like Mitch McConnell, Marco Rubio and Paul Ryan, with a button below each so the Obamabots can call them out. If this isn’t enough, the other side of the page consists of a form by which the Believers can “Find Deniers” simply by typing in the name of a suspect.

Obama’s National Socialist shock troops (as long as we’re invoking WWII, two can play at that game) need to hear about this, and someone — Ted Cruz? Donald Trump? Ben Carson? — needs to rub their nasty fascist noses in it before things get entirely out of hand.