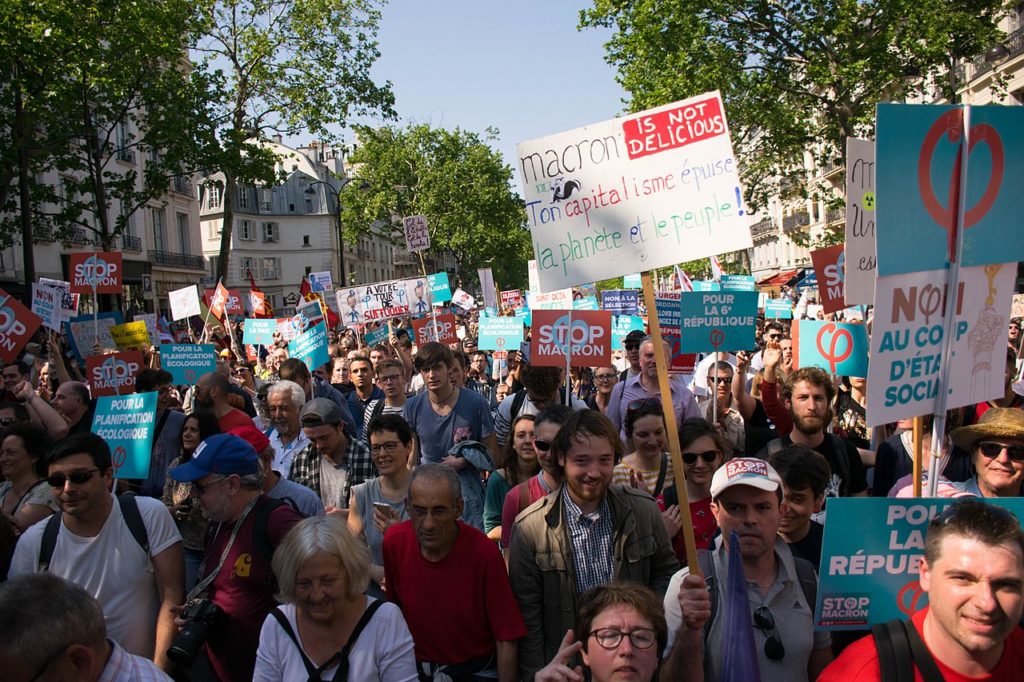 The ‘Yellow Vest’ movement in France has its own problems, but it’s chagrin for Macron’s Technocrat policies is in plain view. The outcome if far from being clear, but the Euro-elite are frightened and on the defensive. ⁃ TN Editor

Jean-Baptiste Moreau, a farmer who splits his time between parliament and his cow sheds, thought he would be part of the solution to France’s political problems when he was elected.

The 41-year-old won a seat in parliament in June 2017 in what some commentators termed a “velvet revolution” led by President Emmanuel Macron, which saw grumpy voters turf out a whole generation of MPs from the country’s main political parties.

Macron’s victorious centrist movement filled half its parliamentary seats with people who had never held political office before, including Moreau, who posted a picture on Twitter of himself delivering a calf on Christmas Day.

But less than two years after the biggest turnover in political personnel in 60 years, France has faced another anti-elite revolt led by “yellow vest” protesters commanding widespread public support.

“Given the weight of the legislative agenda, we’ve been very busy in the parliament and in Paris and not on the ground enough explaining how we want to do politics differently,” Moreau said in an interview.

“And perhaps we’ve not been different enough from our predecessors,” the MP from the central Creuse region told AFP in what he called a “mea culpa”.

The failure of Macron’s bid to restore faith in politicians in France could have repercussions in a country where anti-establishment far-right and far-left parties have never been so popular.

When asked to sum up their feelings towards them, 37 percent said they felt “distrust”, 32 percent “disgust”, eight percent “boredom” and four percent “fear”.

Only France’s roughly 35,000 mayors, seen as close to the people they represent, inspired confidence in a majority of people.

Overall, cynicism was at its highest level since Cevipof began its surveys in 2007, before the presidencies of Nicolas Sarkozy and Francois Hollande, which were both judged harshly by French voters.

“The surge in confidence hoped for by Emmanuel Macron after his election has not materialised,” Cevipof director Martial Foucault commented last week, calling the results “alarming”.

Many of the new MPs in Macron’s Republic on the Move (LREM) party have been shocked by the abuse directed at them since the “yellow vest” protesters from rural and small-town France took to the streets in late November.

Bruno Questel, a northern MP, was shaken in mid-December when someone fired six gunshots in front of his house shortly before midnight which was followed by a noisy demonstration of around 40 people.

“I was stunned. We’ve reached a new level of aggressiveness,” he told AFP, adding that the crowd insulted and threatened him when he went outside to reason with them.

“I don’t think any MP deserves to have gunshots in front of his house.”

Around 50 of Macron’s 305 MPs say they have been victims of some form of intimidation.

In other incidents, protesters have smashed a forklift truck through the doors of a ministry building, guillotined an effigy of Macron, and daubed graffiti on the Arc de Triomphe, one of the symbols of the French republic.

Macron has interpreted the protests as a sign of impatience from an electorate desperate for change — for lower taxes, better public services and democratic reforms.

All of those were campaign promises from the 41-year-old ex-banker, who like many of his MPs had never been elected before becoming president.

Other research from Cevipof has shown that Macron’s MPs are mostly drawn from the middle or professional classes — with little experiences of the poverty and economic difficulties denounced by the “yellow vests”.

Historian Jean Garrigues calls the level of abuse directed at MPs “unprecedented” under the fifth republic, which began in 1958.

But this new wave of anti-elitism draws from deep sources, he says. 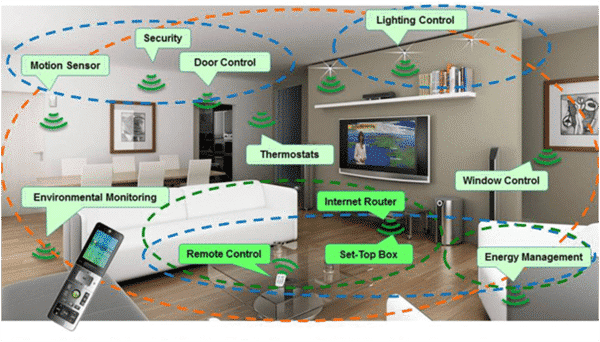 IoT promises Utopia but delivers a security train wreck. Consumers have virtually no chance of securely setting up a Smart Home because Technocrats have totally underestimated complexity and anti-hacking security.  ⁃ TN Editor

When a major electronics firm started seeing strange documents being printed out remotely on more than 100 of its smart printers late last year, it frantically contacted the manufacturer to investigate.

The firm nervously wondered how — and why — an unauthorized third party was sending documents to its printers remotely. And worse, it feared its entire corporate network had been breached. The manufacturer immediately called in the big guns, Charles Henderson, global head of X-Force Red, a professional hacking team at IBM Security, for answers.

“Unless you believe in ghosts, you get kind of concerned when your printer just starts printing stuff out that you can’t account for,” said Henderson, who declined to name the firm for privacy reasons.

His team quickly identified the problem as a flaw in the printer’s remote access function, and a patch fixed the vulnerability.

Finding and testing for flaws and breaches in smart devices is Henderson’s specialty. “I run a team of hackers,” is how Henderson describes his role, then clarifying they are paid professional hackers who look for bugs, glitches, and malfunctions.

And with demand for smart devices, ranging from smart lights to outdoor sprinklers, surging in mainstream America, his job has gotten a lot busier.

“We’ve received roughly five times the number of requests for security testing of IoT [internet of things] devices in the last year,” Henderson said. “Growth has been immense over the last year to 18 months.”

Indeed, the soaring popularity of smart speakers, like Amazon Echo and Google Home, is starting to move the “Smart Home” into mainstream America. It’s no longer just tech geeks and phone-obsessed millennials who are scouring the tech universe for information on the next best gadget that lets them control lights, TVs, appliances, door locks, and even lawn sprinklers with a voice command or tap on a smartphone.

But all of this buzz and hype are putting pressure on smart device makers to rush their gadgets into the market while demand is hot — and sometimes, this means security features take a back seat, Henderson said. And cyber criminals are watching.

Some get crafty, making mock interfaces on a person’s phone that look like an IoT’s interface login to steal passwords — similar to the way thieves send fake emails to people pretending to be from credit card companies and banks.

Experts caution consumers to research carefully and move diligently when adding smart devices to their home network. “If one device gets compromised, it could be the same as allowing an attacker to plug into the entire network,” giving the criminalcontrol over all devices, Henderson warned.

Concerns about privacy and the complexity of smart home devices are two reasons fully outfitted smart homes are not likely to happen overnight, experts say.

Wanting — and actually installing — smart devices are very different scenarios with the latter requiring patience and diligent research in navigating through a costly, cumbersome and often time-consuming process. 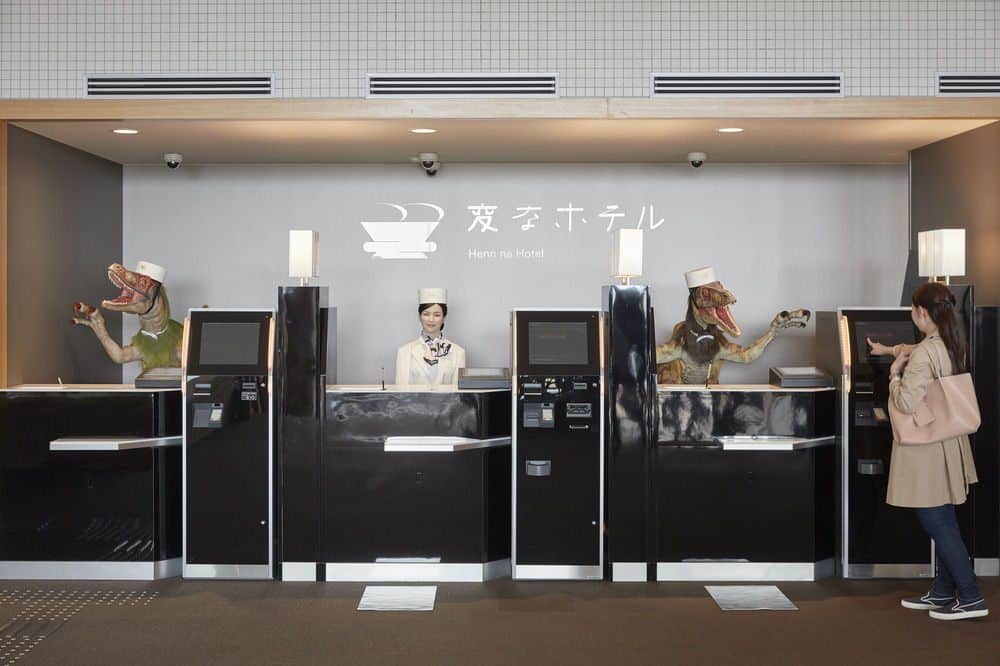 The Japanese hotel was opened with much fanfare in March 2017 as the world’s first robot-run hotel. TN wrote then, “They built it, but will anyone come?” Guests did try it out, but repudiated the whole thing with a myriad of complaints about the robots themselves. ⁃ TN Editor

A Japanese hotel reportedly fired half of its nearly 250 robot staff following various complaints from guests.

Henn-na Hotel, which employs various robots from check-in staff to in-room help, reportedly decided to lay off half of its robot employees after they proved to be more of a nuisance than a benefit.

According to CNET, “Henn-na’s robot staff was first employed in 2015 with the aim of becoming ‘the most efficient hotel in the world.’ But four years later, it seems that the 243 robots are less of a novelty and more of a nuisance. As a result, the Henn-na Hotel has fired half of them.”
CNET reported that a number of guests had complained about the robots, which allegedly woke them up in the middle of the night, interrupted conversations, and struggled to “answer basic guest questions without human help.”

“Bellhop robots were designed to carry luggage, but they could only move on flat surfaces and could only access a small number of rooms,” explained CNET. “Their hotel careers were also cut short.”

On Henn-na Hotel’s website, the hotel claims to be “the world-first hotel staffed by robots.”