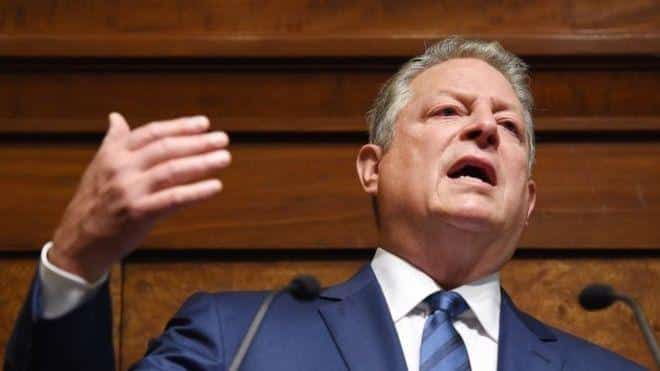 The UK government should “resume” its leadership on climate change, former US Vice-President Al Gore has urged.

Mr Gore said he was “puzzled” by the government’s wholesale cuts to subsidies for renewable energy.

And he issued a veiled taunt to Prime Minister David Cameron by implying that Chancellor George Osborne had seized renewables policy.

The government insists it will continue with world-leading policies on climate change.

The independent Climate Change Committee believes Mr Osborne will provide enough cash for the next tranche of renewables investment after 2020 to keep the UK on track with its world-leading Climate Change Act.

But Mr Gore, speaking at a CBI/Green Alliance event in London, said he could not understand recent decisions to cut subsidies for wind, solar, energy efficiency and biomass – then to impose a carbon tax on renewables that emit no carbon.

In a speech interrupted by applause, he asked: “Will our children ask, why didn’t you act? Or [will they] ask, how did you find the moral courage to rise up and change?

“The UK’s historic legacy of leadership on the most important moral issues faced by humanity, including the climate crisis, is long and has been recognised with respect by the community of nations.

“It is time for the UK government to honour and live up to that legacy, and return to its global leadership position, domestically and abroad, by supporting an ambitious international agreement in Paris that unleashes the power of the private sector to create a global clean energy economy.”

He said fossil fuels have enjoyed subsidies at least 44 times as high as those for renewable energy – and he said he believed nuclear power would play a minor part in future energy systems.