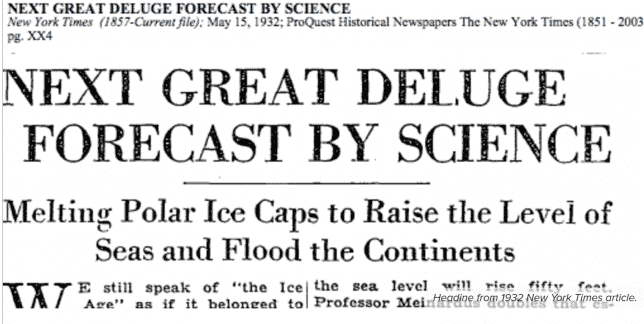 Al Gore and the United Nations have a bitter pill to swallow, but given their religious zeal for self-deception, it is likely they will ignore and then bury this report. Since Technocrat life centers around their ‘razor-sharp’ science, they cannot tolerate criticism or legitimate scientific discussion. ⁃ TN Editor

Climate alarmists have finally admitted that they’ve got it wrong on global warming.

This is the inescapable conclusion of a landmark paper, published in Nature Geoscience, which finally admits that the computer models have overstated the impact of carbon dioxide on climate and that the planet is warming more slowly than predicted.

The paper – titled Emission budgets and pathways consistent with limiting warming to 1.5 °C –  concedes that it is now almost impossible that the doomsday predictions made in the last IPCC Assessment Report of 1.5 degrees C warming above pre-industrial levels by 2022 will come true.

In order for that to happen, temperatures would have to rise by a massive 0.5 degrees C in five years.

Since global mean temperatures rarely rise by even as much as 0.25 degrees C in a decade, that would mean the planet would have to do 20 years’ worth of extreme warming in the space of the next five years.

This, the scientists admit, is next to impossible. Which means their “carbon budget” – the amount of CO2 they say is needed to increase global warming by a certain degree – is wrong. This in turn means that the computer models they’ve been using to scare the world with tales of man-made climate doom are wrong too.

One researcher – from the alarmist side of the argument, not the skeptical one – has described the paper’s conclusion as “breathtaking” in its implications.

In other words, this represents the most massive climbdown from the alarmist camp.

But you certainly wouldn’t guess this from the way the scientists are trying to spin their report.

According to the London Times:

Michael Grubb, professor of international energy and climate change at University College London and one ofthe study’s authors, admitted that his previous prediction had been wrong.

He stated during the climate summit in Paris in December 2015: “All the evidence from the past 15 years leads me to conclude that actually delivering 1.5C is simply incompatible with democracy.”

Speaking to The Times, he said: “When the facts change, I change my mind, as Keynes said.

“It’s still likely to be very difficult to achieve these kind of changes quickly enough but we are in a better place than I thought.”

He said that the group of about a dozen computer models, produced by government research institutes and universities around the world, had been assembled a decade ago “so it’s not that surprising that it’s starting to divert a little bit from observations”.

He said that too many of the models used “were on the hot side”, meaning they forecast too much warming.

Grubb is claiming that the facts have changed. Which they haven’t. Climate skeptics have been saying for years that the IPCC climate models have been running “too hot.” Indeed, the Global Warming Policy Foundation produced a paper stating this three years ago. Naturally it was ignored by alarmists who have always sought to marginalize the GWPF as a denialist institution which they claim – erroneously – is in the pay of sinister fossil fuel interests.

Yea— all fake news. Just ask Rush Limbaugh who said the the request to evacuate was all fake based on the fake news about the hurricane. Make that Hurricanes. And the record floods, and droughts all predicted by the standard AGE models.

But like all AgW deniers, Mr. Limbaugh and Mr. Trump, and this author are, literally dumber than fish and plants http://dnusbaum.com/AGWdeniers.html

Such blatant fudging should result in jail time, considering the potential impact of “swaying public opinion about global warming”. The fudge that jumped out at me was “UN predicts a 1.5oC temperature rise by 2022” – no they didn’t!! They talk of limiting the warming to 1.5oC THIS CENTURY.