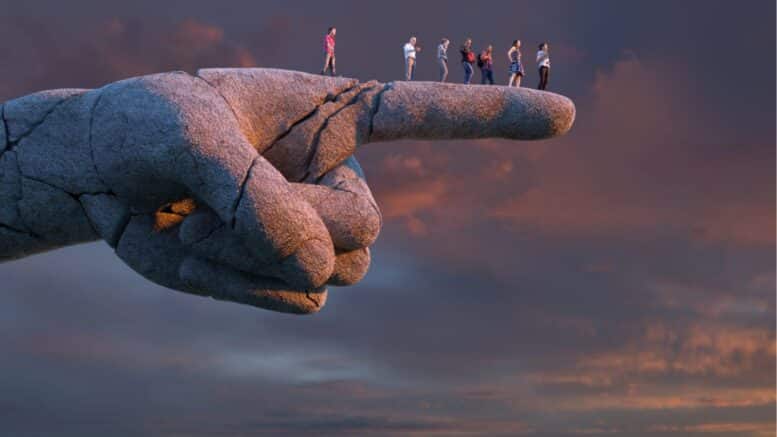 Please Share This Story!
PDF 📄
As Technocracy crushes personal human autonomy, government by citizen representation and true scientific innovation, the world is reverting back to tribalism and neo-feudalism. This is the regression of civilization, dominated by the priestly-kings of pseudo-science. ⁃ TN Editor

Daniel Hannan – Lord Hannan of Kingsclere – is today among Britain’s wisest and most articulate champions of classical liberalism. He’s also today very pessimistic about the future of liberalism. This pessimism is on full display in this recent video. Hannan predicts that the post-Covid-19 world “will be poorer, colder, grayer, more pitched, more authoritarian.”

I ardently wish that I found his stated reasons for pessimism to be unpersuasive, but this wish is not granted. Hannan’s pessimism, to me, seems warranted.

I urge you to watch the entire video. At under seven minutes, it’s short. But I believe that my summary here of Hannan’s point is accurate:

We humans are evolved to put our trust in hierarchy, for hierarchical methods of decision-making were quite effective at protecting the small tribe, as it roamed the countryside, from predators and privation. And our deep past was in fact fraught with dangers that, when not quickly avoided, killed us. In that long-ago era, anyone refusing to follow the leader’s commands was indeed a threat to the survival of the tribe. As a result, fellow tribe members turned on renegades. ‘Renegadeness’ was thus largely drained from the gene pool and replaced with the instinct to conform, especially whenever there was a perception of danger, which there was quite often.

Confidence in hierarchy, hair-trigger alarm, and fear of strangers (who back then usually were sources of real danger) helped our ancestors to survive. And survive they did for 300,000 years, nearly all of which time was spent hunting and gathering in small tribes. But these genetically encoded instincts that are so useful to members of the always-imperiled tribe do not support a liberal, open society of the sort that arose in the West over the past few centuries.

We humans have been around for at least 300,000 years. Nearly all – 97 percent – of this time was spent as hunters-gatherers in a perilous world. Yet only in the past two or three centuries have we stumbled upon a set of beliefs and institutions that suppressed many of our primitive instincts in a way that encouraged the emergence of modernity. By historical standards, the world that we know today is freakishly abnormal.

And while the material blessings of modernity – the likes of indoor plumbing, endless supplies and varieties of food, dwellings with solid floors and roofs, artificial lighting, faster-than-galloping-horses transportation, and miracle medicines – are easily noticed, all of these blessings as we know them today require a deep and globe-spanning division of labor. This division of labor is more unlikely and (hence) more of a marvel than are any of its most stupendous fruits, such as antibiotics, airplanes, and astronauts.

Modernity is not normal; it has been around for a paltry 0.1 percent of humans’ time on earth. And the reason modernity is not normal is that liberalism – the source of the division of labor and, thus, of modernity – is not normal. We humans are not genetically encoded to be liberal. Therefore, Hannan argues, there is every reason to expect that we humans will revert to our historical norm – the norm that is in our genes.

The reaction to Covid-19 is powerful evidence that our primitive instincts remain alive and ready to reestablish their dominance over the happy accident that is the culture, and resulting institutions, of liberalism. The hysterical fear that Covid stirred in so many people – including in many who are highly educated, of a scientific mindset, and, until Covid, of a liberal bent – and the sheepishness with which people followed the “leaders” who promised protection from Covid prompts Dan Hannan to worry that 2020-2021 is the beginning of the end of modernity.

Chances are high that he’s correct. And if he is, civilization as we know it will end.

Modernity Is Not Natural

My Hannan-like pessimism on this front is only furthered by reading Notre Dame philosopher James Otteson’s remarkable new book, Seven Deadly Economic Sins. This must-read work is not about Covid; nor is Otteson himself especially pessimistic. But in his luminous explanation of some of the foundational features of modern society, Otteson identifies the thinness of the reed upon which modernity rests. His Chapter 4 (“Progress Is Not Inevitable”) is worth quoting at length:

What has changed over humanity’s recent history is not biology, psychology, physiology, ecology, or geography. What has changed, instead, is their attitudes. As economic historian Deirdre McCloskey has demonstrated in her magisterial three-volume investigation under the general title The Bourgeois Era, the most salient factor distinguishing the post-1800 era from anything that went before is the attitudes people held toward others. Before that period, the standard background assumption people had was that some people are superior to others – more specifically, one’s own people are superior to those other people – and hence people believed they were under no obligation, moral or otherwise, to treat all human beings as their moral equals. What began as an inkling in the sixteenth century, gained some traction in the seventeenth century, and then began to spread in the eighteenth century was the idea that cooperation was not only allowable, but morally appropriate; and not only with some people, but with ever more people and ever more groups of people. As that idea spread, more and more cooperative behavior was engaged in, leading to mutually beneficial exchanges and partnerships, which launched world prosperity on the precipitate upward slope we have seen since.

If people are to engage in voluntary transactions and partnerships with one another, however, they also need to trust one another….

[C]ulture is critically important for growing prosperity, but culture can change – and quickly. The culture that enabled the growth in worldwide prosperity we have experienced over the last two centuries is not only recent but rare. And it is fragile…..

People have gone from a default of regarding people different from them with suspicion and as likely enemies to a default of viewing them at least neutrally and even as opportunities. They have gone from viewing trade, commerce, and mutually voluntary and mutually beneficial exchange as unworthy of virtuous human beings, to viewing it neutrally, to, finally, viewing it as at least possibly worthy of dedicating one’s life to. They have gone from viewing human beings as fungible atoms in undifferentiated masses to seeing them as unique and precious individuals possessing moral dignity and deserving both liberty and respect. They have gone from viewing violence and torture as acceptable, even natural, ways to treat and engage with others to believing that violence should be a regrettable last resort – and that torture is inhumane and should be minimized, if not abandoned altogether. And they have gone from automatically distrusting everyone they meet but do not know to increasingly being willing to extend to others, even strangers, the benefit of the doubt.

Abruptly starting 16 months ago, modern men and women were not only given license to revert to atavistic dread of strangers, but positively encouraged to harbor such dread and to act on it. Such atavistic attitudes and actions came all too naturally.

Abruptly starting 16 months ago, humanity was encouraged to hold in contempt – even to censor – the relative few persons who refused to abandon liberal sensibilities.

Abruptly starting 16 months ago, we prostrated our panicked selves before our “leaders,” begging that they use their god-like knowledge and powers (called “the Science”) to safeguard us from one particular source of illness, believed to be demonic.

Abruptly starting 16 months ago, there quite possibly began the end of liberal civilization.

They have been talking about it for years, even in the 1800’s. A New Age of Enlightenment, the evolution of godhead, survival of the fittest. If you refuse to evolve into godhood with the collective you will be destroyed. Everyone must comply and realize their christ consciousness, and they will not allow the none compliant to let them not complete this last stage of evolution. They are crazy. Yes, Satan does exist and this is his most famous lie. As he told Eve, ” And the serpent said unto the woman, Ye shall not surely die: for God doth know… Read more »