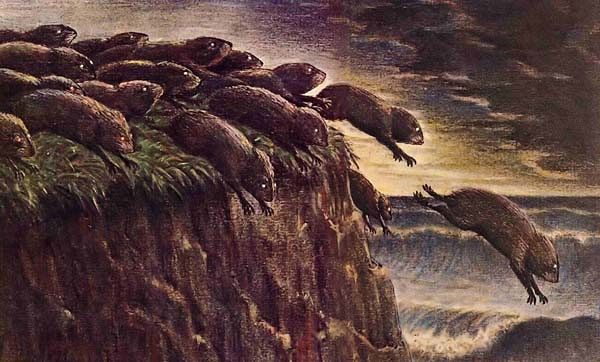 Please Share This Story!
PDF 📄
As Technocracy/Sustainable Development is drilled into everyone’s skull, anti-human groupthink increases exponentially as a direct result. This self-destructive behavior could be likened to the proverbial lemmings-over-the-cliff who voluntarily plunge to their death for no particular reason. ⁃ TN Editor

Adherents view life not as a gift and a miracle, but a harm and an imposition. And their notion that having children may be a bad idea seems to be gaining mainstream popularity

n February, a 27-year-old Indian man named Raphael Samuel announced plans for an unusual lawsuit. He was going to sue his parents for begetting him. “It was not our decision to be born,” he told the BBC. “Human existence is totally pointless.”

Samuel recently told me over Skype from Mumbai that his is a good life, and he is actually close to his parents. His complaint is more fundamental: he believes it is wrong to bring new people into the world without their consent. He wanted to sue his parents for a symbolic amount of money, such as a single rupee, “to instill that fear among parents in general. Because now parents don’t think before having a child,” he told me.

Samuel subscribes to a philosophy called anti-natalism. The basic tenet of anti-natalism is simple but, for most of us, profoundly counterintuitive: that life, even under the best of circumstances, is not a gift or a miracle, but rather a harm and an imposition. According to this logic, the question of whether to have a child is not just a personal choice but an ethical one – and the correct answer is always no.

Since his announcement, the lawsuit has not gotten off the ground. “I have been clearly told by a sitting judge that I will be fined by the court for wasting its time,” Samuel said. Still, his lawsuit gave the anti-natalist movement a boost, even earning a bemused mention by Stephen Colbert. In May, Dana Wells, a 37-year-old Dallas-based woman who goes by “The Friendly Antinatalist” on YouTube, posted a video featuring the Colbert clip and congratulating Samuel. “We all owe you a round of applause,” she said. “It feels like we’ve arrived. It feels like the big time!”

The notion that having children may be a bad idea seems to be gaining mainstream popularity. But when we hear about it, it’s most often in the context of the climate crisis: activists are worried about bringing children into a world threatened by rising seas, mass displacement and other calamities. Anti-natalists, however, believe that procreation has always been and always will be wrong because of life’s inevitable suffering. What is similar about both anti-natalists and climate activists is they are seeing an increase in attention due to general pessimism about the state of the world, giving both more opportunities to gain support.

In 2006, the South African philosopher David Benatar published a book which is widely credited with introducing the term anti-natalism. In Better Never to Have Been: The Harm of Coming into Existence, Benatar quotes the Greek tragedian Sophocles (“Never to have been born is best / But if we must see the light, the next best / Is quickly returning whence we came”) and the text of Ecclesiastes (“So I have praised the dead that are already dead more than the living that are yet alive; but better than both of them is he who has not yet been, who has not seen the evil work that is done under the sun”). These quotes suggest that the sentiments at the heart of anti-natalism have been around for a very long time.

In modern history, another strain of thought emerged, warning against the dangers of population growth. In the late 18th century, Thomas Malthus sounded the alarm that the population would outstrip the food supply. In 1968, a Stanford biologist named Paul Ehrlich published the bestselling book The Population Bomb and co-founded the organization Zero Population Growth (later renamed Population Connection), arguing that the growth in global population would lead to famines and ecological crisis. He also suggested that people have no more than two children.

One member of Zero Population Growth struck out on his own with a much more radical agenda. A man named Les Knight launched the Voluntary Human Extinction Movement (VHEMT) with the goal of “Phasing out the human race by voluntarily ceasing to breed”, as stated on the website that he launched in 1996.

While Benatar also sought to discourage reproduction, his ideas grew out of different premises. The objective of anti-natalism, as Benatar sees it, is to reduce human suffering. Since life inevitably involves some amount of suffering, bringing another person into the world introduces the guarantee of some harm. He argued that “the quality of even the best lives is very bad – and considerably worse than most people recognize it to be. Although it is obviously too late to prevent our own existence, it is not too late to prevent the existence of future possible people.”

Benatar told me recently that he has heard from many readers of his book who “have often felt that they were alone in the world. It was a great comfort to them to read a philosophical defense of a view they found intuitively correct.”

The roots of this is still the Elites old dream of eugenics and depopulation. Back to feudal society with Royals, Billionaires and peasants to bear their luggage and serve their drinks.

YES, that’s its roots for sure. Extirpation of the evil associated with the self-appointed elites has been slow and laborious for the rest of us.

I can’t disagree with the anti-natalists on most points. Earth is a violent place. No one can argue against that point with any credibility. Humanity lies at all levels of experience and education so differences abound. Evil represents itself as good, lies as truth. No one gets out alive (ha!) but everyone has to live through it once born. As Eastern religions teach–to live is to suffer–in some measure, even if privileged. I’m childless, by design. I’ve taken a lot of ridicule over my life from breeders for that choice. Things like: You must be selfish. You must be stupid.… Read more »