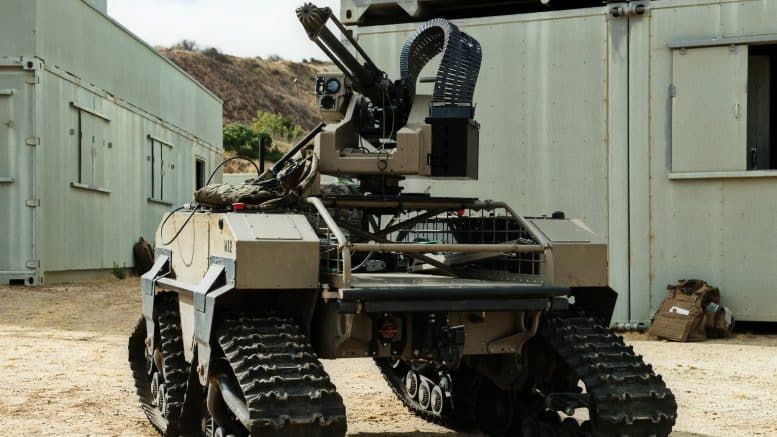 The military/industrial complex has been taken over by Technocrats who intend to prosecute war by armed robots. Two years ago, the military and civilian leaders said the armed robots would NOT be developed. They have not flip-flopped; rather, they simply lied to the public to mask their true intentions. ⁃ TN Editor

The new combat vehicles must be “optimized for fighting in dense urban terrain.” Fighting in narrow streets, in turn, requires smaller vehicles than the massive M1 — and one way to reduce weight is to take the humans out.

After 20 years of cancelled programs, the Army now wants prototypes of all-new robotic and “optionally manned” combat vehicles by 2019 so soldiers can begin field-testing them in 2020. Compared to current vehicles, they’ll be lighter, smaller and optimized for urban combat, said Brig. Gen. David Lesperance, head of the armor school at Fort Benning, Ga. and the hand-picked head of the service’s Cross-Functional Team on future ground vehicles.

Both established defense contractors and non-traditional companies are currently working on concepts, he told me and two other reporters this afternoon, and there’ll be intense experimentation, modeling, and simulation in the next “six to 12 months.”

Army Chief of Staff Mark Milley created the Cross Functional Teams last fall to advance his Big Six modernization priorities. What’s called Next-Generation Combat Vehicle (NGCV) is No. 2, second only to long-range artillery and missiles. Until this week, however, the CFTs have kept quiet. But Gen. Milley promised the Army would seek “radical,” ten-fold improvements in technology on a tight timeline. Lesperance’s proposal would definitely deliver on that promise — if it works.

The problem is the post-Cold War Army’s track record on new armored fighting vehicles is unblemished by success. (The successful Armored Multi-Purpose Vehicleis essentially a modified Bradley, not an all new design). While continually upgrading and modernizing the 1980s-vintage M1 Abrams tank and the M2 Bradley, the Pentagon has cancelled the M8 Armored Gun System (1997), the Crusader howitzer (2002), the Future Combat Systems (2009), and the Ground Combat Vehicle (2013). FCS in particular is the dead elephant in the room, because it was the Army’s last attempt at this kind of technological great leap forward, specifically including both manned and robotic vehicles.

Milley has said specifically his Big Six modernization program won’t repeat the mistakes of FCS, and there are grounds for hope. First, technology is just better. The private sector has made dramatic advances in computing power, artificial intelligenc and ground robots since FCS was cancelled in 2009, when the iPhone was in its infancy and self-driving cars were a fantasy.

The Army, for its part, is taking care to prototype the new technology before it commits to an acquisition program, unlike FCS. It has also abandoned the cumbersome mega-program approach of FCS, which was a single contract for eight manned vehicles, multiple ground robots and drones, and a mobile network to link them all. The Cross Functional Teams, by contrast, are loosely coupled. Lesperance’s combat vehicle team holds weekly video conferences with the others, and it’s working closely with the CFTs for the soldiers who’ll ride in it, the networkthat’ll connect it, and the simulators everyone will train in. But they are separate efforts that won’t all collapse with the failure of the weakest link

Will robot warriors improve the results if leadership remains mediocre?