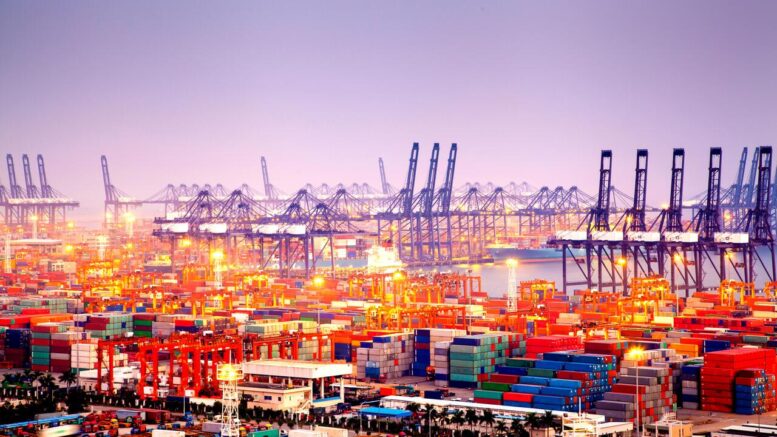 Please Share This Story!
PDF 📄
Before the war started in Ukraine, China was already headed into a huge economic abyss. The Hang Seng tech index has dropped 61% from its top last year, while the Nasdaq Golden Dragon China Index of U.S.-traded stocks has fallen 68%. Now the city of Shenzhen, China’s equivalent to Silicon Valley, has been shut down over COVID. ⁃ TN Editor

With war raging across the world’s bread basket, risk of World War 3 the highest it has been since the Cuban missile crisis, commodities hitting new all time highs every single day, inflation (even the watered down CPI version) set to hit 10% in a few months, and the Fed rushing to hike rates so high it slams the US into a pre-scripted recession (as it somehow hopes to make a “soft landing” even as fed funds futures signal a hard landing and at least 50 bps of rate cuts after the burst of hiking is over later this year), it is easy to forget that China is still around.

So here is a vivid remind that not only has nothing been fixed in the country that single-handedly pulled the world out of depression during the GFC, but that things are going from bad to much worse.

1.  China on brink of biggest Covid-19 crisis since Wuhan as cases surge

China is scrambling to address its most severe Covid-19 outbreak in two years, reporting soaring cases in a fresh wave that has seen the country tweak its zero-Covid policy by allowing rapid antigen tests for public use. After topping 1,000 for two days in a row, new locally transmitted cases surged to more than 3,100, this time driven by a spike in symptomatic infections, the National Health Commission reported on Sunday. It came as 16 provinces reported new coronavirus infections, as did the four megacities of Beijing, Tianjin, Shanghai and Chongqing.

As a result of the latest covid breakout, China’s government has shut down the city of Shenzhen, a city of 17.5 million people known as China’s Silicon Valley, and is restricting access to Shanghai by suspending bus services. All businesses except those that supply food, fuel and other necessities were ordered to close or work from home. That includes Foxconn, Apple’s Chinese slaves:

And since the port of Shenzhen – one of the world’s busiest container post is now also locked down, expect a fresh round of cascading chaos in Transpacific supply chains, just in time to join the snarled Transatlantic supply chains as the Ukraine war cripples all global seaborne traffic.

The Hang Seng tech index has plunged 61% from its peak last year. The Nasdaq Golden Dragon China Index of U.S.-traded stocks has fared even worse, down 68%, and with another bad day or two, the peak-to-trough decline could surpass its 72% crash in the 2008 global financial crisis. Meanwhile, in the US, Chinese ADRs collapsed 10% in a single day on Friday, the worst selloff since 2008, after the SEC listed 5 Chinese companies at risk of delisting should they refuse to show their books to American auditors, stoking panic every ADR will eventually be booted out. “The market is very panicky,” Paul Pang at Pegasus Fund Managers Ltd., who has sold almost all his stake in Alibaba Group, told Bloomberg. “Sanctions against China are not impossible, if China refuses to take sides on the war in Ukraine. Tech shares are among those risky names exposed in the crossfires in the rising Sino-U.S. tensions.”

Fear of a fresh regulatory crackdown by Beijing has escalated lately as policy makers proposed more curbs on online games. Earnings results so far have been unable to ease any worry about the growth outlook amid weakening consumer demand in China. The Hang Seng Tech Index is the one of the world’s worst-performing tech gauges since the war in Ukraine broke out and has dropped 17% in March, on course for its biggest monthly drop ever. 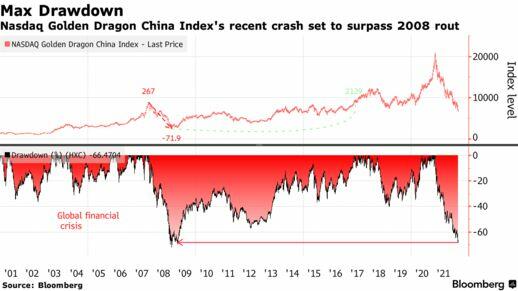 “We can’t see any rebound signals at the present,” said Yan Kaiwen, analyst at China Fortune Securities. The market is concerned about inflation because of the higher prices for oil and other commodities, which will have a negative impact on the global economy, he said.

While nothing new to those who have been following the collapse in the Chinese junk bond market – closely linked to China’s property sector – China credit stress reached new extremes in the offshore, USD market, where average junk yields rose above 25% meaning the primary market won’t function properly anytime soon. Contagion has transformed stronger property developers into risky bets. Luxury property developer Shimao Group, which was once considered a bellwether for China’s safer builders, has been slashed deep into junk from investment grade in a matter of months. The firm has been cut to triple C territory by Moody’s Investors Service and Fitch Ratings. Logan Group has also been downgraded on undisclosed debt and governance worries. Cracks are also showing up in China’s government bond market. Yields on the 10-year sovereign note rose to 2.86%, the highest this year, as investors pointed to capital outflows. 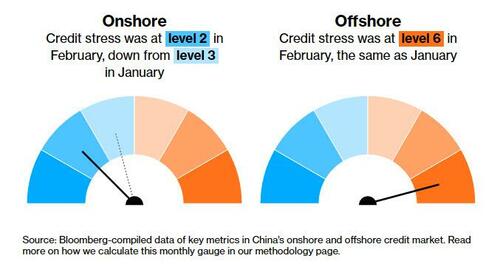 China’s property industry has been rocked by at least 14 defaults by developers since authorities began cracking down on excessive borrowing and speculation in the housing market in 2020 which led to a historic default by China Evergrande. While policy makers are now signaling greater tolerance for selective relief by encouraging home buying in lower-tier cities, cutting mortgage rates and allowing more bank loans for developers, there are few signs this is helping boost sales. Unfortunately, these new measures have yet to bear fruit, as China’s biggest developers are seeing home sales crater this year amid a market that is effectively frozen. 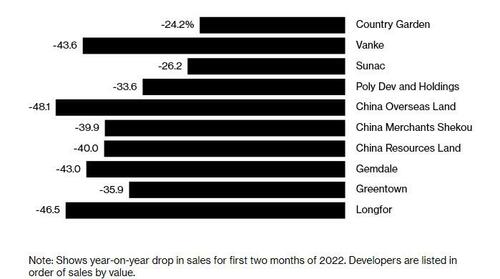 Home sales tumbled during the first two months of this year. China Vanke, the nation’s second-biggest developer by sales, saw a decline of 44%. At Country Garden Holdings Co., whose dollar bonds are at close to record lows, sales fell 24%. Even state-run China Overseas Land & Investment Ltd. saw them slump 48%.

While more adjustments are expected after the National People’s Congress taking place through this week, there are concerns of an “unstoppable downward spiral” according to Nomura International HK analysts. “We become increasingly worried whether the policy changes will be effective and timely enough to prevent property sales from a further correction” in the first half of this year, analysts Jizhou Dong and Stella Guo wrote in a note late February.

February credit data was weaker thank expected after mortgage lending fell for the first time in 15 years. After a record January, China’s credit expansion slowed in February as a long holiday and the slumping housing market meant people and companies borrowed less. Banks lent 1.2 trillion yuan ($194 billion) in the month, down from 4 trillion yuan in January and less than in February last year. A key indicator of home mortgages declined for the first time in at least 15 years despite efforts by the central bank and other financial institutions to boost borrowing by cutting rates and lowering down payments.

Seems the world should follow this big lie, too. And soon the WHO garbage hole is even supposed to take over: https://www.bitchute.com/video/yWUWjkUwMYhu/

This shit has to stop immediately.

More agitation by the chosen.