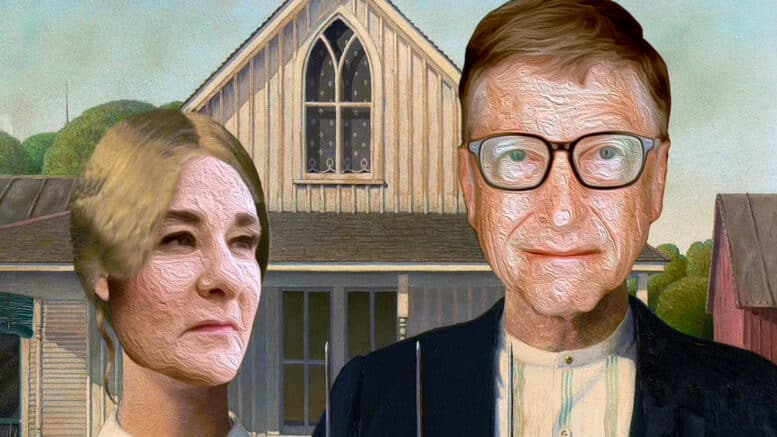 Please Share This Story!
PDF 📄
Bill Gates is a poster-child for Technocracy. He clearly has his eye on monopoly-power over humanity’s health with mass vaccines, but is he also trying to gain monopoly control over food? This is a must-read article by Robert F. Kennedy, Jr., that digs deep into Gates’ global activities. ⁃ TN Editor

Bill Gates has quietly made himself the largest owner of farmland in the United States. For a man obsessed with monopoly control, the opportunity to also dominate food production must seem irresistible.

“Gates has a Napoleonic concept of himself, an appetite that derives from power and unalloyed success, with no leavening hard experience, no reverses.” — Judge Thomas Penfield Jackson, presiding judge in the Gates/Microsoft antitrust-fraud case

The global lockdowns that Bill Gates helped orchestrate and cheerlead have bankrupted more than 100,000 businesses in the U.S. alone and plunged a billion people into poverty and deadly food insecurity that, among other devastating harms, kill 10,000 African children monthly — while increasing Gates’ wealth by $20 billion. His $133 billion fortune makes him the world’s fourth wealthiest man.

For a man obsessed with monopoly control, the opportunity to also dominate food production must seem irresistible.

According to the newest issue of The Land Report, Gates has quietly made himself the largest owner of farmland in the United States. Gates’ portfolio now comprises about 242,000 acres of American farmland and nearly 27,000 acres of other land across Louisiana, Arkansas, Nebraska, Arizona, Florida, Washington and 18 other states.

Thomas Jefferson believed that the success of America’s exemplary struggle to supplant the yoke of European feudalism with a noble experiment in self-governance depended on the perpetual control of the nation’s land base by tens of thousands of independent farmers, each with a stake in our democracy.

So at best, Gates’ campaign to scarf up America’s agricultural real estate is a signal that feudalism may again be in vogue. At worst, his buying spree is a harbinger of something far more alarming — the control of global food supplies by a power-hungry megalomaniac with a Napoleon complex.

Let’s explore the context of Gates’ stealth purchases as part of his long-term strategy of mastery over agriculture and food production globally.

As usual, Gates coordinates these personal investments with taxpayer-subsidized grants from the Bill & Melinda Gates Foundation, the richest and most powerful organization in all of international aid, his financial partnerships with Big Ag, Big Chemical, and Big Food, and his control of international agencies — including some of his own creation — with awesome power to create captive markets for his products.

Former Secretary of State Henry Kissinger, a protégé and partner to David Rockefeller, observed that, “Who controls the food supply controls the people.” In 2006, the Bill & Melinda Gates and Rockefeller Foundations launched the $424 million Alliance for a Green Revolution in Africa (AGRA) promising to double crop productivity and boost incomes for 30 million small farmers by 2020 while cutting food insecurity in half.

Characteristically, Gates’ approach to global problems put technology and his chemical, pharmaceutical and oil industry partners at the center of every solution. As it turned out, Gates’ “innovative strategy” for food production was to force America’s failed system of GMO, chemical and fossil fuel-based agriculture on poor African farmers.

African agricultural practices have evolved from the land over 10,000 years in forms that promote crop diversity, decentralization, sustainability, private property, self-organization and local control of seeds. The personal freedom inherent in these localized systems leaves farm families making their own decisions: the masters on their lands, the sovereigns of their destinies. Continuous innovation by millions of small farmers maximized sustainable yields and biodiversity.

Gates built the supply chain infrastructure for chemicals and seeds and pressured African governments to spend huge sums on subsidies and to use draconian penalties and authoritarian control to force farmers to buy his expensive inputs and comply with his diktats. Gates made farmers replace traditional nutritious subsistence crops like sorghum, millet, sweet potato and cassava with high-yield industrial cash crops, like soy and corn, which benefit elite commodity traders but leave poor Africans with little to eat. Both nutrition and productivity plummeted. Soils grew more acidic with every application of petrochemical fertilizers.

As with Gates’ African vaccine enterprise, there was neither internal evaluation nor public accountability. The 2020 study “False Promises: The Alliance for a Green Revolution in Africa (AGRA)” is the report card on the Gates’ cartel’s 14-year effort. The investigation concludes that the number of Africans suffering extreme hunger has increased by 30 percent in the 18 countries that Gates targeted. Rural poverty has metastasized dramatically, and the number of hungry people in these nations has risen to 131 million.

Under Gates’ plantation system, Africa’s rural populations have become slaves on their own land to a tyrannical serfdom of high-tech inputs, mechanization, rigid schedules, burdensome conditionalities, credits and subsidies that are the defining features of Bill Gates’ “Green Revolution.”

The only entities benefiting from Gates’ program are his international corporate partners — and particularly Monsanto, in which the Gates Foundation Trust purchased 500,000 shares worth $23 million in 2010 (but later divested those shares after pressure from civil society groups). Gates himself even filmed commercials for Monsanto’s GMOs, touting them as the “solution” to world hunger.

In a typical example of Gates’ strange largess, his foundation apparently made his taxpayer-subsidized “charitable” grants amounting to $10 million to the Big Ag behemoth, Cargill, to build his supply chains for GMO soy in South Africa. Africans call Gates’ program “Neocolonialism” or “Corporate Colonialism.”

The AGRA Watch initiative of Seattle-based Community Alliance for Global Justice follows Gates’ agricultural and food policies. According to Heather Day, an AGRA Watch spokesperson, AGRA is a trojan horse for corporate kleptocracy.

“The Gates Foundation and AGRA claim to be ‘pro-farmer,’ ‘pro-poor’ and ‘pro-environment,’” Day told me. “But their approach is closely aligned with transnational corporations, like Monsanto, and foreign policy actors like USAID [United States Agency for International Development].They take advantage of food and global climate crises to promote high-tech, centralized, industrial agriculture that generate profits for Gates’ corporate partners while degrading the environment and disempowering farmers. Their programs are a dark form of philanthrocapitalism based on biopiracy and corporate biopiracy.”

Two months into the planned covid scamdemic it was clear that Gates and his predator buddies were pursuing every possible avenue of control over humanity. After long decades of gaining control over the monetary system they began on the medical system via the plandemic. The next rung is controlling the food system. An historical quote most likely to support predator success? “Give them bread and games (circuses) and they will never revolt.” — Roman poet, Juvenal  In the matter of Gates’ and his buddies’ power-mongering push exactly what has changed in 2000 years? NOTHING. Gates did exactly as Juvenal said.… Read more »

I really hope United States of America Republic finally gets a justive system with honest Judges so this Eugenics Satanic Gates can be tried for Crimes against Humanity and all the deaths he has gleefully casused with his projects ov vaccinations globally, and that ALL and every asset ,holdings accounts he has accumilated in his lifetime of cheating stealing and lying are confiscated.
These inhumans have NO place on this planet..

There’s a rainbow after the storm…..these unprecedented times, believe it or not, are awakening humanity to understanding that we are all powerful beings of Light. Let’s all make an effort to raise our vibration from the go to a higher state of consciousness where all false empires will come tumbling down.

What is so infuriating is that history records time and time again how food (or lack thereof) has been used to control populations. Both Stalin and Mao were responsible for the death by starvation of multiple millions of human beings through the restriction of grain, yet most people seem unaware that this could so easily happen again. Covid is the pretext for killing independent small to medium sized businesses, placing total control in the hands of the multi-national corporations. They work hand in hand with governments (a most fascistic arrangement) as proxies for governmental diktats. Gates will control the actual… Read more »

I guess Bill Gates and his type will stop destroying human lives and human health when they stop breathing. Not a nice thing to say but true. Sadly these sub-humans are dedicated and relentless in their efforts of causing poverty and disease to everyone else who are not part of their globalists’ cabal.

An empty and internally powerless man stooping to such low levels to make himself feel powerful! Faith and knowing that we are a Spark of Divinity of God’s Consciousness can lift us from the depths of despair. We all know of the fall of empty empires…the fall of Bill Gate’s Empire is just around the corner!

How we got here in our worldwide dictatorship is by the same New Age/Atheistic philosophy as yourself which came from the serpent. People like Gates and like you believe you are divine. Little gods and christs whom a demon whispered in your ear, a snake that curls up the spine to enlighten your mind telling you how divine you will be and are. I’m not being unkind here when I tell you the truth, Rita you are wholly deceived. “I am the LORD, and there is none else, there is no God beside Me: I girded thee, though thou hast… Read more »

More on Bill Gates here. I hope your readers will find this useful :: Freedom Of Speech Is Dead, Long Live Medical Tyranny

[…] Bill Gates is the largest owner of farmland in the United […]