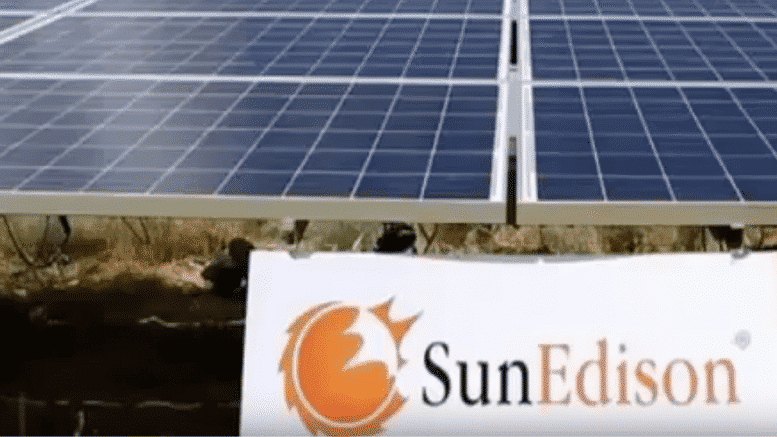 TN Note: The alternative energy industry is reeling because this bankruptcy will likely cut off their only source of funding for future expansion. After all, what venture capital firm is going to put money into a similar operation? Who is going to loan them money? Excuses will abound now, trying to explain why SunEdison really failed, but not from a bad economic model. Maybe it was management. Maybe they tried to grow too quickly. Maybe it was some bad business partners. You can promote the real reason however: The profit just isn’t there!

This story is developing. Please check back for further updates.
In its bankruptcy filing, the company said it had assets of $20.7 billion and liabilities of $16.1 billion as of Sept. 30.

The company said its two publicly traded subsidiaries, TerraForm Power and TerraForm Global, were not part of the bankruptcy.

The company said it secured up to $300 million in new financing from its first-lien and second-lien lenders, which is subject to court approval. The money will be used to support SunEdison’s operations during its bankruptcy, such as paying wages and vendors, and proceeding with ongoing projects.

“Our decision to initiate a court-supervised restructuring was a difficult but important step to address our immediate liquidity issues,” said Ahmad Chatila, SunEdison chief executive officer.

He said the company planned to use Chapter 11 to reduce debt, shed non-core operations and take steps to get the most value out of its technology and intellectual property.

Although solar project developers continue to benefit from robust demand, their shares have been hit by investor concerns that demand could fall in tandem with weak oil prices.

Shares of SunEdison were halted, and last traded at about 34 cents on the New York Stock Exchange. The company’s stock traded as high as $33.44 in July 2015. Shares of First Solar were up slightly and shares of SolarCity were last up more than 5 percent. An index of solar shares gained 1 percent.

Shareholders generally lose their investment in a bankruptcy.