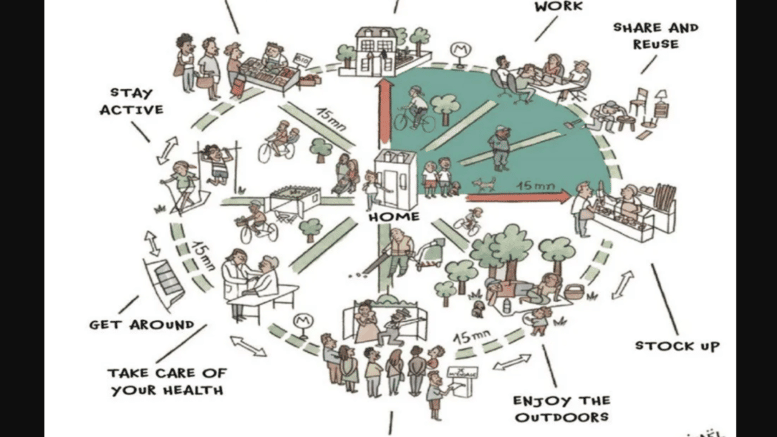 Please Share This Story!
PDF 📄
A 15-minute city means everything you have to (or can do) exists within 15 minutes from where you live. People are seeing it as a virtual gulag where confinement is monitored with geo-fencing, smart phones and panopticon-style surveillance. Also perceived is the inability (or great difficulty) to escape from your assigned 15-minute neighborhood. Globalists and Technocrats are thrilled at the prospect. ⁃ TN Editor

Fifteen-minute cities are popping up everywhere, and the World Economic Forum is wildly enthusiastic about them. Last year it was announced that Paris, France, would become a 15-minute city, and now the British city of Oxford is next. However, outraged Brits are fighting back. As reported previously at RAIR Foundation USA, the city council has announced that it will divide Oxford into 15-minute neighborhoods or small 15-minute towns billed as “greener, cleaner and safer.” To further seize control of people’s lives, globalists are pushing the false idea that these “green” cities – which make services accessible to residents within 15 minutes of their homes – will “save the planet” and help all humanity.

Instead, they are nothing more than a way for them to restrict, coerce, fine, punish, surveil, and limit the fundamental right of freedom of movement for residents. For example, residents are not allowed to leave your 15-minute city by car more than the allotted times a year. Otherwise, you will be fined. In addition, the government will track and control your every movement through your smartphones & facial recognition technology.

The “15-minute city” concept is crucial in the United Nations Agenda 2030 and their Net Zero green agenda. The World Economic Forum is also pushing this new concept. Oxford, which has declared a ‘climate emergency,’ is hoping their 15-minute cities will help achieve the Council’s ‘Net Zero carbon Oxford’ vision by 2040.”

Oxford will be divided into six zones ‘to save the planet’ from “global warming.” Electronic fences are placed on access roads to ensure residents remain within their own zone.

Residents are allowed to leave their 15-minute city a maximum of 100 times a year, but then they must first register their car, which is tracked throughout the city via smart cameras.

While the initial allotment of escape tickets may seem reasonable to some, once the public accepts that the state has the right to confine you, it is guaranteed that they will add additional restrictions and fewer permits to leave your zone. This was established very clearly and quickly in many Western nations in the past few years under the rubric of Covid restrictions.

Oxford residents are furious over council plans to turn the city into ’15-minute’ controlled zones. They have been brushed away by the Council, which has ignored their displeasure.

Very interesting parallel with gulags. In fact, a friend of mine was born in Siberia. His mother was born in a free land thousands of miles away, but come the communists, her grandfather was outspoken against them, and the deported her and all of her siblings, three of whom were female and none of whom were over 17. SHE was 13. She is still alive today, in Ukraine. My friend tells me that he was born in Norilsk (don’t trust me…look it up…it’s very hard to locate without a search but can be done) where she was “working” in a… Read more »

As a Brit familiar with towns and cities throughout the UK it’s clear to me that even on its own terms the idea of a ’15 minute city’ would be grossly unfair (all other problems notwithstanding). No town or city is consistent in its makeup, socio-economic profile or its amenities,which tend to be concentrated in one relatively small area. Dividing Oxford into 7 zones would mean that some people would live in the commercial zone – and have less need to use up their ‘100 journey limit’, others would live in relatively deprived areas, and car-wise would be confined there,… Read more »

Thanks for the info Greg. I always desire a firsthand comment/experience about events that are geographically removed from the US. Censorship here is rampant.

I think the idea is to develop those 15 min. zones so they have all the necessities for the people. It’s not supposed to be completed until 2040.

I know much about England’s government. Can the people vote the council out? If it’s anything like America, most of the voters are asleep and the “voting out” rarely works. I was just curious.

Translation: 15-Minute City = GULAGS of SLAVERY and TOTALITIAN CONTROL, as Mr. Thyme notes so well in his comment.

AND it’s all tied up with a nice little UN/WEF red-flag bow in their sales talk of “community, save the planet, togetherness, happiness, fairness, equality, protection and other lies” for the Woketard population who will never, ever SEE in this life. (The Woketards will require several more turns around the wheel to SEE.)