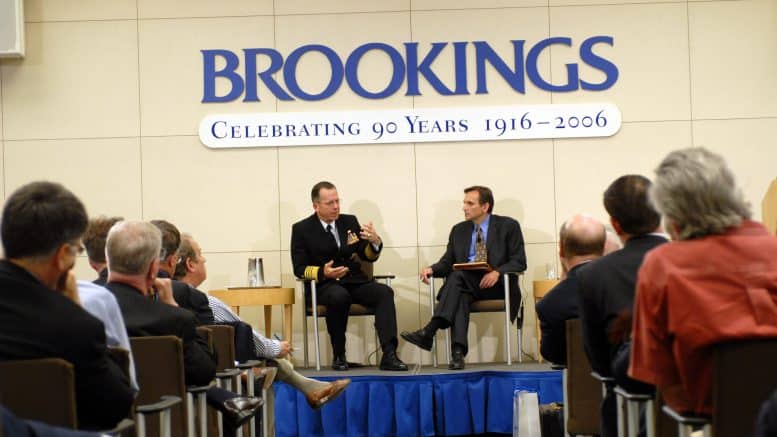 The Brookings Institution is an elitist, Trilateral Commission connected think tank in Washington. When they write on Technopopulism, you can bet that it has arrived and had better be considered, because Italy is now a model of what is happening in the U.S. ⁃ TN Editor

Finally, three months after its elections, Italy has produced a new creature in the political biosphere: a “populist but technocratic” government. What we will be watching is not really the result of a Frankenstein experiment, rather something closer to a genetically modified organism. Such a pairing is probably something unheard of in history: Into a populist coalition was inserted some technocratic elements in the most critical ministries. The rationale might be less abstruse than it seems: You can make the nationalist at home, but only if you keep your populist fingers away from interdependent policies

The two anti-establishment parties that form the coalition, the Five Star Movement (FSM) and the League, will grant a parliamentary majority, though not a large one, to the new government. They will also pretend, through their rhetoric, that their government will be close to the ordinary people. This slogan may resound and even create a sense of community in a disoriented electorate, growing disenchanted with democracy.

However, during the final negotiations, the president of the Republic, Sergio Mattarella, managed to insert a number of external and technically competent figures in the list of ministers. The all-important Finance Ministry will be led by an economist, Giovanni Tria, who has no known familiarity with either FSM and League, although he had some proximity with past center-right governments. The foreign minister, Enzo Moavero, was a member of the non-partisan and pro-European Monti Cabinet, between 2011 and 2013. Other ministers have no political affiliation. Even Prime Minister Giuseppe Conte, a relatively unknown professor of private law, has no previous political or administrative experience.

Genetically modifying the coalition led by Luigi di Maio, head of the FSM, and Matteo Salvini, head of the League, was crucial, given how unusually inexperienced the two leaders are (they now both serve as ministers and vice-premiers). Di Maio, for instance, was barely 20 years old in 2007 when the global financial crisis erupted. He dropped out of his studies and never had a job before entering the FSM. So his first job will be as labor minister.

The two populist leaders will have to learn fast. In recent weeks, leaked coalition plans—indicating that Italy could abandon the European monetary union—provoked a strong bout of financial instability. Yields on Italy’s sovereign bonds immediately escalated to dangerous levels. Di Maio and Salvini appeared shocked, and probably for the first time became aware that the margin of error is very slim for a highly indebted country.

However, the real reason a GMO government became urgent was probably the need to avoid a new election. A new vote could have turned into a referendum on the rules of the euro and ultimately on Italy’s permanence in the monetary union. Political deadlines of this kind lure financial investors into “asymmetric bets” where selling sovereign bonds, rather than buying them, brings higher rewards and little risk. In a matter of weeks or even days, Italy would have lost access to markets. A European country that cannot fund its debt could still request financial assistance by the European institutions. However, the government needs to underwrite a memorandum of understanding and get it approved by parliament. A purely technocratic government would have not been able to ensure the parliament’s approval. An unintended inertial exit from the euro could have ensued.

According to the polls, although nationalist feelings are on the rise, 70 percent of Italians favor the euro, rather than returning to their own currency. Abandoning the euro would also change Italy’s position as a European country and a founding member of the European community. Such a dramatic change, envisaged in the original plans of the FSM-League coalition, could even violate the letter of the Italian constitution. The “Carta” states Italy’s adhesion to the international treaties, thus binding the country to the European and Atlantic communities. Leveraging the constitution, the president of the republic was able to win the first confrontation with the populist parties, vetoing the nomination of a fiercely Eurosceptic economist, Paolo Savona, as finance minister, but will the nomination of more technocratic ministers be enough?