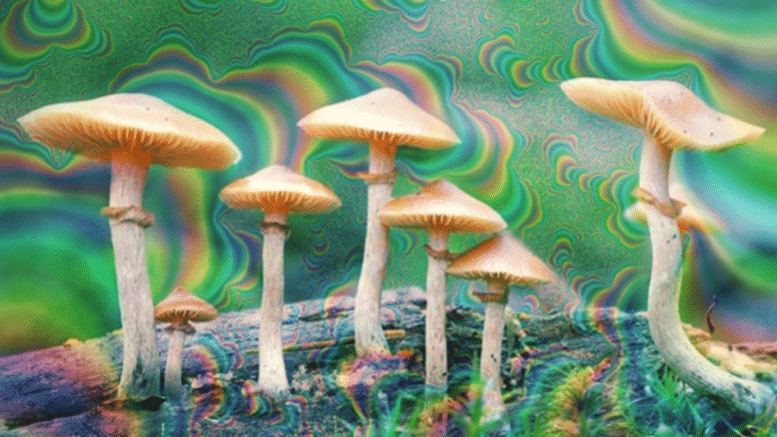 Please Share This Story!
PDF 📄
In 2022, Davos elites will have an opportunity to celebrate “oneness” and “connectedness” with magic mushrooms, administered in part by psychedelic shamans of Burning Man. What could go wrong with global leaders tripping out while deciding the future of the whole world? ⁃ TN Editor

Welcome to the Dose. Sure, Davos has always sought to raise global consciousness — addressing topics like food scarcity and climate change. But psychedelic drugs? These substances are still illegal in most places. Finding out that influential shamans and companies will present at this year’s World Economic Forum inspired me to take a look at what the industry has to gain from a platform with the global elite.

The World Economic Forum, a gathering of the global elite now synonymous with the quaint Swiss town of Davos where it’s held, isn’t the usual place you’d expect to find a shaman, do breathwork or get rooted in your body.

But this year’s gathering of government leaders and corporate executives will host a “House of Psychedelics” program with almost 40 sessions and speakers, including researchers, entrepreneurs, investors — and some who consider themselves shamans. While not part of the core Davos agenda, which doesn’t permit commercial activity, the program has a space on the town’s main promenade, which traditionally showcases Fortune 500 companies to the conference’s attendees.

The program, a first for Davos, shows how far the psychedelics industry has come, organizers said.

“It’s a really big shift for world leaders to inquire about how they might be able to use psychedelics,” said Marik Hazan, chief executive officer of Energia Holdings Inc., the New York-based business hosting the event. Energia is a holding company for Tabula Rasa Ventures, an incubator for psychedelic companies, and Hazan is a managing partner at Tabula Rasa. The program aims to spark conversations about rolling out psychedelics responsibly for medical use and encourage countries and companies to include such treatments in health coverage.

The industry is arriving at Davos amid a renaissance of popular interest in the drugs. Most are still considered illegal, although a number of cities and states have decriminalized some. Stock values for companies have lagged while they await results from long-range clinical trials to test the efficacy and risks of substances such as MDMA, LSD, psilocybin, ayahuasca and 5-MeO-DMT. The AdvisorShares Psychedelics ETF has lost over 50% of its value this year.

Other topics on tap include ethical debates, such as how to guard against abusive practices in an industry where people are incredibly vulnerable while under the influence of drugs. “What about a Coke bottle in a clinic?” Hazan asked. He said the idea of “putting products in front of people undergoing an experience” needs to be discussed.

But at Davos, business is never out of focus. Other sponsors of the event include Maya Health, a data platform, and Irwin Naturals, a vitamin and supplement company. Some of the larger organizations attending include Compass Pathways, Field Trip Health and the Multidisciplinary Association for Psychedelic Studies, or MAPS.

Two shamans who plan to attend also don’t shy away from business topics, saying they are deeply entwined in what they do.

Florencia Bollini specializes in 5-Me0-DMT, known as the “God molecule” for the short but intense experiences it invokes. She’s also the founder of two fledgling companies in the psychedelics space. Los Angeles-based Nana is based on a digital platform that will distill Bollini’s decade of experience serving psychedelic substances in the underground. The other, Brighton, England-based Rewire, is seeking $5 million in seed funding that Bollini said will develop a method for 5-MeO-DMT that will improve its efficacy and decrease the risk of negative experiences. Clinical trials are planned for next year.

She expects the Davos experience to be different from her annual pilgrimages to Burning Man, the famous Nevada festival, where she showcases her feminine approach to psychedelic medicine. “It’s important to educate politicians about what heals,” Bollini told me of her mission. “This is a big moment for psychedelics. After working so long now, we are ready to reveal a solution that we know works, because we’ve seen it in the underground over and over again.”

You gotta try LSD once in your life…………splendid example for their children and young people. Most of them are probably already on cocaine, so what :-O.

They want you to be out of your rational mind all the time. They want you disabled, agog in the meta-verse, doped and neutralized. Much easier to control people who are delirious.

Not impressed at all. Simply means they are trying to determine how they can turn a profit from micro-dosing. Too late. Silicon Valley has already proofed that. So what?

AND I’m sick of hearing the term “global elite” from journalists. What, exactly, is elite about these people? Wealth? A penchant for murder? Entitlement? Thievery? Well…

STOP IT!!! These sick humans are not elite by any stretch of the imagination. They are elitists. There is a BIG difference.

Psychedelics just might – possibly – enlighten them. I doubt very much that they could make them any worse then they already are?!

You know psychedelics are quite unreliable in the quality control area. Strychnine can easily make its way into those hallucinogenic vials. I certainly hope these elitist pigs don’t get a bad batch. Huh? (Anyone got a bad batch? Anyone?)

All that you described in this article, regarding what ‘connectedness’, ‘oneness’ and everything else is new age paganism; to me is not a surprise knowing such facts, as I know the world conspiracy is about to create a One World religion – lucifer worship.

[…] Merkel, Justin Trudeau, and even Vladimir Putin (just to name a few) are graduates of. 0 48 Burning Man? Klaus Schwab Opens Doors In Davos To Psychedelic Shamans technocracy.news by Tiffany Kary Via Bloomberg – 3 days ago In 2022, Davos elites will have […]

[…] Quite Frankly tonight, an excellent broadcast of news, guests, and call-ins from us common folk, a story from Technocracy News led to me looking into the work of Maya Health who was mentioned in the article. The reason started […]