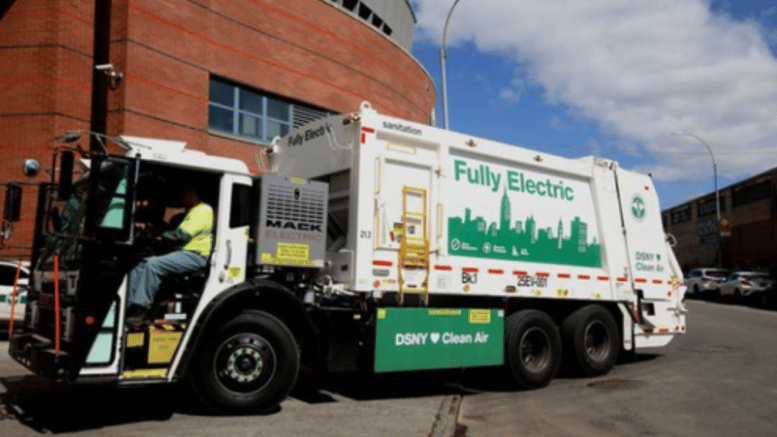 Please Share This Story!
PDF 📄
Batteries failed across the nation during the worst storm/cold snap in modern history. NYC’s garbage trucks were expected to deliver 12 hours of snow plowing but conked out after 4 hours. EV car owners reported they had trouble getting home because they had to stop so often to recharge their prematurely depleted batteries. ⁃ TN Editor

In a move that absolutely nobody could have seen coming, New York City is scrapping its brilliant idea for electric garbage trucks after finding out the truck simply “aren’t powerful enough to plow snow”.

The pipe dream of converting the city’s 6,000 garbage trucks from gas to electric in order to try and limit carbon emissions (because there’s no other problems that need to be dealt with in New York City right now) is “clashing with the limits of electric-powered vehicles,” Gothamist wrote this week.

The city’s current trucks run on diesel and can be fitted with plows in the winter.

Despite the shortcomings, the city Department of Sanitation’ has already ordered seven electric rear loader garbage trucks, custom-made by Mack, the report says. Those trucks cost an astonishing $523,000 each and are to be delivered this spring.

Sanitation Commissioner Jessica Tisch told the NYC city council earlier this month: “We found that they could not plow the snow effectively – they basically conked out after four hours. We need them to go 12 hours. Given the current state of the technology, I don’t see today a path forward to fully electrifying the rear loader portion of the fleet by 2040.”

“We can’t really make significant progress in converting our rear loader fleet until the snow challenges are addressed,” she continued.

Many other cities don’t use their garbage trucks to plow snow, the report notes. Places that get a lot of snow, like Denver, have their own committed light duty trucks outfitted with plows, which operate more efficiently.

New York City, however, has committed to plowing each street and doing so by putting the city’s 2,100 trucks to work to clear the “equivalent of 19,000 miles of street lanes”.

In addition to…well, not being able to get the job done, charging has also been a holdup with electric trucks, Tisch said: “..this charging infrastructure requires additional space and often new electrical utility connections that can require substantial capital investments.”

Harry Nespoli, the president of Teamsters Local 831 union representing sanitation workers also isn’t sold on the idea: “How much power do they have? Can they run 12-hour shifts without a charge? I don’t know.”

Sanitation spokesperson Vincent Gragnani concluded: “​​With current technology, full electrification isn’t possible now for some parts of our fleet, but we are monitoring closely and really hope it will be.”

Let us know how that turns out, Vinny.

Seriously folks, who didn’t see this coming.
Here in Ontario, Canada, the Provincial government is giving taxpayer dollars. in the tune of billions, to the big vehicle manufacturing giants to “retool” their plants to produce electric vehicles that NO ONE WANTS. Take good care of your gas vehicles, as they’ll be worth their weight in gold.

Actually, gas-powered will be confiscated and deprecated. In my neck of the woods, which is Eastern Europe, they have new laws coming into effect all of the time to make passing inspection more difficult. Whereas in the states you can have a somewhat rusty vehicle, here, it is getting close to forbidden completely. Any vehicles with gas tanks older than 20 years will be required to change them out. My car is 33 years old, the tank is in perfect condition, as I have personally taken it down and inspected it thoroughly within the past couple years. Well, now, I… Read more »

Typical, typical, typical. The NYC politicos are at it again. Such stupidity goes way beyond ‘mistakes were made’ into the realm of worship for the UN/WHO/WEF’s totalitarian vision. It’s patently obvious these people have been promised great benefits if their murderous masters get their way. I mean, really? The facts are too basic. I’m beginning to believe that the constant stupid actions taken by NYC politicos/bureaucrats are meant to drain the city’s coffers in order to promote a faster economic collapse statewide. Reason–NYC continues one DUH! moment after another. Electric vehicles require electricity be generated from somewhere, DUH! Huge trucks… Read more »

The purpose of the constant absurd actions are manifold; they destroy faith in the system (WEF agenda), destroy faith in the politicians (WEF), and create the illusion of incompetence. Incompetence is necessary because it protects them against the people consciously understanding that all of what “they” do is meant to hobble the people. Look, no NYC politician is affected by the snow not being plowed on Avenue B for instance. Very few, if any of the higher up politicians live in the city. And lets be real clear here, EVERYONE and their long lost third cousin KNEW that E waste… Read more »

AWED NEWSLETTER: We cover COVID to Climate, as well as Energy to Elections. - Dr. Rich Swier