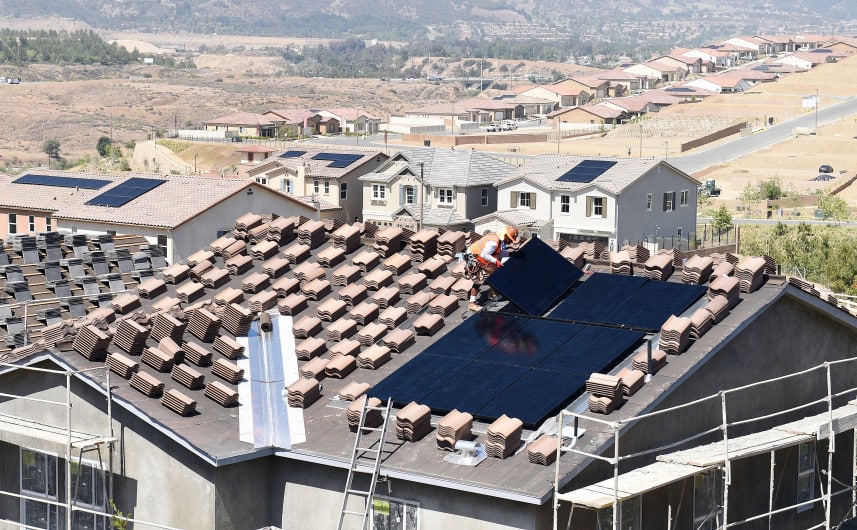 Radical environmentalists are asserting themselves again in California as they seek to mandate solar panels for all new homes, which could cost up to $30,000 more per unit. The Technocrat mindset is that there is a scientific solution to every conceivable problem, but personal freedom of choice does not enter their mind. ⁃ TN Editor

For seven years, a handful of homebuilders offered solar as an optional item to buyers willing to pay extra to go green.

Now, California is on the verge of making solar standard on virtually every new home built in the Golden State.

The California Energy Commission is scheduled to vote Wednesday, May 9, on new energy standards mandating most new homes have solar panels starting in 2020.

If approved as expected, solar installations on new homes will skyrocket.

Just 15 percent to 20 percent of new single-family homes built include solar, according to Bob Raymer, technical director for the California Building Industry Association.

“California is about to take a quantum leap in energy standards,” Raymer said. “No other state in the nation mandates solar, and we are about to take that leap.”

The proposed new rules would deviate slightly from another much-heralded objective: Requiring all new homes be “net-zero,” meaning they would produce enough solar power to offset all electricity and natural gas consumed over the course of a year.

“Zero net energy isn’t enough,” said Andrew McAllister, one of five state energy commissioners voting on the new homebuilding standards. “If we pursue (zero net energy) as a comprehensive policy, we’d be making investments that would be somewhat out of touch with our long-term goals.”

While environmentalists and homebuilders praised the new standards, the proposed rules have some detractors who still support net-zero goals.

In addition to widespread adoption of solar power, the new provisions include a push to increase battery storage and increase reliance on electricity over natural gas. Among the highlights:

The mandate dates back to 2007 when the state energy commission adopted the goal of making homebuilding so efficient “newly constructed buildings can be net zero energy by 2020 for residences and by 2030 for commercial buildings.”