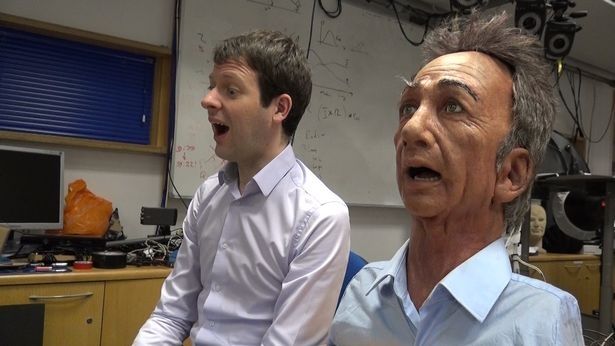 Technocrat scientists intent on perfecting humanoid-style robots are now integrating emotional response and reaction into artificial intelligence. This may seem insignificant, but consider that humans are deceived by emotions more than by intellect.  ⁃ TN Editor

Top scientists at Cambridge University have been working with Charles to find out if machines can respond to social cues as part of a ground-breaking project.

A world dominated by Artificial Intelligence may be closer than we think after brain-box scientists created a ‘mind reading’ robot that can mimic human emotions.

Happy, sad, confused or bored – researchers at Cambridge University have built Charles to mimic all human expressions as part of a ground-breaking project.

The scientists hoped to discover if the machines could respond to the same social cues as humans and encourage people to engage with the machines more, Cambridge News reports.

Charles is made up of a system of computer programmes linked up to a camera – which can read people’s faces.

The computer reads the positions of the face, including the eyebrows, jaw and mouth, then sends the information over to Charles who mimics the expression in just two to three seconds.

Professor Peter Robinson from the Department of Computer Science and Technology, said: “We’ve been interested in seeing if we can give computers the ability to understand social signals, to understand facial expressions, tone of voice, body posture and gesture.

“We thought it would also be interesting to see if the computer system, the machine, could actually exhibit those same characteristics , and see if people engage with it more because it is showing the sort of responses in it’s facial expressions that a person would show. So we had Charles made.”

However Charles hasn’t quite perfected the art of human emotion just yet, as his control programmes are “not quite fine enough” to look completely authentic, according to Prof Robinson.