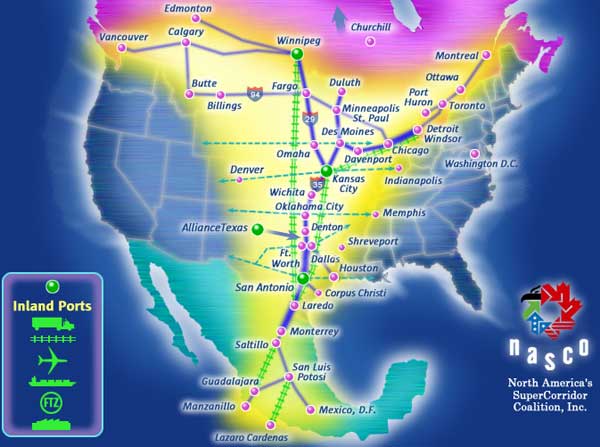 Renewed Calls For North American Union Based On Technocracy

Dr. Parag Khana, author of Technocracy in America, calls for Trump to scrap NAFTA and go directly to a North American Union. Under President George Bush, the NAU idea was driven into oblivion by American activists, including this writer. It was and still is a notion of Technocracy that Mexico and Canada should merge with the US to become a continental technate, ruled by Technocrats. ⁃ TN Editor

On Thursday, April 14, 2018, Parag Khanna was the opening speaker at the most recent SIOR Spring World Conference on “Megatrends and the Map of the Future.” Ubiquitous technology and urbanization are the two irrefutable mega-trends of the 21st century. Together they are remapping the world towards a hyper-connected matrix of densely populated city clusters and ultra-modern special economic zones (SEZs) that represent the new foundations of a global network economy and society. Elaborating on bold forecasts from his pioneering book Hybrid Reality: Thriving in the Emerging Human-Technology Civilization, Dr. Khanna provided unmatched clarity into the future. Dr. Khanna is the world’s leading geo-strategist and the next generation voice on the future of global affairs. He is currently a senior fellow at the Lee Kuan Yew School in Singapore and director of Hybrid Realty, a global advisory firm. His latest books include Technocracy in America: Rise of the Info-State and Connectography: Mapping the Future of Global Civilization.

Parag started the program mentioning that he traveled to the Middle East and realized that Middle East country borders do not matter. Countries are political states and do not represent reality. He stated that connectivity is the single most important word to internationally affairs. Under the radar, we keep building more infrastructure but no one has maps of how we are connected by telecommunications. Instead we have maps on walls based on political states and that is not useful. Dr. Khanna had three maps: 1) Skeletal Systems Transportation 2) Vascular System of Energy and 3) Nervous System of Communications. We spend globally $2 trillion on infrastructure. We have transportation networking of highways, rails, airports, ports. Then energy maps of oil, gas, electric grids and power. Finally connectivity is based on the internet.

Functional Geography
He stated that to understand the internet communications you needed a map. There is Functional Geography (FG) mapping which is more relevant than the political maps that dominate our walls. FG shows how business comes together. Singapore is the capital of business in SE Asia because of its power of connectivity. Even though Singapore is an island of five million people, it is critical to the entire Southeast Asia connectivity. There are three hostile governments in that section of the world and yet they are all working together to master plan the economic future and crossing state lines. Tokyo is the biggest city in the world but the Pearl River Delta (PRD)is now the largest area of the world and has overtaken Tokyo. The PRD has 60 million people and a GDP of $2 trillion. How did this happen? PRD is one of the most densely connected places in the world. SEZ was an opening in China to allow certain parts of China to do business globally and to invest in U.S. real estate and finance. To build high infrastructure will be the way that we grow a country. It’s all about growing infrastructure and connectivity growth; not military growth.

Asia has five billion people with 60 million in the Pearl River Delta region. Within a two hour flight, you can reach five billion people and there is one common factor. It has megacity archipelagos that define humanity. The growth is organic and irreversible because people want to move to the city. By 2030, there will be 50 megacities in the world. When you map economic connectivity, one city can affect millions of people. These cities are all capitals and not just business hubs. If you change the degree of connectivity then a city will be great because you can’t change your geography like Dubai.

World Population
Projections made in the 1990s stated that the world population would reach 15 billion people. Now projections are for only 10 billion people and we will miss that projection. This affects global policies. By 2040, the world will reach 10 billion people and will then flatten out and then there will be a population decline. That reality is again based on past projections. We will need to see the efficiency of productivity. Where’s your business and where do you need to be with your work? It’s looking at the Megapolis map that counts and not the political maps. It’s the target maps. If a city isn’t doing well then a country isn’t doing well. It’s not the country that grows a city. A city grows a country and matters much more. A city needs to connect. With international affairs, we see zero sum competition of cities. Parag sees a world in which 50 cities will become more connected in the future. Europe has it right in some ways by investing in “fixed capital formations.” Good infrastructure is critical. Russia can’t rely on oil and gas. Once energy prices crash then there’s no growth because there’s no infrastructure to fall back on. No country left the Eurozone. They all need each other for connectivity.

Europe connected its oil connectivity infrastructure and countries share resources with each other. The density of infrastructure within the country is critical.

You won’t see young people with growth without having fast speed internet and business growth.

There is a need to remap the world based on Connectivity Geography. There should be digital connectivity with U.S. commuters and consumer patterns. There are 50 U.S. states that really form only 40 functional clusters. The U.S. map has seven natural regions. Hi-speed internet connections exist only between 40 cities but zero have been built. We are underinvesting in infrastructure and it has a life cycle. We are inefficient in the way that we move food with bad roads. We are decades overdue and need to spend $2.4 trillion on infrastructure. And yet the US is only spending $200 million on infrastructure. You have to build this map based on economic growth and get out of inefficient ports, backroads and pipelines that aren’t connected.

North American Union
We need hi-speed rail to Hyperloop. A few areas of the U.S. are looking at this rail system. Dubai and the Netherlands are moving ahead with cities that are connected with hi-speed rail. There are 50 million people who travel cross borders legally between U.S. and Canada and 35 million from U.S. and Mexico. We need new trilateral infrastructure spending of $220 billion that could add thousands of jobs. There are $2.4 billion of cross border goods on a daily basis. Think geology and not nationality. Get rid of NAFTA and create a North American Union. Canada and the U.S. share electric, gas power, oil pipelines and railroads. The same is true with Mexico. Maybe a North American Union makes sense.