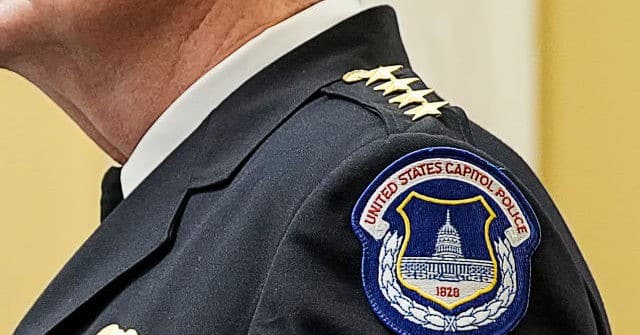 Posted By: Sean Davis via The Federalist February 9, 2022

Please Share This Story!
PDF 📄
To the Technocrat mind, surveillance is seen as some sort of divine right that gives them a moral free pass to look at anything they choose to look at. In this case, the Capitol Police appear to have been flipped into a type of  Praetorian Guard for the radical left to spy on certain Congressmen and their staff. In a sane world, congressional and staff perpetrators would be summarily ejected from the capitol. ⁃ TN Editor

The inspector general for the U.S. Capitol Police (USCP) has opened a formal investigation into whether the law enforcement agency tasked with securing the Capitol has been inappropriately surveilling elected members of Congress, their staff, and visitors to their offices, The Federalist has learned. The opening of the investigation follows news reports and accusations from lawmakers that USCP has overstepped its bounds as it tries to recover from the January 6 riots that tarnished both the Capitol and the reputation of the law enforcement agency that was supposed to keep it safe.

USCP Chief J. Thomas Manger confirmed the opening of the inspector general investigation in his response to congressional inquiries about USCP police tactics, reported in a January 24 article published by Politico, including surveilling and compiling intelligence dossiers on members of Congress, their staff, and visitors.

“While I am confident in our methods, I am asking the USCP Office of the Inspector General to review the USCP’s programs related to these security assessments to assure both this Committee, the Congress as a whole, and the public that these processes are legal, necessary, and appropriate,” Manger wrote to seven Republican lawmakers.

According to the Politico article, USCP analysts had been directed by Julie Farnam, the acting director of USCP’s Intelligence and Interagency Coordination Division, to “run ‘background checks on people whom lawmakers planned to meet, including donors and associates.”

“When staff were listed as attending these meetings, Capitol Police intelligence analysts also got asked to check the social media accounts of the staffers,” the Politico article alleged.

In his letter to lawmakers, Manger denied the allegations detailed in the Politico article and claimed USCP’s activities were both appropriate and legal.

Suspicions that USCP may not be acting appropriately did not arise in a vacuum, however. In November 2021, a USCP officer entered the congressional office of Rep. Troy Nehls, R-Tex., and took a photo of a whiteboard in Nehls’ legislative office detailing various legislative plans being considered by Nehls and his staff. In a formal police report filed several days after the incident, the officer wrote that he had been conducting a routine security patrol on Saturday, November 21, and discovered that one of the doors to Nehls’ office was open.

The report claimed that the officer entered Nehls’ office and found a whiteboard that contained “suspicious writings mentioning body armor[.]” The officer reportedly took a photo of the whiteboard, which was then passed around to analysts within USCP. The following Monday, USCP dispatched three plain-clothed intelligence officers to Nehls’ office and questioned a staffer who was there about the whiteboard and the legislative proposals it contained.

Just days before the USCP officer entered Nehls’ office and took a picture of the whiteboard Nehls and his staff used to brainstorm and catalog legislative ideas, the Washington Post ran a story about a federal government contractor in rural Texas who defrauded the United States by supplying Chinese-made body armor instead of body armor manufactured in the United States.

“From his home in rural Texas, a would-be defense contractor spun a web of fake companies and testing reports to pass off Chinese-made body armor as American equipment that met rigorous standards for use by the State Department and U.S. law enforcement partners in Latin America,” the Washington Post wrote on November 16, 2021. “Tanner Jackson, 32, pleaded guilty Tuesday in Alexandria federal court to one count of wire fraud, a felony punishable by up to 20 years in prison.”

According to Nehls, who previously served as sheriff of Fort Bend County, Texas, his office whiteboard specifically called out faulty Chinese body armor. In fact, that Washington Post article was a key catalyst spurring Nehls to consider drafting legislation banning the procurement of Chinese body armor, a spokesman for Nehls told The Federalist.

What the police report did not include was any reference to multiple items on Nehls’ whiteboard immediately following the words “body armor” referencing Export Administration Regulations dealing specifically with Chinese imports or U.S. Department of Justice standards for certifying body armor.

In correspondence on the matter with the House Administration Committee, USCP Chief Manger said the responding officer who investigated Nehls’ office was also concerned by “an outline of the Rayburn Building with an X marked at the C Street entrance” drawn on the whiteboard. A Nehls spokesman told The Federalist it was little more than a crude map to help an intern find an ice machine in the Rayburn House Office Building.

“If Capitol Police leadership had spent as much time preparing for January 6 as they spent investigating my white board, the January 6 riot never would have happened,” Nehls, a former law enforcement officer, told The Federalist. “When I was a patrol officer responding to a call, I didn’t have the time or authority to go rifling through someone’s personal papers. There are serious 4th Amendment, constitutional issues at play here.”

Although Manger claimed in one e-mail that USCP agents were concerned the whiteboard may have contained a “veiled threat” to Nehls’ life, USCP never personally contacted Nehls to warn him that he may have been in danger, Nehls told The Federalist.

The Capitol Police’s treatment of Nehls and his office only fueled the fire of suspicion between lawmakers and USCP leadership that had been smoldering following the January 6 riot. One Republican congressional aide told The Federalist that rather than addressing the massive security and intelligence failures by USCP that allowed the post-election protests to spiral into riots, House Speaker Nancy Pelosi instead doubled down on failure and used the uproar as a pretext for turning the Capitol Police into her own force of political mercenaries.

“Instead of fixing the obvious problems with Capitol security, Pelosi used January 6 as an excuse to create her own personal Praetorian Guard,” the aide said.

Every time that I hear the words, ‘Capital Police’, I think of Mall ‘Cops’ (Rent-A-Cops)! LOL