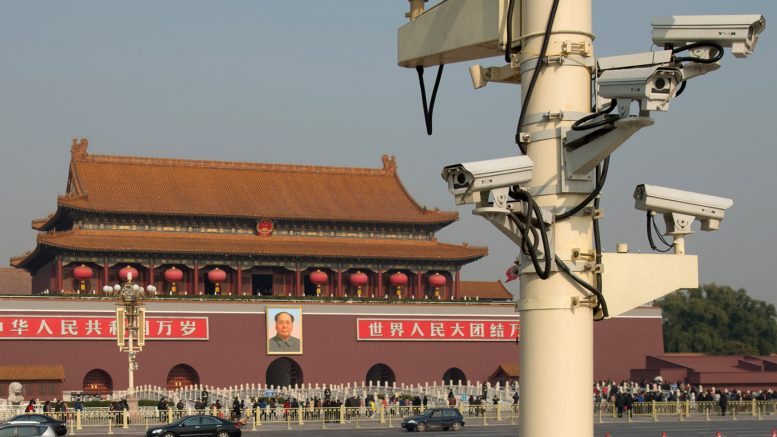 Posted By: Jessica Batke and Mareike Ohlberg via ChinaFile November 4, 2020

High atop Mount Xiqiao, an extinct volcano that soars above the Pearl River Delta, a towering statue of the Buddhist goddess Guanyin gazes down on the concrete sprawl of the city of Foshan. For centuries, the mountain’s scenic caves and waterfalls provided a refuge for scholars and artists. But today, Xiqiao is a far more crowded place. Some five million tourists visit each year. And as they wend their way up the mountain through groves of peach and banyan, Guanyin is not the only one keeping watch.

In 2019, local officials in Xiqiao, a district of Foshan, devised a plan for the ideal placement of surveillance cameras throughout their jurisdiction. A visitor making an ascent of Mount Xiqiao might first have her face captured by one of the three cameras at the Xiqiao bus station, and again at the bus stop closest to the mountain’s base. If she followed the usual route, a camera could next catch her entering the Qiaoyuan public bathroom, resting a moment to admire the Tingyinhu waterfall, or stopping in for a snack at the Qiaoshan hotel. All together, Xiqiao’s police would have at least nine chances to collect images of this visitor’s face during her journey. And when she reached the summit, a tenth camera, mounted just beside Guanyin’s own serene visage, would snap a final shot.

Over the past five years, local Communist Party officials charged with maintaining “social stability” in Xiqiao have planned purchases of surveillance technology to blanket their town with cameras. This would help bring about a “breakthrough in addressing the difficult problem of how to control people,” explained a document outlining Xiqiao’s desired purchases. Government records show that officials made at least six separate surveillance equipment purchases between 2006 and 2019, with the goal of installing at least 1,400 cameras throughout Xiqiao, including 300 facial recognition cameras last year alone.

Xiqiao may be just a small district of a fairly ordinary Chinese city (albeit one on the leading edge of surveillance practice in China), but the worries and aspirations of its officials are hardly unique. Rather, they reflect a profound unease among China’s leaders about what can happen when the country’s citizens go unwatched. Across China, in its most crowded cities and tiniest hamlets, this has led to an unprecedented surveillance shopping spree by government officials. The coordination of the resulting millions of cameras and other snooping technology spread across the country remains partial at best, its efficacy uncertain. Yet, despite these limitations, officials in China are working to make the system as effective and advanced as possible.

These are among the key findings of ChinaFile’s analysis of some 76,000 government procurement notices and corresponding documents related to the purchases of surveillance technology by both central and local governments across China between 2004 and mid-May 2020—the most comprehensive accounting of China’s surveillance build-up to date.

In 2015, a national policy document issued by nine different Party and government bureaucracies called for “public safety video-surveillance construction, networking, and applications” across China. The policy described such surveillance systems as not only a way to combat crime, but also an important mechanism for enhancing “social management” and “safeguarding national security and social stability.” “Given the growing openness of society, the increasing convenience and speed of transportation infrastructure, and the widespread adoption of various emerging communication technologies,” as numerous government documents and media reports put it, using identical language, “people with all kinds of interests can cross jurisdictions to band together, stir up trouble, and assemble illegally. This presents a serious challenge to preventing, perceiving, and predicting vicious crimes and mass incidents.” To combat these dangers, China’s National Development and Reform Commission embarked on a project called “Xueliang Gongcheng,” or “Project Sharp Eyes” (evoking Mao Zedong’s aphorism that celebrated people who spied on one another). Building on and supplementing Project Skynet, Safe Cities, and other previous surveillance campaigns, China’s government aims to extend video surveillance coverage to 100 percent of China’s “key public spaces” by the end of this year.

Unsurprisingly, the enterprise has become a subject for analysis as sweeping and grandiose as its own ambition, analysis that too often mistakes official rhetoric for results. However fervently they might desire it, China’s leaders have not built an all-seeing, all-knowing panopticon capable of tracking anyone in the country, anywhere, at any time.

Journalists and advocacy groups have rightly focused much of their surveillance reporting on the Xinjiang Uighur Autonomous Region, where China’s government has constructed a radically invasive system to monitor the region’s ethnic minority Muslims. What has been far harder to see are the details of the surveillance buildup elsewhere in the country. To what degree is Xinjiang a model for the rest of the People’s Republic of China (PRC)? Who, exactly, are local governments elsewhere trying to track? Why do they think such surveillance is necessary? How much does the application of national surveillance plans vary from place to place? How costly is it to local governments? And how well do any of these systems actually work?

These were some of the questions ChinaFile sought to answer in its analysis of procurement notices from the Chinese Government Procurement Network website, where they are made public to allow companies to bid to fulfil them. In addition to itemizing the devices, software, and maintenance services officials seek to purchase, as well as noting final purchase prices and names of winning companies, many procurement notices include lengthy addenda which reveal how officials shopping for, say, thermal-imaging cameras, WiFi sniffers, or facial recognition software understand the purpose of their investments, how they think about public safety, and how they evaluate their current ability to achieve it.

To be sure, what officials propose and even ultimately purchase is far from an infallible predictor of what they install or how effectively they deploy it. The capacity of China’s government, both at the central and local level, has limits. It is provisional, bounded by the mundane realities of bureaucracy and governance: time, money, competing priorities, and human error. While local officials frequently echo the broader goals of their bosses in Beijing, they must also contend with realities on their home turf.

That said, though procurement notices can’t perfectly measure surveillance capacity on the ground, they do offer an excellent view of the government’s intent. In their aggregate and in the richness of their individual details, the tens of thousands of notices ChinaFile analyzed sharpen what has been a blurry picture of this highly consequential aspect of Chinese governance. Together, they paint a stark portrait of a leadership craving the ability to penetrate ever deeper into Chinese citizens’ private lives and animated by fear of a population on the move. They also portray the leadership’s utmost confidence—faith even—that if only it possesses sufficient quantities of the right technology, then there exists no threat it cannot detect and eliminate.

The onset of the COVID-19 pandemic, with its attendant lockdowns, contact tracing, and health assessments, has only intensified this impulse.

China is not the only country that surveils its citizens, of course, and not the only place where surveillance technology, such as predictive policing, leads to human rights abuses. At the same time, says Daragh Murray, an expert in conflict, artificial intelligence, and international human rights law at the University of Essex, unlike their counterparts in the United States and the United Kingdom, authorities in China use such technology “within a much broader repressive infrastructure . . . a system attuned to repression.”