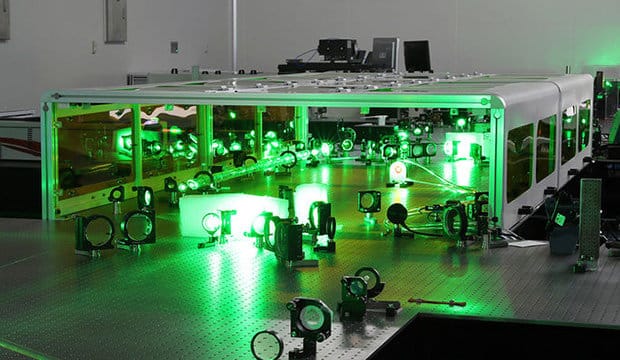 Why would Technocrats want to rip holes in outer space? Because they can. China is a Technocracy that believes the answer to everything is found in science and only science. Super-lasers have application in weather modification, terrestrial warfare and space warfare, and China can be expected to dominate all three.  ⁃ TN Editor

Boffins in Shanghai, China, have been designing the world’s most powerful laser.

The team has already made history with its earlier invention, the Shanghai Superintense Ultrafast Laser Facility have already set records.

The machine is small enough to fit on a tabletop, and contains a disc, the width of a frisbee, which is made of titanium-topped sapphires.

But this small device, by pushing light through the crystal and refracting it off a series of mirrors and lenses, is able to produce unbelievable amounts of power.

The laser set records in 2016 when it produced a pulse of 5.3 petawatts (million billion watts).

The blasts are incredibly brief, lasting less than a trillionth of a second.

But the team hopes to beat its own record, and produce a 10 petawatt shot — or 1,000 times the power of all of the world’s electrical grids combined.

This year physicist Ruxin Li and his team are planning on building a laser that will pack a mind-boggling 100 petawatt burst.

Called the Station of Extreme Light, the team hopes the laser will be able to tear a hole in the fabric of space — a phenomenon known as “breaking the vacuum”.

This sci-fi-sounding process would involve using the highly concentrated beam of light to tear electrons and antimatter positrons from space, to prove Albert Einstein’s famous E=mc2 theory is true.

Li explained what the significance of this is: “It would mean you could generate something from nothing.”

The incredibly powerful laser could be used to make particle acceleration far cheaper and easier to do — making the Large Hadron Collider in CERN obsolete.

B.S.
These “scientists” are just as bad liars as politicians!