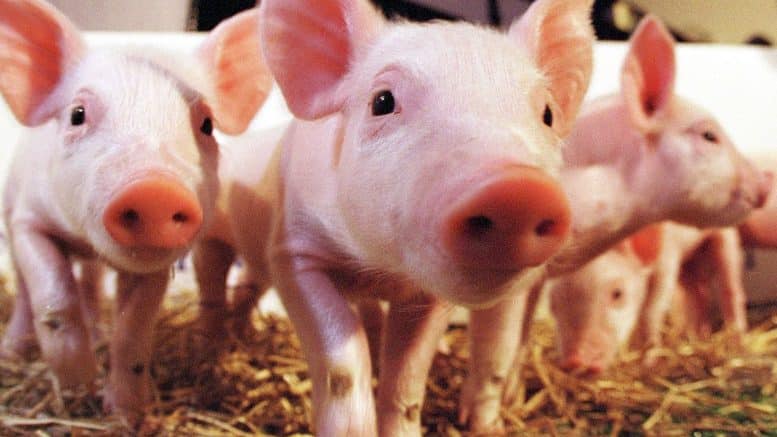 Please Share This Story!
PDF 📄
Because of a lack of ethical or moral boundaries, China leads the world in radical gene editing and cloning technology. To bolster pork production, a fully automated process has been developed to rapidly clone pigs. The human incubators of Huxley’s Brave New World don’t seem that far off now. ⁃ TN Editor

Researchers at China’s Nankai University claimed this week that they successfully cloned pigs through an entirely automated process for the first time in March, the South China Morning Post (SCMP) reported on Thursday.

“Each step of the cloning process was automated, and no human operation was involved,” Liu Yaowei, a member of the research team that developed the robotic cloning system, told reporters this week.

Removing humans from a previously developed cloning system helped streamline the process and improved the clones’ success rate, according to Liu.

Nankai University had already claimed to clone pigs using robots in 2017, though the process used at the time included human contributions. The human involvement, the Chinese scientists claimed, correlated with a higher margin of error that Liu’s team claimed to have successfully eliminated during its latest cloning experiment through improved algorithms. These algorithms, used by the scientists’ AI system, allegedly instructed robots to perform actions more accurately than humans.

“Our AI-powered system can calculate the strain within a cell and direct the robot to use minimal force to complete the cloning process, which reduces the cell damage caused by human hands,” Liu said this week.

Nankai University’s cloning development, if true, is especially significant in China, which is the world’s top consumer and producer of pork. The nation currently relies heavily on the import of breeding pigs to sustain its pork industry. A reliable technique for cloning pigs could provide a cheaper pork source for China’s agriculture industry that would additionally benefit Chinese consumers.China’s pork industry took a massive hit from 2018 to 2019 when a nationwide outbreak of the African swine fever virus decimated the nation’s pig population and killed off much of its domestic breeding pool. Beijing has promoted an agricultural campaign in the years since then designed to wean Chinese pig farmers off of imported stock and encourage them to instead breed self-sustaining herds.