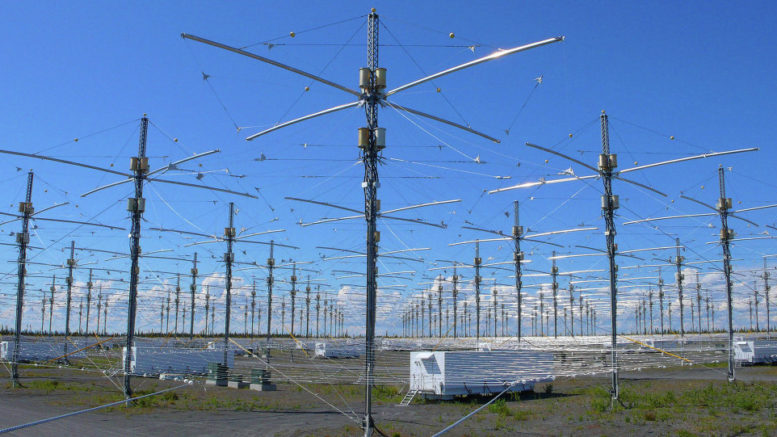 Please Share This Story!
PDF 📄
Make no mistake about geo-engineering and HAARP: It is driven by Technocrats in the military to weaponize weather against other superpowers. Messing with the ionosphere is potentially existential to humanity. ⁃ TN Editor

China and Russia have modified an important layer of the atmosphere above Europe to test a controversial technology for possible military application, according to Chinese scientists involved in the project.

A total of five experiments were carried out in June. One, on June 7, caused physical disturbance over an area as large as 126,000 sq km (49,000 square miles), or about half the size of Britain.

In another experiment on June 12, the temperature of thin, ionised gas in high altitude increased more than 100 degrees Celsius (212 degrees Fahrenheit) because of the particle flux.

The particles, or electrons, were pumped into the sky by Sura, an atmospheric heating facility in Vasilsursk built by the former Soviet Union’s military during the cold war.

The results were “satisfactory”, the research team reported in a paper published in the latest issue of the Chinese journal Earth and Planetary Physics.

Professor Guo Lixin, dean of the school of physics and optoelectronic engineering at Xidian University in Xian and a leading scientist on ionosphere manipulation technology in China, said the joint experimentation was extremely unusual.

“Such international cooperation is very rare for China,” said Guo, who was not involved in the experiment. “The technology involved is too sensitive.”

The sun and cosmic rays produce a large amount of free-flying, positively charged atoms known as ions at altitudes from 75km to 1,000km. The layer, or ionosphere, reflects radio waves like a mirror. The ionosphere allows radio signals to bounce long distances for communication.

The militaries have been in a race to control the ionosphere for decades.

The Sura base in Vasilsursk is believed to be the world’s first large-scale facility built for the purpose. Up and running in 1981, it enabled Soviet scientists to manipulate the sky as an instrument for military operations, such as submarine communication.

High-energy microwaves can pluck the electromagnetic field in ionosphere like fingers playing a harp. This can produce very low-frequency radio signals that can penetrate the ground or water – sometimes to depths of more than 100 metres (328 feet) in the ocean, which made it a possible communication method for submarines.

Changing the ionosphere over enemy territory can also disrupt or cut off their communication with satellites.

The US military learned from the Russian experiment and built a much larger facility to conduct similar tests.

The High Frequency Active Auroral Research Program, or HAARP, was established in Gakona, Alaska, in the 1990s with funding from the US military and the Defence Advanced Research Projects Agency.

The HAARP facility could generate a maximum 1 gigawatt of power, nearly four times that of Sura.

China is now building an even larger and more advanced facility in Sanya, Hainan, with capability to manipulate the ionosphere over the entire South China Sea, according to an earlier report by the South China Morning Post.

I wish this author along with a plethora of alternative writers…. would stop deluding himself/ themselves when it comes to the now very apparent Grand Illusion that treats Russia China USA et al, as ‘Separate Entities’…they is/are ‘One & the Same’ under the whip of the 0.001% pyramid cap NWO/BORG…via the UN’s connived & contrived Globalist mandates that coerce the general public into the all encompassing slippery slopes of the emerging ‘Social Credit Scoring’ juggernaut that’s being rolled out as a thinly disguised> totalitarian/technocratic WW dictatorship…under the euphemistic bear traps of surreptitiously deployed straw man ‘memes’ such as *Sustainable *Green… Read more »

I’m not sure who you are calling self-deluded but perhaps you should actually read Technocracy Rising: The Trojan Horse of Global Transformation and Technocracy: The Hard Road to World Order

Actually I’m calling YOU as being deluded via a state of cognitive dissonance..as politely as I can …b/c I respect what you are doing. You have all the pieces to the puzzle in your hands but as yet to failed to realize that XI Putin Trump Azizi Merkel Macron et al, are merely puppeteered figureheads…actors, that read from the same song sheet every day, that’s handed to them by the NWO/BORG 0.001% Kontrollers/Shadow Master Globalist Old Black Nobility bloodline/ banksters, if you will…well paid hierarchal minions for the denizens that live in the rarefied air of the pyramid cap…that are… Read more »