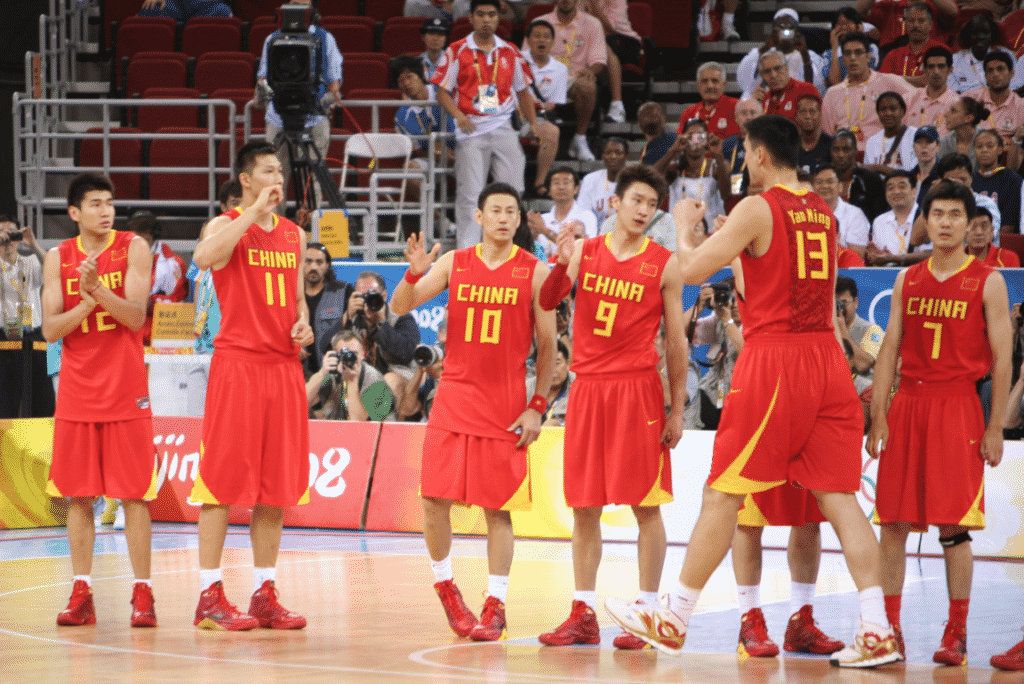 China, The NBA And The Massive Face of Globalization

Zbigniew Brzezinski co-founded the Trilateral Commission with David Rockefeller in 1973. When Brzezinski became National Security Advisor to President Jimmy Carter, his signature achievement was to bring China onto the world stage.

Furthermore, he spoon-fed the doctrines of Technocracy to China to create a super-power that would ultimately dominate everyone and every thing. This was the Trilateral’s so-called New International Economic Order, aka Globalization, aka Technocracy. Today, China is asserting its power to force subservience from everyone in sight, including the United States. ⁃ TN Editor

Let’s get one thing straight. The Chinese people, whether they appear happy or sad, support their government because they’re controlled. After generations of being beaten down, the population bows the head and bends the knee to slave masters. Call that freedom if you want to.

And if you really believe the situation in America is no better than the system in China, even with the amount of censorship alive and well in America, even with the rigging of this economy, try an experiment. Move to China and start publishing articles relentlessly critical of the government there. See what happens. Be sure to leave a copy of your last Will and Testament at home.

When the NBA commissioner and several players talk about loving their Chinese fans, they’re referring to victims of long-term terrorism. And if you press the NBA people on that point, they say, “We just want to play basketball, we just want the games.”

And they want the money. The Nike money, the Chinese money, the television money, the other merchandise money. More Chinese people than Americans watch the NBA playoffs on TV.

When, in a momentary fit of sanity, the General Manager of the Houston Rockets, Daryl Morey, retweeted FIGHT FOR FREEDOM, STAND WITH HONG KONG, the Chinese government launched a shit storm. Blacked out pre-season games, canceled press conferences, attacked NBA Commissioner Adam Silver for (partially and weakly) defending free speech. Now, calls are going out for Daryl Morey to resign from his job, to appease the Chinese government.

The big fear? A few global NBA stars would decide to step up and defend the million Hong Kong protestors, who want to knock down a bill that would allow China to extradite “criminal suspects” from Hong Kong to the mainland, where they can be charged, imprisoned, tortured, murdered. Those number one Hong Kong suspects would be persons who oppose the mainland Chinese regime.

The NBA stars, speaking out, could ignite a worldwide conflagration of public outrage aimed at the brutal government of China.

So far, that fear is unfounded. Social justice warriors LeBron James, (coaches) Steve Kerr and Gregg Popovich are silent on the specific issue of Hong Kong vs. China. No one connected to the NBA is addressing it.

We have what George Washington warned about: an entangling foreign alliance. The US, China, money.

You have to wonder at the curious timing of all this now. The Chinese government, seizing on one little tweet, blows sky high, just when NBA players, coaches, and the commissioner happen to be in China on a good will money-pumping tour. It’s as if the Chinese government wanted an excuse to attack the US, because Trump has been stirring the pot on US-China trade relations. Obliquely, the Communist dictatorship wants to demonstrate how far they’ll go to crack down against any outside criticism, and against readjustment of trade that currently favors China. Grossly favors China. (We’ll see just how good or bad the new Trump trade deal with China is.)

Who is in charge of keeping NBA players in a state of silence and compliance with the wishes of the Chinese leadership? The NBA, yes. But more importantly, the shoe companies. Nike, Adidas. They have enormous business in China. Mustn’t disturb THAT. Every famous NBA player has a big $$ shoe deal. Mustn’t endanger THAT money, either. So shut up. Play ball. Stay ignorant of politics.

The Chinese leadership is, in effect, daring the NBA to cut ties with China and lose billions. “If your balls are made of money, we have you by the balls.”

Why did the Rockefellers want to open up China trade with the West those many years ago? Why not, say, populous India instead? After all, India had some budding semblance of a representative government. Contrasted against China, India was Thomas Paine. The Rockefellers favored China because they LIKED China’s system. Massive top-down control. Absolute censorship. Violent repression. Mind control. Thus, a way to own and direct huge numbers of people and pacify them through fear and terror. Decade after decade. A GOOD MODEL FOR THE WORLD.

An American friend described an incident he witnessed years ago when he was sitting on a tour bus in China. He and his buddy were the only Americans on board. An argument broke out between two Chinese tour guides at the front of the bus. At that moment, all the Chinese passengers bowed their heads and stared at the floor. This was their reflex reaction to a dispute between two low-level officials.

So you can imagine their responses to leadership at the top. Total submission.

These are the NBA fans who have a love affair with US players. And vice versa.

Orwell, 1984: “But it was all right, everything was all right, the struggle was finished. He had won the victory over himself. He loved Big Brother.”

Orwell: “If you want a picture of the future, imagine a boot stamping on a human face — forever.”

Or perhaps a shoe, manufactured by Nike, in China.

Suppose MANY customers of Nike stop buying their shoes.

Suppose MANY NBA fans stop going to the games.

Suppose MANY viewers stop watching the games on TV.

Suppose independent researchers begin publishing lists of products made in China and bought in the US, so consumers can avoid them.

Suppose many more people wake up to the fact that the economic glue that holds Globalism together is insane—domestic manufacturers abandon their home country and set up shop in places (like China) where they make their products far more cheaply; where wages are very low and environmental concerns are nil; and then, export those products for sale back home, thereby putting competing domestic companies out of business. Suppose many more people come to see this as economic suicide. Suppose they see Globalism itself as planned suicide. Planned to raise up certain countries ruled by brutal dictators, and sink other countries where some semblance of freedom still exists. And suppose they see this plan as a strategy for bringing about planet-wide repression under any label you care to use, but turns out to be Rule by Giant Corporations and Banks Colluding with Governments over All of Earth. No exceptions permitted.

And suppose the 7.7 billion targets of this plan realize they’re all the real Deplorables, and consequently say NO.

With the many avenues of communication available to us, that could be a tidal wave of NO.

If you want to dig still further down, into the basics of economics, consider: relatively free markets can only function within a context where the playing field is level for competitors—the costs of manufacturing, marketing, and selling products are the same for everyone. Once you permit the massive import of goods from places where those costs are radically lower, you are rigging the game. The home country suffers. Companies shut down. Workers have no jobs. The general level of prosperity, whatever it was, keeps decaying. No matter how you slant and massage the numbers, no matter how many cockeyed theories you spawn, the outcome is unavoidable.

Compound this engineered tragedy by permitting those massive imports to come from a country where the citizens are rigidly controlled by a criminal regime; enter into a huge number of economic agreements with that regime; turn a blind eye to what that regime has been doing to its people; and you have a sacrifice of freedom on all fronts.

Then there is a chokehold. And then, on any occasion, for any reason, the brutal regime will issue a command:

We’re in this together;

We have no principles and neither do you.