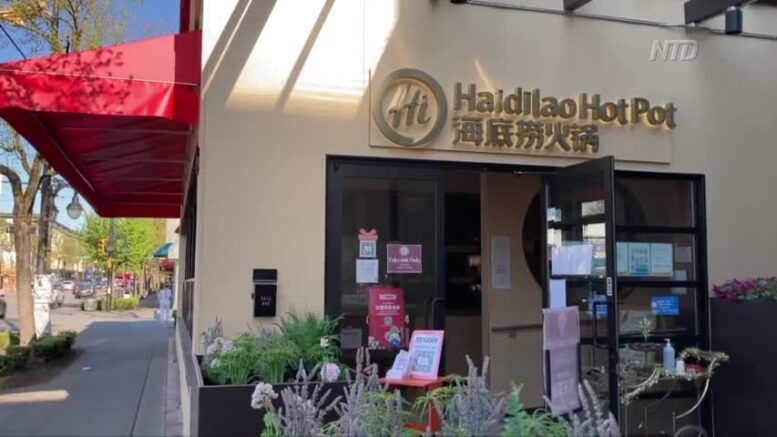 Please Share This Story!
PDF 📄
This is not Communism, it is Technocracy. Technocrats in China are spreading their web of control into every nation where they can get away with it. Now Western Canada has succumbed and allowed the tyrannical surveillance systems to infiltrate its social fabric. ⁃ TN Editor

China’s Orwellian “social credit system” that records the social and financial behaviour of individuals and corporations across China, using a vast surveillance system, has expanded globally, and is now openly operational at the renowned Haidilao hot pot restaurant, in Western Canada.

Ryan Pan, a manager with Haidilao Hot Pot in Vancouver confirmed that over 60 surveillance cameras have been installed in the restaurant at the request of the Haidilao corporation, as part of the social credit system in China. He said that the Vancouver location has 30 tables with two cameras assigned to each table.

When asked specifically why Haidilao required so many cameras to monitor staff and patrons, Ryan Pan said that the cameras were installed to “punish” staff if they didn’t adhere to corporate standards and to “people track”. Pan also said that the video is sent back to China but declined to say why this was, other than to say the reason for this was “secret.”

Founded in Sichuan, China, the Haidilao opened up at two locations in the Vancouver region, the most recent of which was opened in 2018 in a former Swiss Chalet restaurant in the trendy Kitsilano district of Vancouver. The location is within walking distance of the home rented by Huawei for staff temporarily re-located to Vancouver to assist Meng Wanzhou, the chief financial officer (CFO) of the telecom giant. Following her arrest and hearing over a provisional US extradition request for fraud and conspiracy to commit fraud in order to circumvent US sanctions against Iran. The Haidilao location is no more than 10 minutes to Meng Wanzhou’s mansion and the Peoples Republic of China Consulate. Haidilao has over 935 locations around the world and more than 36 million VIP members and 60,000 plus staff.

We reached out to Ivy Li, with the Canadian Friends of Hong Kong, who is a well-known public speaker, writer and activist on matters related to China and pro-democracy, to ask why Canadians should be concerned that China’s social credit system is now operational in Canada.

Ivy, who was born and raised in Hong Kong, had this to say in response: “Not only ethnic Chinese Canadians and residents, and businesses with Chinese ties are put at risk, but the privacy and safety of all Canadians and our society are compromised. Customers at a popular ethnic cuisine restaurant, especially in an upscale area, could be diplomats and politicians entertaining their guests, CEOs discussing their business strategies, professionals talking about company projects, journalists conducting interviews, etc., etc. Dinners discuss a wide range of subjects, especially after a couple of wine. The dining table in a popular restaurant is one of the best places to eavesdrop on someone and to get the pulse of a society.”

China’s social credit system was officially rolled out nationwide in 2014 with a plan to build “trust” in the marketplace and broader society. According to a report by USA Congressional Research Service (CRS) in 2020, China’s social credit system has developed into two connected but distinct systems: a system for monitoring individual behaviour, still in early pilot stages, and a more robust system for monitoring corporate behaviour.

The deadline for implementing China’s social credit system was 2020 when it became mandatory for all Chinese citizens to be enrolled in the national database and rated with a “social score” based on different behaviours; these “social scores” are then used to punish or reward. Praise the Chinese Communist Party (CCP) on social media and you will be given a higher score, potentially leading to benefits such as priority for school admissions, free gym services, shorter wait times at hospitals and other benefits. Illegally protest against the CCP, forget to pay your utility bill, or knowingly associate with another individual who has a low score, and you might be restricted in accessing public services, excluded from taking transportation, or perhaps your children will be denied entry into the best schools.

A similar model is applied to businesses in China called the Corporate Social Credit System (CSCS) designed to create a single, standardized reputation system for local and foreign firms alike. The system touches on virtually all aspects of a company’s business operations in China by assessing company performance, making sure they pay their taxes, uphold standard of service and other market entities. Based on their rating, Chinese authorities will reward or punish businesses that can result in penalty fees, higher inspection rates and possibly even blacklisting. Companies receiving a high corporate social credit score could result in better tax rate, market access and possibly being placed on what is known as a “redlist”.

We know that China has already started to move forward with the creation of an English language corporate social credit system version by Xinhua Credit for non-Chinese firms.

International brands are already punished if they step out of line in and out of China. They must either stay silent or actively support China’s policies if they want future access to the Chinese market. We saw the NBA’s Houston Rockets general manager Daryl Morey tweeted in support of the Hong Kong protests and ultimately was forced to apologize. More recently, the boycott of H&M and other Western brands in China after they spoke out against forced labour in the cotton industry in the Xinjiang region of China. There is already a punishment-based system for corporations that don’t comply with the CCP regime regardless of compliance with China’s CSCS.

That is so creepy. How does Canada allow this in their country and how do we keep this out of ours? BTW is there away for me to get my house off of Google Earth? I have tried via the “help” section.

I”m afraid there’s much more to be concerned about other than your property being on Google Earth. We’re watched, researched, and recorded in many ways unaware to most. American society must be the propagandized and controlled society on Earth. Not necessarily you personally, but many.

We are on a one way train…

I heard a story from a man who is a watchman about an elderly lady who flew back to Canada after a trip. She had a very important doctor’s appt., she was ill. When she got off the plane with just a few others who flew on the same plane the airport was empty. She said there were quite a few police, and others and that they ALL were Chinese. She said that were treated very badly and it took hours to get released to go to required quarantine. American leaders like Canadian leaders have committed treason against there people.… Read more »

The bureaucrats, technocrats have committed treason against the people, but not against their system. It’s all in the way “they” look at things, not us. They’ll have their techno-surveilled society, then a dusty, dry nothingness. What they were avoiding in the first place.

That place is just a tiny restaurant around here. (Vancouver) I didn’t even realize it existed, but apparently it’s across the street from Donair Dude and that Iranian store. lol

Not surprising that Trudeau, illegitimate son of Marxist Fidel Castro, has no objection to this activity in Canada.

I’ve never understood how people seem so blind to their own demise. They do not understand that technology has a very limited shelf life. They imagine a utopia where an arid desert will be.

[…] identity can also be used for a social credit score.  A high score allows you to participate in society and receive services, a low score boots you out and threatens your ability to survive.  […]