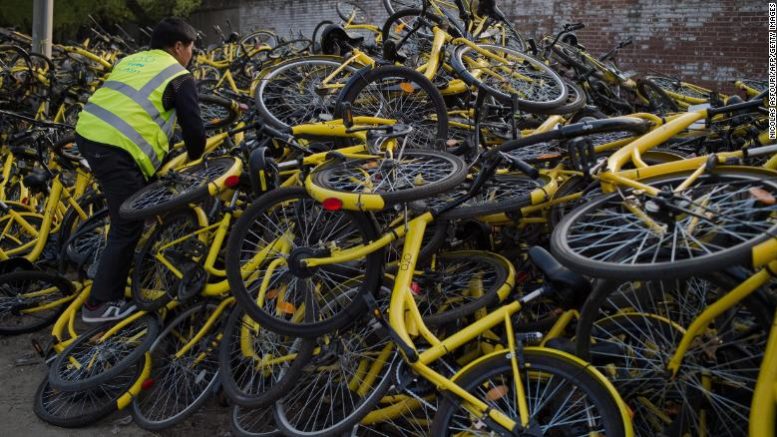 Please Share This Story!
PDF 📄
Bike and scooter sharing startups around the world are dropping like flies as the public rejects the whole concept. It was a sly scheme to get people out of cars and into bike lanes. In San Francisco, scooters are set on fire and thrown in the ocean by fed up citizens. ⁃ TN Editor

Not so long ago, Chinese bike-sharing firm Ofo was flush with cash and hailed as a game-changing tech startup. Today, it’s struggling to stay afloat.

Backed by billions of dollars from high-profile investors like Alibaba (BABA), Ofo helped pioneer the dockless bike-sharing phenomenon that swept across Chinese cities in recent years. The bikes can be locked and unlocked anywhere via a smartphone app, which means users don’t have to return them to designated stations.

Ofo fended off dozens of copycat rivals, but it now risks becoming the latest casualty of a cut-throat industry. Hordes of angry customers gathered outside its headquarters in Beijing this week to demand refunds. The company and its founder have been put on a government black list for failing to pay debts.

“They snapped defeat from the jaws of victory,” said Jeffrey Towson, a private equity investor and professor at Peking University.

So what went wrong?

Struggling to keep up

Bike-sharing startups in China burned through cash as they rushed to launch services in cities throughout the country and overseas. The chaotic expansion resulted in a string of bankruptcies and huge piles of impounded bikes.

Ofo survived that shakeout, but has struggled to keep up with its rivals since.

Dockless bike sharing was a great standalone service when it launched in 2015, but it now makes more sense for companies like Ofo to team up with other transportation platforms, analysts say.

These days, people want to use one app where “you can hail a scooter or a bike or a car,” said Tu Le, founder of consulting firm Sino Auto Insights. “That’s where the sweet spot’s going to be.”

Ofo’s rivals have already adapted to the shifting landscape.

Mobike was acquired in April by a bigger tech startup, Meituan Dianping, while Hellobike joined forces with digital payments giant Ant Financial. Both Meituan and Ant offer a wide range of services though their apps, which are used by hundreds of millions of people in China.

The partnerships gave Ofo’s rivals access to more users and also allowed them to offer their users a greater variety of services, such as ride-hailing and food delivery.