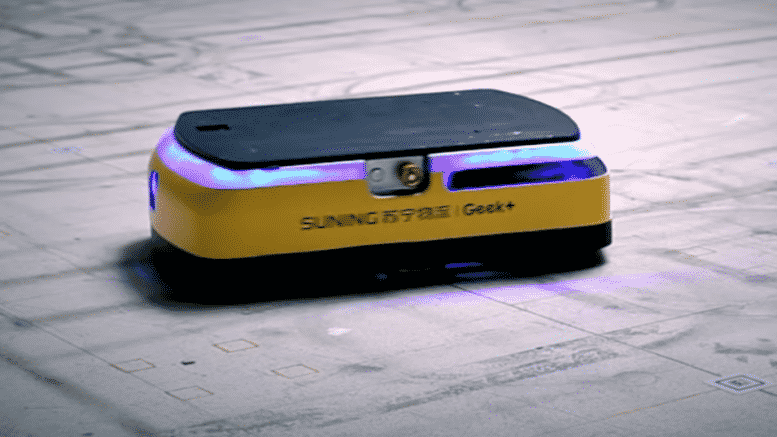 A new startup company called GeekPlus has become China’s ‘number one native supplier of logistics automation.’ Technocrats in China will export these robots to the western world, likely without any resistance from the Trump Administration.  ⁃ TN Editor

A three-year-old Chinese artificial intelligence and robotics maker no one has heard of is quietly preparing to flood its array of robots across North America starting this month.

Automation expansion in the United States happens to be more bad news for the Trump administration, as the collision of demographics, automation, and inequality, as highlighted by Bain & Company’s recent report, will unleash the perfect economic storm for at least a decade — until about 2030. Bain believes “automation will eliminate up to 25% of US jobs by 2030, with the lower-wage tiers getting hit the hardest and earliest.” This will be truly devastating, as it now seems the Chinese will be lending a further hand in the controlled demolition of the United States.

This perfect economic storm Bain speaks off is not too far away, the report detailed. According to the Association for Advancing Automation (A3), 2017 was a “milestone” year for the North American robotics market, as a record number of order units, order revenue, shipment units, and shipment revenue flourished on the continent. What is particularly troubling about the “findings is that purchases of these technologies are coming from industries that have not traditionally been known for using robotics,” said ZDNet. In other words, robots are expanding like mad in North America, turning Bain’s prediction of an automation takeover into a frightening reality.

ZDNet has recently gained knowledge of Geek+ (Beijing Geekplus Technology), a Chinese artificial intelligence and robot maker, who has exited “startup mode” and is now “China’s number one native supplier of logistics automation.”

Founded in 2015, Geek+ has shipped well over 3,000 logistics and sorting robots and developed ten robotic systems for more than thirty supply chain clients. Geek+ has grown into China’s number one supplier of warehousing and logistics robots for Southeast Asia.

From a market standpoint, however, ZDNet indicates that “non-Chinese automation suppliers” should be warned about Geek+ rapid rise to power.

“China is the largest market for industrial automation in the world, so that’s certainly a big deal for a young company. There’s reason to believe this is the inevitable shot across the bow for non-Chinese automation suppliers, which have been cashing in as China scrambles to react to rising wages with more robots. If Geek+ is any indication, native robotics companies are ascendant, which means the Chinese gravy train could be coming to a screeching halt for outsiders.

That’s very much by design. Historically, China has lagged behind Asian rivals Japan and South Korea in robotics development. But with Chinese firms spending huge money on automation technology, the central government has sought to spur native development and keep as much of that spending onshore as possible.”

ZDNet further explains how Geek+ is strong evidence that China is preparing to flood the world with robots.