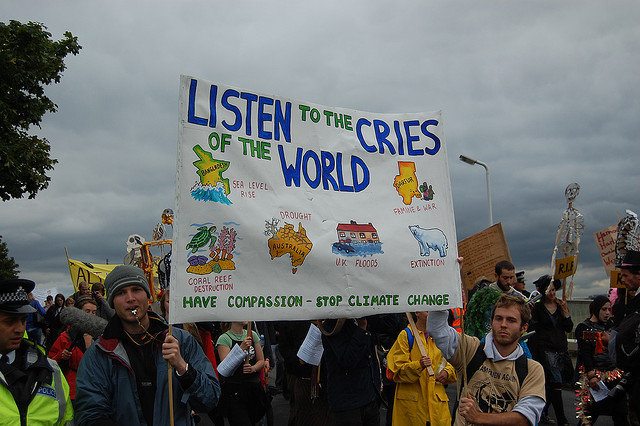 TN Note: Historic Technocracy was reborn by David Rockefeller and Zbigniew Brzezinski when they started the Trilateral Commission in 1973. The TC’s marketing tagline was to create a “New International Economic Order.” Thus, the TC became the very driver of Technocracy, Sustainable Development, Green Economy, etc. that is being spread globally by the United Nations. It is no surprise then, that advocates of globalization would complain that climate change  will hurt globalization

Within a century of Henry Ford’s first assembly line, the entire world economy has become a single, virtual conveyor belt. And that belt is getting hot.

When weather catastrophes hit, the big-ticket damages tend to come not from heat waves but from floods, hurricanes, and wildfires. Natural disasters caused billions of dollars in damage last month alone, according to a recent report, from Canadian wildfires ($3.1 billion), to European flooding ($4.6 billion), to U.S. storm damage ($1 billion).

The economic loss from 300 Indian heatwave deaths in April however is listed as “unknown.” That may not be the case for long, as such deaths are the latest canary in the coal mine—or any mine, rainforest, or valley across the Earth’s hot middle, where the building blocks of the developed economies are gouged out of the ground.

Manufacturing these days involves facilities in multiple countries, each of which has a sequential role in taking raw materials a step closer to being finished products. Imported materials may remain unfinished, even after they’re exported to the next station on the international assembly line. This “vertical specialization,” it turns out, may have a blind spot when it comes to climate change, according to new research from the Potsdam Institute for Climate Impact Research. Manufacturing is only as strong as the weakest, or in this case hottest, link in the supply chain.