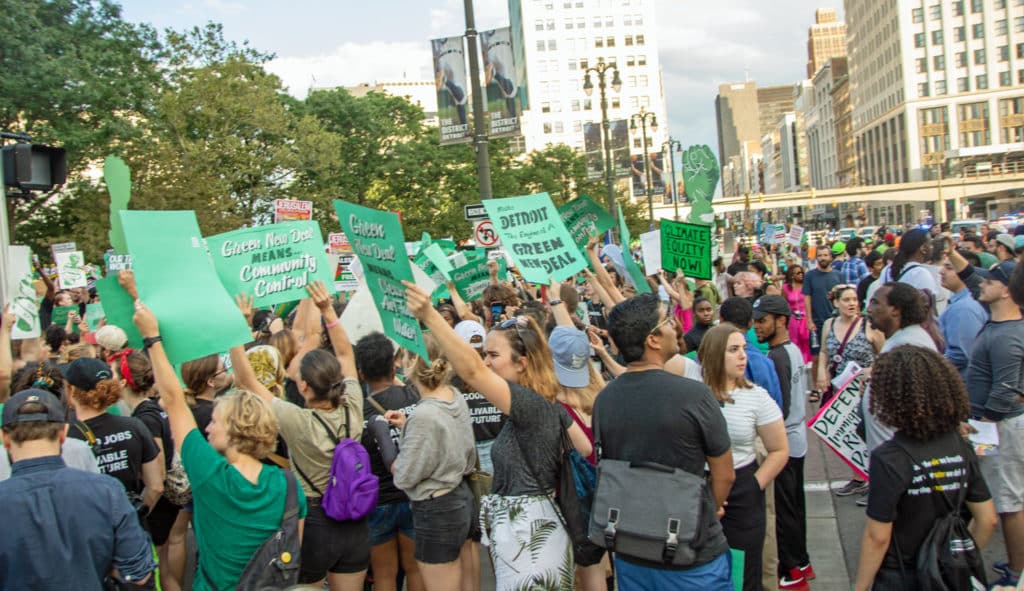 The wild predictions of cost for implementing the Green New Deal are staggering. Nonetheless, claims are now being made that GNC is cheap compared to the negative effects of ‘global warming’.

The irresponsible economic promotion of this is equally staggering. Even a college freshman taking Economics 101 knows that all economic activity is directly related to the amount of energy available to it. If energy consumption is curtailed, so is economic activity and thus, the welfare of all humans. The object of Sustainable Development is not to increase economic activity, but rather vastly reduce it.  ⁃ TN Editor

Recently, the Democratic National Committee (DNC) rejected calls for a presidential primary debate dedicated to climate change. DNC chair Tom Perez argued that focusing on climate change alone would be unfair to those whose campaigns are more focused on other issues—which might be a compelling argument if experts said those matters had the potential to lead to civilizational collapse.

This was a missed opportunity to demand that the candidates who have not authored or signed on to an ambitious proposal to transform our economy and energy infrastructure over a relatively short time frame, like the Green New Deal, explain how they’ll pay for their more moderate approaches.

“But how will we pay for it?” is rarely asked in discussions of the military budget or trillion-dollar corporate tax cuts. But the media consistently demands that Democratic candidates offer detailed explanations of how they would finance Medicare for All or dealing with the student loan crisis.

It’s the same with climate change. When Bernie Sanders released his climate proposal, The New York Times described it as a “$16 Trillion Climate Plan” and noted that it was the “most expensive proposal from the field of Democratic presidential candidates aimed at reining in planet-warming greenhouse gases” in the very first sentence of the story. Newsweek ran a piece headlined “Here’s How Andrew Yang’s Nearly $5 Trillion Climate Plan Stacks Up Against His Opponents.” And many outlets promulgated a scary but utterly bogus estimate, apparently just invented by Republicans, that Representative Alexandria Ocasio Cortez’s plan for a Green New Deal would cost taxpayers $93 trillion.

If we’re to have any hope of mobilizing the effort scientists tell us is necessary, we have to turn this question around. Because the reality is that even if we set aside the human and biospheric costs of climate change—the excess deaths from extreme weather and encroaching diseases, the refugee crises, habitat loss, and mass extinctions—the economic cost of allowing temperatures to rise even a couple of degrees above that target is simply staggering.

According to some estimates, they would dwarf the price tag associated with even the most ambitious proposals to tackle the problem, and that’s not even factoring in the new economic opportunities that transitioning away from fossil fuels would confer on countries that take the lead in that process.

Although the cost estimates vary, there is almost as much agreement on this broad point among economists who have studied the potential impacts as there is within the scientific community that human activities are warming the planet.

In 2015, the Economist Intelligence Unit compiled a peer-reviewed report warning that “the asset management industry—and thus the wider community of investors of all sizes— is facing the prospect of significant losses from the effects of climate change.” Using an average of current warming models, they projected that investors would lose $4.2 trillion in assets by the end of the century, “roughly on a par with the total value of all the world’s listed oil and gas companies or Japan’s entire GDP.” The researchers added that “the average losses to be expected are not the only source of concern; on the contrary, the outliers, the particularly extreme scenarios, may matter most of all.” In the worst-case scenario they considered, 10 percent of the world’s assets would be wiped out.

That’s just the losses to investors. They note that “while the value of future losses from the private sector is substantial, this is dwarfed by the forecast harms when considered from a government point of view.”