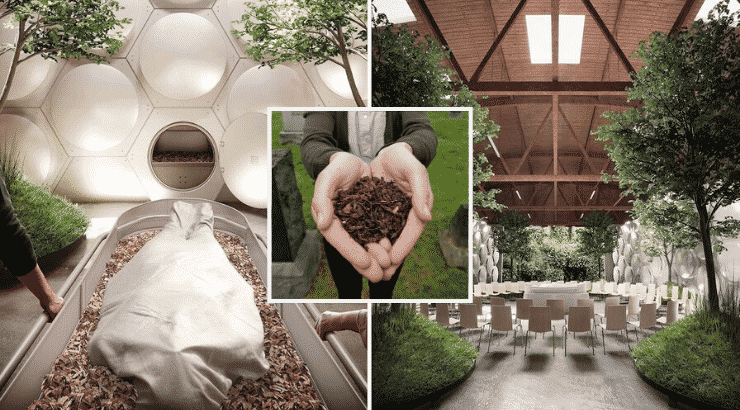 Please Share This Story!
PDF 📄
Cremation releases too much “toxic” CO2 so the answer is to allow composting of your dead loved ones to be used in your vegetable garden. This is one step away from “Soylent Green”. Global warming lunacy becomes more bizarre with every passing year, and it should be rejected. ⁃ TN Editor

California will begin offering the option of human composting after death thanks to a bill recently signed into law that aims to tackle climate change.

Human composting, also known as natural organic reduction (NOR), would be an option for residents who don’t want to be buried or cremated upon their death – starting in 2027.

The process involves placing the body inside a long, reusable steel container along with wood chips and flowers to aerate it – allowing microbes and bacteria to do break down the remains.

Approximately one month later, the remains will fully decompose and be turned into soil.

Advocates for the bill, which was signed into law by Gov. Gavin Newsom on Sunday, have said that NOR is a more climate-friendly option.

Cremation in the U.S. alone emits about 360,000 metric tons of carbon dioxide per year, according to National Geographic.

The bill bans the combining of various peoples’ remains unless they are related.

But it does not make it illegal to sell the soil that results from the process or use it to grow food for human consumption.

‘AB 351 will provide an additional option for California residents that is more environmentally-friendly and gives them another choice for burial,’ Democratic Assembly member Cristina Garcia, the author of the bill, said in a statement.

‘With climate change and sea-level rise as very real threats to our environment, this is an alternative method of final disposition that won’t contribute emissions into our atmosphere.

‘I look forward to continuing my legacy to fight for clean air by using my reduced remains to plant a tree,’ she wrote, noting that she herself may choose the method when she passes away.

Micah Truman, founder and CEO of Return Home, a funeral home in the Seattle area that specializes in human composting, said there’s been growing demand for the practice in recent years.

‘With cremation, instead of sitting with our person and saying goodbye, we are very divorced from the process,’ he told The Guardian.

I wonder what they mean by “growing demand”. If the climate is in as bad a shape as they would have us believe we’d need more co2 get things growing.

Deaf Ears: CO2 is a plant food? Plants use CO2 and emit O2? Remove all CO2 and plants die? No plants, no animals? No plants and animals, no humans? Where is the fallacy? Do they plan to have nothing but robots that don’t need O2 and run on solar power??

What about mercury from filings, toxic chemicals that may be present after chemotherapy for cancer treatment, metal plates, screws and joints?
I’m not sure this method is as ‘clean’ as they think it is.

It’s been legal in Oregon for years. Oregon is even further past the point of no return than California.

Perhaps they can go full circle and use the compost as a medium for hatching insects which will then be used in our food? Unlike in Soylent Green, our planet is NOT overpopulated, particularly in Europe where fertility levels have dropped below replacement levels. California seems to always act as a test bench for every whacko to introduce the most extreme ideas available. It was California which enthusiastically took on board the pseudo-science of eugenics, in the last century, sterilising and castrating more ‘undesirables’ than the rest of the USA put together. Newsom is their poster boy .. the most… Read more »

Setting the climate change / great reset “go green” narrative nonsense aside…..I urge people to watch “the Dimming” by Dane Wigington (geoengineeringwatch.org) about the malicious, climate / weather manipulation that is and has been conducted over the last 100 years by our Military / govts – this is the real climate change narrative. RE: the article First there is major difference between recycling dead people back into Soylent green wafers and composting. Second all life is made of the very minerals and nutrients that we extract (and require) from the earth to live. Third, I believe we should be composted… Read more »