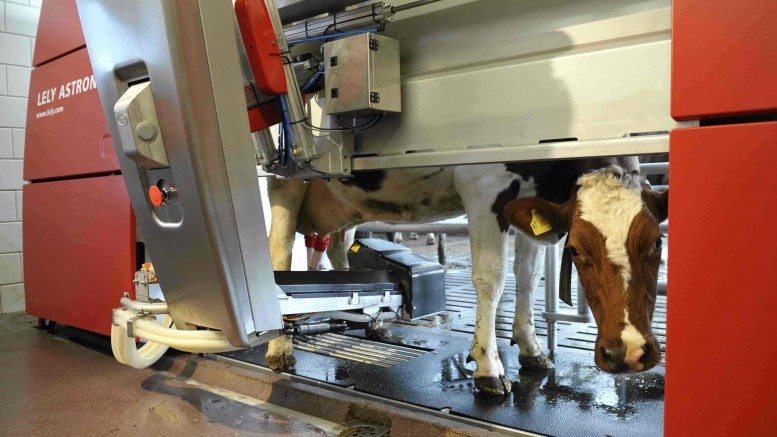 Industry after industry is succumbing to robots that will supplant the human workforce. Many dairies employ illegal immigrants, thus they will be the first human workers to be jettisoned. ⁃ TN Editor

The robots are coming to Vermont dairies, replacing what farmers call a problematic and unreliable workforce that includes undocumented immigrants and reluctant locals who are sometimes struggling with drug addiction.

At Nordic Farms in Charlotte, the first dairy in New England to install robots in 2004 to milk its cows, owner Clark Hinsdale put the issue in stark terms.

“Can you get and keep employees, or do you have to get illegal Mexicans?” Hinsdale asks. “The answer is pretty damn obvious. Almost everybody has illegal Mexicans. We have (robots).”

Hinsdale and industry observers say there are an estimated 1,500 to 2,000 migrant workers on Vermont dairy farms.

Nordic Farms has five robots milking a herd of 260 cows around the clock, every day of the year. Hinsdale once had 11 full-time employees to do that work, he now employs six people.

“It doesn’t quite cut the labor in half, but pretty close,” Farm Manager Mike LaClair said.

The robots cost about $200,000 each, but make economic sense in the long run, Hinsdale said.

Studies have shown that when cows are milked three times a day they produce 8 to 10 percent more milk. The Lely brand robots are also programmed to make sure a cow does not return to be milked too soon. Special ear tags identify each cow for the robots.

“Our robots are set to accept a cow visit in six hours,” Hinsdale said. “If a cow comes back in two hours because she thinks she can steal some grain, it won’t milk her.”

Before the new robot-equipped barn was built, Nordic Farms had three traditional barns where cows waited their turn for the milking parlor.

In Nordic Farm’s robot-run barn, cows roam free and line themselves up to be milked in an orderly parade only occasionally interrupted by a “boss cow” pushing her way to the front. In addition to milking the cows, the robots weigh them, take their temperatures, and check their milk for infections.

“The machines have pretty well got the humans beat all the way around,” Hinsdale said.

“Twice INS called me at midnight and said, ‘Your workers are not going to be there in the morning.’ A lot of farmers are faced with the same issue. They’re leaning more toward the robotic milking.”

Good deal! Get the disgusting, dirty, criminal illegals out of this country.