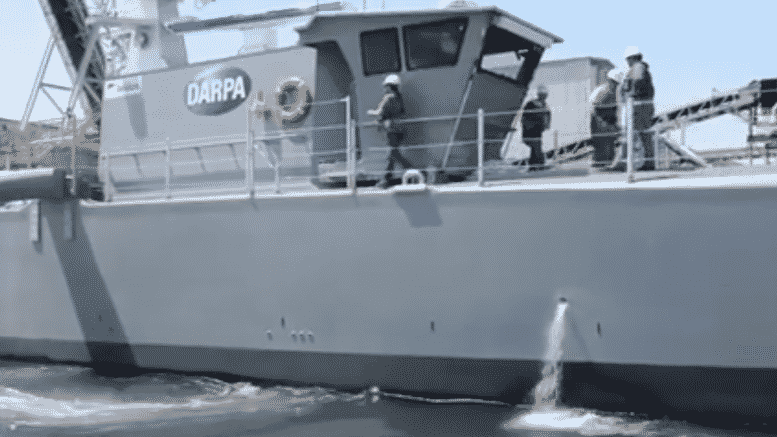 DARPA is a hotbed of Technocrats who push the science and engineering of automated weapons and advanced ‘super-soldiers’. Sea Hunter is unarmed, but the Navy is already anticipating flotillas of armed vessels. China and Russia counterparts are in hot pursuit. ⁃ TN Editor

A prototype autonomous ship known as the Medium Displacement Unmanned Surface Vehicle (MDUSV) has officially been transferred to the U.S. Navy from the Defense Advanced Research Projects Agency (DARPA) after a two-year testing and evaluation program. Named “Sea Hunter,” the Office of Naval Research will continue to develop the vessel from this point forward.

Although there’s no specific timetable for when the Sea Hunter would join active naval operations, the statement from DARPA indicated that it could happen as early as this year. The anti-submarine warfare vessel could be the first of an entirely new class of warship.

“[Sea Hunter] represents a new vision of naval surface warfare that trades small numbers of very capable, high-value assets for large numbers of commoditized, simpler platforms that are more capable in the aggregate,” said Fred Kennedy of DARPA. “The U.S. military has talked about the strategic importance of replacing ‘king’ and ‘queen’ pieces on the maritime chessboard with lots of ‘pawns.’”

he collaboration between the Navy and DARPA began in 2014, with the ship designed and developed by Virginia-based defense company Leidos, and christened in April 2016. A rigorous series of open-water tests followed, including surveillance and mine counter-measures.

According to Newsweek, the ship got its name from the mission the Navy envisions for it — stalking foreign submarines at sea. It’s relatively cheap to build at $20 million, and it’s far less expensive to run than a similar manned vessel.

“This is an inflection point,” former Deputy Defense Secretary Robert Work said in an interview with Reuters in 2016. “This is the first time we’ve ever had a totally robotic, trans-oceanic-capable ship.”