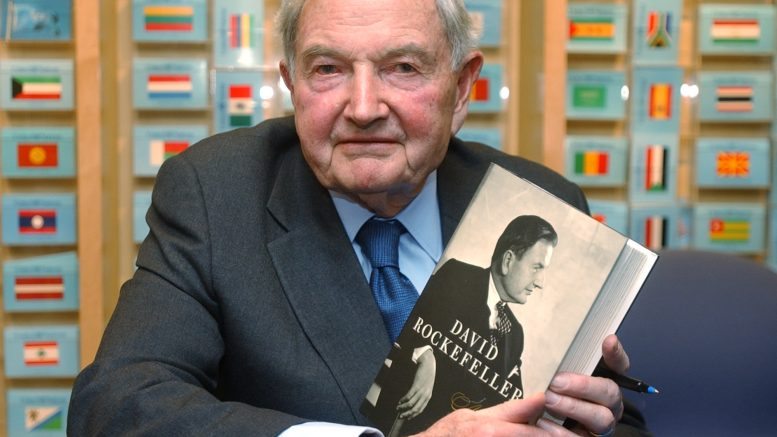 At age 101, the kingpin of modern globalization could not hold out for the Transhuman dream of immortality. However, he shaped the world like few men in history, including imposing Technocracy on the entire planet. The United Nations was beholden to him, as was China and the European Union. Actually, there was little in the world that he did not influence.

This writer has spent 40 years chronicling the activities of Rockefeller and his globalist cronies, including members of the Trilateral Commission. In the 1970s, the late Professor Antony Sutton and I co-authored two volumes of Trilaterals Over Washington, which became the definitive analysis and critique of this nefarious group.

The vacuum left by his absence will be filled with a legion of global loyalists who will continue to quest of global domination. ⁃ TN Editor

David Rockefeller was the last of his generation in a famous American family that taught its children that wealth brings great responsibility. Even as children, he and his siblings had to set aside portions of their allowances for charitable giving.

That lesson lasted throughout his life; to mark his 100th birthday in 2015, Rockefeller gave 1,000 acres of land next to a national park to the state of Maine.

Rockefeller died Monday in his sleep at his home in Pocantico Hills at age 101, according to his spokesman, Fraser P. Seitel.

He was the grandson of Standard Oil co-founder John D. Rockefeller and the youngest of five sons and one daughter born to John D. Rockefeller Jr. He was also the guardian of his family’s fortune and head of a sprawling network of family interests, both business and philanthropic, that ranged from environmental conservation to the arts.

Unlike his brothers Nelson, the governor of New York who hungered for the White House and was briefly vice president, and Winthrop, a governor of Arkansas, David Rockefeller wielded power and influence without ever seeking public office. Among his many accomplishments were spurring the project that led to the World Trade Center.

“No individual has contributed more to the commercial and civic life of New York City over a longer period of time than David Rockefeller,” said Michael Bloomberg, a former mayor and fellow billionaire. “I have long admired his commitment to the city, which began with a dollar-a-year job working as a secretary to Mayor Fiorello La Guardia. During my time in City Hall, he was always there for the city when we called.”

Unlike his other brothers, John D. 3rd and Laurance, who shied from the spotlight and were known for philanthropy, David Rockefeller embraced business and traveled and spoke widely as a champion of enlightened capitalism.

“American capitalism has brought more benefits to more people than any other system in any part of the world at any time in history,” he said. “The problem is to see that the system is run as efficiently and as honestly as it can be.”

Rockefeller graduated from Harvard in 1936 and received a doctorate in economics from the University of Chicago in 1940. He served in the Army during World War II, then began climbing the ranks of management at Chase Bank. That bank merged with the Manhattan company in 1955.

He was named Chase Manhattan’s president in 1961 and chairman and CEO eight years later. He retired in 1981 at age 65 after a 35-year career.

In his role of business statesman, Rockefeller preached capitalism at home and favored assisting economies abroad on grounds that bringing prosperity to the Third World would create customers for American products.

He parted company with some of his fellow capitalists on income taxes, calling it unseemly to earn a million and then find ways to avoid paying the taxes. He didn’t say how much he paid in taxes, and he never spoke publicly about his personal worth. In 2015, Forbes magazine estimated his fortune at $3 billion.

As one of the Rockefeller grandchildren, David belonged to the last generation in which the inherited family billions were concentrated in a few hands. The next generation, known as “the cousins,” are more numerous.

May he get his just rewards My he rest in pieces. May they bury him face down so he can’t dig out of his grave.

One can only hope his messianic dreams of world government for the global cartel will pass away with him.

I hate to see the unrepentant die, but I have no say in this man’s passing. He’ll be missed by me like smallpox, std’s & leprosy.

Hopefully Soros is right behind him!

(imho) This article is far too ingratiating & avuncular for an man responsible in part with his other ponerological 0.01% conspirators… for the horrific deaths of literally hundreds of millions of innocent men women & children.
..”All wars…are bankster wars”

Globalism is Satan’s agenda, David was only his instrument

“We are grateful to The Washington Post, The New York Times, Time magazine and other great publications whose directors have attended our meetings and respected their promises of discretion for almost forty years. … It would have been impossible for us to develop our plan for the world if we had been subject to the bright lights of publicity during those years. But, the world is now much more sophisticated and prepared to march towards a world government. The supranational sovereignty of an intellectual elite and world bankers is surely preferable to the national auto-determination practiced in past centuries.” –… Read more »