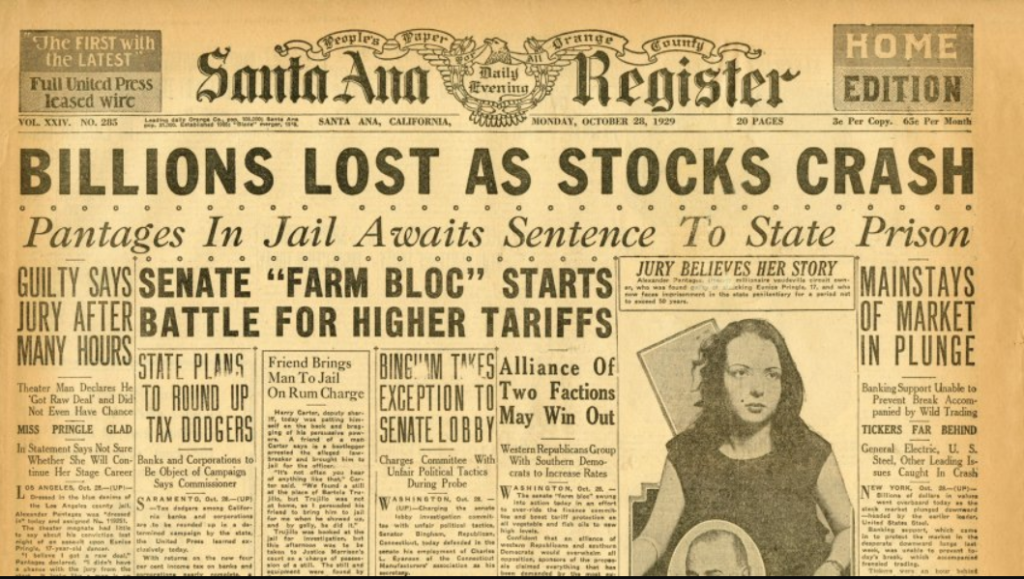 Stock markets are crumbling. Oil has cratered. Interest rates are decimated. Economic indicators are pointed straight down. What’s going on?

These are the very barometers and thermometers of Capitalism and Free Enterprise, and they are sounding a “death rattle” reminiscent of imminent demise.

The coronavirus (COVID-19) contagion in Wuhan, China was not admitted by Chinese officials until December 31, 2019. On January 19, 2020, without even mentioning the coronavirus outbreak, the new head of the IMF addressed the Peterson Institute which prompted the headline in The Guardian, “IMF boss says global economy risks return of Great Depression“.

This new IMF leader, Kristalina Georgieva is a died-in-the-wool Technocrat who worships at the alter of the UN’s Sustainable Development, aka Technocracy, and is a vociferous leader in the war to stop global warming.

Did she have an inside track on what was about to happen? Was she a co-conspirator with the UN to achieve its stated goal of killing Capitalism and Free Enterprise altogether?

While everyone else in the world is eager to blame the coronavirus for today’s tsunami of horrific economic and market news, I suggest that they take a deeper look: when you see the big picture, you can more likely predict what is about to happen next.

Technocrats are licking their chops as politicians drive society into failure and chaos because they will ultimately wind up controlling everything in the end, scientifically, of course. A great moral hazard exists in that the Humpty Dumpty of economy and politics is at risk to be given a little push off the wall.

Well, Humpty Dumpty wasn’t just nudged, he was drop-kicked off the wall.

Ever since 1932, Technocracy has wished for the death of Capitalism and Free Enterprise. It would be Technocrats who then save the day by taking over all means of production and consumption and return order to chaos: ordo ab chao.

Given the modern influence of Technocrats and Sustainable Development this writer has repeatedly warned of the huge moral hazard that exists to kick Capitalism into a casket and drive a stake through its heart.

In 2015, I wrote an article titled “The Untimely Demise of Capitalism” and it is worth presenting here again:

She amplified by adding, “This is probably the most difficult task we have ever given ourselves, which is to intentionally transform the economic development model, for the first time in human history.”

Two questions immediately come to mind. First, does the UN actually have the wherewithal to displace Capitalism and second, what does it mean for us if they do so?

The purpose of the current meeting is to herd all nations on earth, including the United States, into signing a politically binding document called the “2030 Agenda” which lists 17 Sustainable Development Goals and 169 targets by which to achieve them by 2030.

The answer to the second question is now in view: What goals and targets do they have in mind?

For sugar coating, 2030 Agenda goals include promises of Utopia such as “end poverty and hunger, in all their forms and dimensions “, ensure that “all human beings can enjoy prosperous and fulfilling lives”, and to provide “life-long learning opportunities” for all.

However, the devil’s teeth are found in the fine print. Paragraph 28 of the 2030 Agenda states:

And what experts, you ask? They will be the unelected, unaccountable and otherwise untouchable social engineers who claim to know better than you what your life should look like. You will be forced to consume less and sacrifice more. Your ability to engage in commerce, to make profits and to create inheritance will be at their whim, not yours. Goods and services will be priced according to resources used instead of supply and demand.

Figueres is absolutely right that replacing free markets will be “the first time in human history”. Although current practices of Sustainable Development around the world have caused many more economic dislocations than successes, the UN simply responds that we need more of it before Utopia is realized.

Fortunately, the Technocrats failed to gain traction and the movement faded into obscurity. But now it’s back with a vengeance, under the clever guise of Sustainable Development.

Early Technocracy did not go unnoticed, however. Aldous Huxley nailed it in his classic work, Brave New World, which was penned in 1932 at the peak of the Technocracy movement in the U.S. Indeed, the end result of Technocracy was seen to be scientific dictatorship where every detail of life is micromanaged by an unseen hand, driven by uncontestable policies and regulations.

Regardless of how we got to this point in March 2020, you can be certain that Technocrats will come out of the woodwork en masse to offer solutions to fix everything and restore order to society. Nobody will protest that these are the same people who got us into this mess in the first place.

Consider that when Greece was melting down in 2011, the European Union summarily dispatched Trilateral Commissioner Lucas Papademos to take the role of Prime Minister. At the same time Italy was headed for economic chaos, which prompted the EU to unilaterally send in Trilateral Mario Monte to assume the position of Prime Minister. No elections. The European press called these men “technocrats” as they were installed as quasi-dictators in two of the world’s most historic bastions of elected representation.

Yes, yes. The Trilateral Commission. The self-proclaimed sharpest knives in the drawer. The ones who revived Technocracy in 1973 and labeled it as their “New International Economic Order” . The same ones who then fed the whole agenda to the United Nations as Sustainable Development and then drove the world into it by using the fear mongering of global warming.

There will be more to this story in the near future. In the meantime, be assured that as far as Technocrats are concerned, Technocracy is just a hairsbreadth away from finally taking over Capitalism and Free Enterprise, and they will be dancing on their graves.