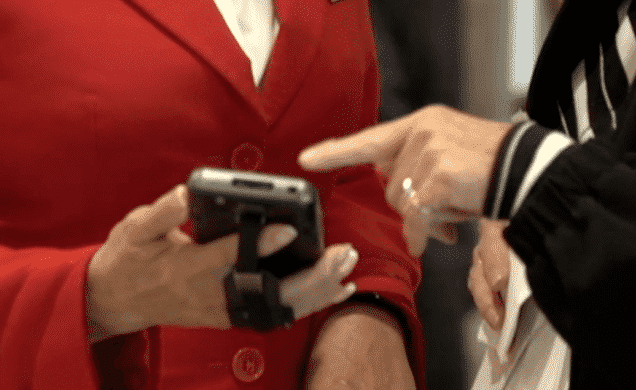 When AI and facial scanning are perfected, check-in at the gate can be totally automated and anyone on the no-fly list can be immediately carted off to detention. Technocrats apparently see nothing wrong with this scenario. ⁃ TN Editor

Atlanta-based Delta said it is running the three-month pilot project on three gates on Concourse T.

Passengers at gates T1, T2 and T3 will see mobile agent podiums and gate agents with handheld devices to make seat changes and handle other tasks. They will also use turnstile-type “E-gates” that allow passengers to “self-board” by scanning their smart phone or boarding pass.

The podiums for agents take up less space than gate counters, allowing more space for seats at the gate and boarding.

The gates also have boarding pillars that show where passengers should line up for different boarding groups, aimed at better organizing the boarding line.

The airline said it will get feedback from customers and employees during the test.

“These developments will also accelerate the culture of hospitality by minimizing barriers between agents and customers, driving even more personal engagements and exceptional customer service,” said Delta chief operating officer Gil West in a written statement.

The airline began testing boarding pillars earlier this year at five gates on Concourse B. The pillars are similar to the posts now used by Southwest Airlines to organize passengers lining up to board for its open seating system.

Delta also tested automated boarding gates several years ago but initially found they “didn’t move the needle the way we hoped.” But the airline continued to experiment with different boarding systems.

The test Delta is doing now will continue later this year with a second phase focused on integrating biometric boarding, similar to how the airline is now allowing some passengers at Washington’s Reagan National airport to board with their fingerprints. That phase will also focus on “increased agent mobility and “the customer’s digital experience at the gate.”