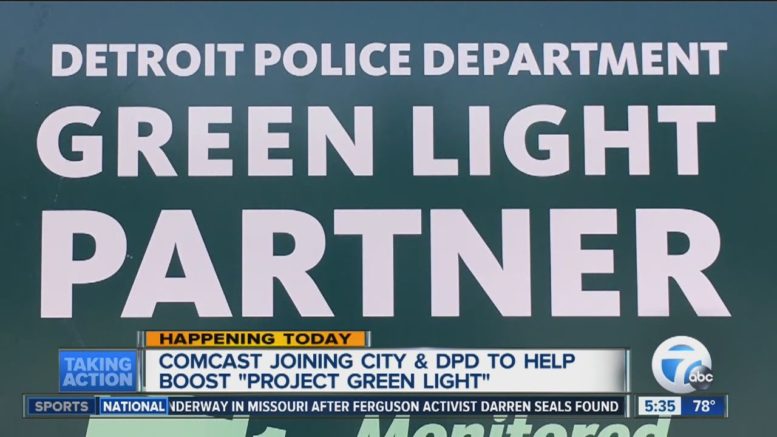 Please Share This Story!
PDF 📄
High-tech facial recognition systems are fostering a total-surveillance police state across America and citizens may not have much time left to declare it un-American, un-Constitutional and a violation of their Civil Rights.  ⁃ TN Editor

When the Detroit police department proposed a network of high-definition surveillance cameras that would stream live video from gas stations, liquor stores and other all-night businesses to a central police command center, Nasser Beydoun was one of the first to sign up.

In early 2016, Beydoun, owner of a Marathon gas station on the city’s west side, enthusiastically paid $6,000 to install cameras around his station and connect them with the crime-fighting effort, called Project Green Light. Since then, he said, crime at his gas station has fallen and revenue has climbed.

“We don’t have the trouble that we used to have,” he said. “There’s an element that used to come to the station to cause problems that no longer shows up.”

But now, as those Project Green Light cameras have expanded to 578 locations across the city, Beydoun is among the Detroiters grappling with the news that police can zero in on anyone who is filmed — including customers who are simply pumping gas — and collect personal information about them.

Detroit police officials say they’re only using facial recognition technology to identify suspects in violent crimes — not to spy on ordinary citizens. But, in a city that is about 80 percent black, with a sizable population of Middle Eastern, Asian and Latin American immigrants, critics have blasted the police for using technology that has been shown to be more likely to misidentify people with dark skin, without fully explaining it to the public.

“What happens when this software misidentifies one single person that doesn’t have the resources for a good legal defense?” asked Willie Burton, an elected member of Detroit’s Board of Police Commissioners, a civilian body that oversees the police department. “Detroit is the poorest, blackest city in America. It should be the last city where we start implementing facial recognition.”

The debate over facial recognition in Detroit has grown so heated that Burton was dragged out of a recent police commissioners board meeting in handcuffs and charged with disorderly conduct after the board’s chairwoman complained that he was interrupting the meeting. (The charge was later dropped.) The oversight board, along with Michigan’s state Legislature and the Detroit City Council, are all weighing proposals to restrict or ban the police use of facial recognition. The oversight board’s vote could come in the next few weeks.

This debate has put Detroit at the center of an escalating national conversation about high-tech crime-fighting tools that are promoted as beneficial to the public but may lead to more intrusive forms of government surveillance. Facial recognition is a policing tool that was uncontroversial two years ago but is now so contentious that several cities, including San Francisco, have preemptively banned its use by police, and Sen. Bernie Sanders, a Democratic presidential candidate, recently called for a national ban.

In Detroit, though, police have been using the technology for more than two years. That, combined with the city’s high crime rate, its demographics and the expansive network of Project Green Light cameras, has made the discussion here remarkably combative — and closely watched across the country.

Detroit police Chief James Craig is alarmed by what he calls “hysteria” over tools he believes are making one of the nation’s most dangerous cities safer. He says trained police analysts verify the identity of suspects before they’re arrested, so computer misidentification isn’t an issue. And he warns that if lawmakers stop police from using the technology, Detroiters will suffer — specifically the victims of violent crimes.

“It would be tragic,” he said. “This is about safety. This is about the victims. This is about identifying violent suspects. This is not about Big Brother and taking that man who just left that store and we got facial recognition running and say, ‘Oh, that’s Mr. Jones who was arrested six years ago.’ We don’t do that. That’s absolutely wrong.”

Beydoun hasn’t attended the raucous community meetings this summer, but as a Lebanese immigrant and a Muslim, he says he has reason to worry the government could target him or his neighbors. He chairs Detroit’s Arab-American Civil Rights League, which has joined 11 other local civil rights groups to call for a ban on facial recognition technology.

He’s also a business owner who relies on the police to keep his customers and employees safe. That puts him in a difficult place, struggling along with his neighbors and fellow business owners to figure out if police surveillance has gone too far.

…”This is about safety. This is about the victims. This is about identifying violent suspects. This is not about Big Brother and taking that man who just left that store and we got facial recognition running and say, ‘Oh, that’s Mr. Jones who was arrested six years ago.’ We don’t do that. That’s absolutely wrong.” And I’m sure that Chief Craig believes it to be wrong and would personally not do such if he maintains control. And there’s the problem. Such invasive surveillance makes every single person who passes in front of the camera a SUSPECT–most are just pumping gas.… Read more »