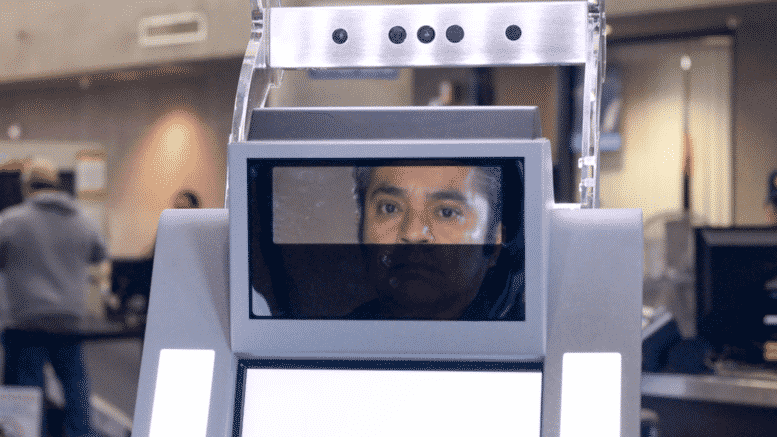 Please Share This Story!
PDF 📄
The problem is that private defense contractors don’t give a rat’s whisker about privacy, citizen’s rights or the U.S. Constitution. This is the greatest danger when forming public-private partnerships (p3) that bind private entities to government authorities. ⁃ TN Editor

Through a little-discussed potential bureaucratic rule change, the Department of Homeland Security is planning to collect unprecedented levels of biometric information from immigration applicants and their sponsors — including U.S. citizens. While some types of applicants have long been required to submit photographs and fingerprints, a rule currently under consideration would require practically everyone applying for any kind of status, or detained by immigration enforcement agents, to provide iris scans, voiceprints and palmprints, and, in some cases, DNA samples. A tangled web of defense and surveillance contractors, which operate with little public oversight, have already begun to build the infrastructure that would be needed to store these records.

After proposing the rule in September, DHS is currently reviewing, and must respond to, thousands of comments it received during the 30-day period in which the public could weigh in. The agency had signaled that the proposal would be coming when it announced last year that it would be retiring its legacy Automated Biometric Identification System, or IDENT, and replacing it with the Homeland Advanced Recognition Technology framework — stating explicitly that one of its objectives was to collect more types of biometric data and make searching and matching easier. Where HART was the vessel, the new proposed rule is the means of collecting all the new data types to populate it.

Any potential contractors tasked with rolling out the new data collection infrastructure and management won’t be decided until after the rule is finalized, but a look at the companies currently working on building out DHS’s already vast biometrics capabilities is instructive.

The contract for the current biometrics management system used by the U.S. Citizenship and Immigration Services, or USCIS, for case processing, background checks, and identity verification was awarded in 2015 to the relatively large but low-profile federal contractor Pyramid Systems, which is based in Fairfax, Virginia. Run by a Taiwanese immigrant couple who are Democratic donors, Pyramid has been contracted by the Department of Housing and Urban Development, the Securities and Exchange Commission, the Centers for Medicare & Medicaid Services, the Census Bureau, and other agencies. In a 2016 release about the contract, which is potentially worth up to $87.5 million, the company wrote that it would “provide Agile services for enhancement and operations and maintenance (O&M) of current biometrics applications used for U.S. immigration-related efforts,” using jargon for a software development methodology focused on constantly evolving to changing circumstances and a client’s needs.

Defense giant BAE Systems has a $47 million contract for USCIS biometrics support and collection, which appears to involve the mechanics of actually taking fingerprints and photographs. The technical infrastructure for the processing, searching, matching, and maintenance of the first couple of components of HART are being built by Northrop Grumman through a contract potentially worth $143 million.

These international defense conglomerates have, over the years, amassed tens of thousands of U.S. government contracts worth tens of billions of dollars, including hundreds with DHS alone, for everything from software to weapons. These partnerships between defense contractors and DHS — a sprawling agency created after 9/11 — form the backbone of a decadeslong melding of the war on terror with the war on drugs, and the expansion of an all-encompassing national security state whose reach extends inside and outside the country. BAE Systems and Pyramid Systems did not respond to requests for comment; Northrop Grumman referred questions to DHS, which responded to detailed questions by pointing back to its press release.

DHS’s data collection operations are also aided by its contracts with the surveillance state. HART, like much of the federal government’s data infrastructure, is hosted on Amazon Web Services; Amazon has made itself indispensable as its lobbying machine simultaneously pushes anti-labor, pro-surveillance, and pro-monopolization policy. The controversial facial recognition firm Clearview AI — which built its software by trawling social media and the web for billions of images to scrape — already has an active contract with Immigrations and Customs Enforcement, which, as a component of DHS, could easily match those images against the HART database. Palantir, the data-mining firm founded by billionaire Peter Thiel whose software uses data from various databases to form detailed relationship maps and establish connections between individuals, also has a contract with ICE.

That nongovernmental entities with commercial incentives and fewer limits on data use would have access to so much personal data is alarming to privacy watchdogs. “It has a private prison feel. When you start contracting out that stuff to the private sector, the private sector will never care about rights,” said Paromita Shah, executive director of Just Futures Law.