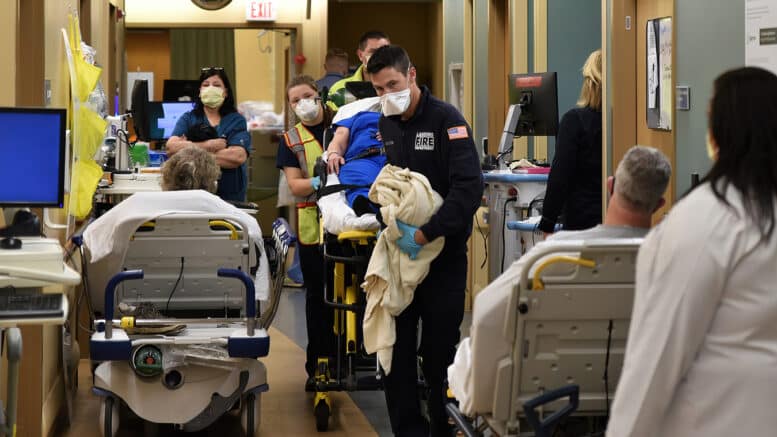 An ambulance crew weaves a gurney through the halls of the emergency department at Sparrow Hospital in Lansing, Michigan. Overcrowding has forced staff members to triage patients, putting some in the waiting rooms, and treating others on stretchers and chairs in the halls. (Lester Graham/Michigan Public Radio)

Please Share This Story!
PDF 📄
Signs of medical apocalypse are surfacing in hospital ERs across the country. The system is being overwhelmed with seriously ill patients that do not have COVID. Blood clots, heart conditions, abdominal pain and respiratory problems are common. Medical Technocrats remain silent.  ⁃ TN Editor

Inside the emergency department at Sparrow Hospital in Lansing, Michigan, staff members are struggling to care for patients showing up much sicker than they’ve ever seen.

Tiffani Dusang, the ER’s nursing director, practically vibrates with pent-up anxiety, looking at patients lying on a long line of stretchers pushed up against the beige walls of the hospital hallways. “It’s hard to watch,” she said in a warm Texas twang.

But there’s nothing she can do. The ER’s 72 rooms are already filled.

“I always feel very, very bad when I walk down the hallway and see that people are in pain, or needing to sleep, or needing quiet. But they have to be in the hallway with, as you can see, 10 or 15 people walking by every minute,” Dusang said.

The scene is a stark contrast to where this emergency department — and thousands of others — were at the start of the pandemic. Except for initial hot spots like New York City, in spring 2020 many ERs across the country were often eerily empty. Terrified of contracting covid-19, people who were sick with other things did their best to stay away from hospitals. Visits to emergency rooms dropped to half their typical levels, according to the Epic Health Research Network, and didn’t fully rebound until this summer.

But now, they’re too full. Even in parts of the country where covid isn’t overwhelming the health system, patients are showing up to the ER sicker than before the pandemic, their diseases more advanced and in need of more complicated care.

But they can hardly be accommodated. Emergency departments, ideally, are meant to be brief ports in a storm, with patients staying just long enough to be sent home with instructions to follow up with primary care physicians, or sufficiently stabilized to be transferred “upstairs” to inpatient or intensive care units.

Except now those long-term care floors are full too, with a mix of covid and non-covid patients. People coming to the ER get warehoused for hours, even days, forcing ER staffers to perform long-term care roles they weren’t trained to do.

At Sparrow, space is a valuable commodity in the ER: A separate section of the hospital was turned into an overflow unit. Stretchers stack up in halls. A row of brown reclining chairs lines a wall, intended for patients who aren’t sick enough for a stretcher but are too sick to stay in the main waiting room.

Forget privacy, Alejos Perrientoz learned when he arrived. He came to the ER because his arm had been tingling and painful for over a week. He couldn’t hold a cup of coffee. A nurse gave him a full physical exam in a brown recliner, which made him self-conscious about having his shirt lifted in front of strangers. “I felt a little uncomfortable,” he whispered. “But I have no choice, you know? I’m in the hallway. There’s no rooms.

“We could have done the physical in the parking lot,” he added, managing a laugh.

Even patients who arrive by ambulance are not guaranteed a room: One nurse runs triage, screening those who absolutely need a bed, and those who can be put in the waiting area.

“I hate that we even have to make that determination,” Dusang said. Lately, staff members have been pulling out some patients already in the ER’s rooms when others arrive who are more critically ill. “No one likes to take someone out of the privacy of their room and say, ‘We’re going to put you in a hallway because we need to get care to someone else.’”

“We are hearing from members in every part of the country,” said Dr. Lisa Moreno, president of the American Academy of Emergency Medicine. “The Midwest, the South, the Northeast, the West … they are seeing this exact same phenomenon.”

Although the number of ER visits returned to pre-covid levels this summer, admission rates, from the ER to the hospital’s inpatient floors, are still almost 20% higher. That’s according to the most recent analysis by the Epic Health Research Network, which pulls data from more than 120 million patients across the country.

“It’s an early indicator that what’s happening in the ED is that we’re seeing more acute cases than we were pre-pandemic,” said Caleb Cox, a data scientist at Epic.

Less acute cases, such as people with health issues like rashes or conjunctivitis, still aren’t going to the ER as much as they used to. Instead, they may be opting for an urgent care center or their primary care doctor, Cox explained. Meanwhile, there has been an increase in people coming to the ER with more serious conditions, like strokes and heart attacks.

So, even though the total number of patients coming to ERs is about the same as before the pandemic, “that’s absolutely going to feel like [if I’m an ER doctor or nurse] I’m seeing more patients and I’m seeing more acute patients,” Cox said.

Moreno, the AAEM president, works at an emergency department in New Orleans. She said the level of illness, and the inability to admit patients quickly and move them to beds upstairs, has created a level of chaos she described as “not even humane.”

These actually are backups for the millions of people who were postponed due to the hoaxed scamdemic virus.

[…] are suddenly FILLED with SERIOUSLY ILL, but NOT with “COVID” – Signs of MEDICAL APOCALYPSE are surfacing in hospital ERs across the country. The system is […]

this is going to get ugly, and heads should roll

While I sympathise with the staff who are working under a lot of pressure, it clearly doesn’t help that hospitals are firing staff for not submitting to having a vaccine. The utter STUPIDITY of all this.

It’s unbelievable isn’t it? I feel like I am dreaming. Humans Can’t be this stupid or evil.

Humans not , but senile Biden can

Biden’s bosses are the most evil people on the planet. Child rape, murder, torture sacrifice, you name it they do it. Their plan is to wipe out 6 to 7 billion people leaving about 500 million survivors to be AI controlled slaves for the elite. The level of evil is incredible. If they are not stopped you will experience what Hell on earth is really like.

That is an absolute yes

Stupid AND evil. It’s really hard not to go full misanthrope now. It might be less painful if I could just curse humanity and turn my back on it. Tired, sickly woman who has already been damaged by technocrats. No one stepped in for me. They didn’t know because they didn’t care. So they encouraged me–to continue getting treatments that made me horribly ill and almost killed me. Now this is taking place with everyone on a global level. Kind of a judgment on the willful–and inexcusable–stupidity of humanity. Maybe the world deserves to burn and people deserve to die… Read more »

Hospital admins are masters of chaos, they are engineering a collapse deliberately.

Its not humans driving this, its the devil and his millions of spirit beings! They have been let loose on a sinning mankind who refuse to part of their evil ways! The diablo is a superior being thats hellbent on destroying our souls! Stay in the light and get the good Lords spirit and wisdom!

The humans are doing it. They know it’s killing people and don’t care. Because money. The only thing they can plead ignorance to is not knowing they’re slated for destruction too. I agree about the devil and his angels, but he tempts. Taking the bait is a choice.

My Wife and 2 Daughters all received their second Pfizer Experimental Gene Therapy inoculation today Friday 5th of November. My Wife has many underlying health conditions and my 2 Daughters both under age 25 that been reading alot that Micarditus and Pericarditis that is not as Rare as been advised. Now my entire family and mother in law and a few of my friends are all part of the Long Term SAFETY Data when becomes known. So scared that I will be attending too many Funerals before even the World Clinical trials is completed.

Why would you guys all get the jab?

I asked the same question it was their freedom of choice even though I gave the facts to show that going to be on the Long Term SAFETY Data. Just they believe in the Government Science more than my beliefs. I know I am right however not looking forward to the outcome.

[…] ER Editor: We also recommend this piece by Michael Snyder for Zerohedge, titled Something Really Strange Is Happening At Hospitals All Over America. See also this via Technocracy News: ER’s Are Suddenly Filled With Seriously Ill, But Not With COVID. […]

“The MSM says nothing”. This is old news…. The MSM ARE doing their job: they are paid by a worldly presence – a little higher up than Soros -to collude with evil. We observe how investigative journalists get fired… or imprisoned…or are persecuted by the British CIA (who are directing the O’Biden armed forces with one hand and the CCP with the other) Honest investigative journalists must work for themselves, for Holy God, for Truth – and be ready and willing to suffer the consequences of their worthy counterintelligence mission. And Patrick, most of us do realize that the ERs… Read more »

All those symptoms are exactly what is expected from the vaccines. We were warned months ago that this would start before Christmas. Of course the medical technocrats are silent, maybe running away or hiding. I bet if they check, near 100% of the sick people will be vaccinated, probably twice or more. This is just the beginning. Millions more vaccinated people will be getting very sick.

Only God can save us now | Catholicism Pure & Simple

[…] whatever protections they provide against COVID diminishes in a few months. What exists is evidence of harm being done, from the scare tactics, the draconian responses to COVID, as well as from the injecti0ns […]

Restored Republic via a GCR as of November 22, 2021 | Operation Disclosure Official

[…] Are Suddenly Filled With Seriously Ill, But Not With COVID: https://www.technocracy.news/ers-are-suddenly-filled-with-seriously-ill-but-not-with-covid/ Signs of medical apocalypse are surfacing in hospital ERs across the country. The system is being […]