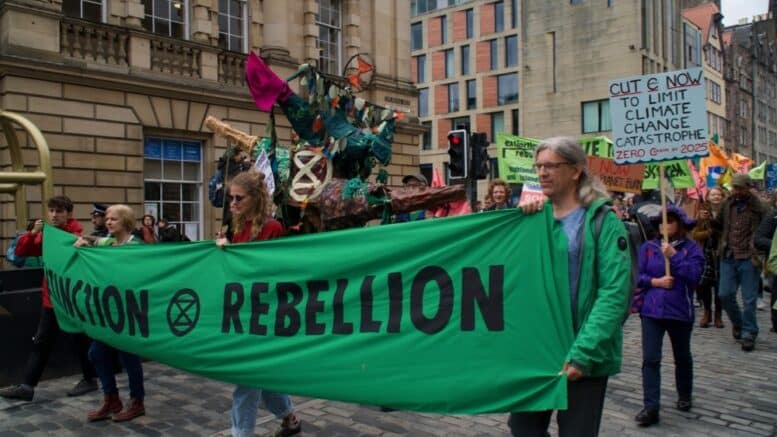 Please Share This Story!
PDF 📄
This insightful article explains how deconstruction groups like Extinction Rebellion (XR) are used to enable Technocracy. The Summary: “XR is used to advance ideas that are the basis of a potential global reset to protect the environment, inaugurating technocracy. At which point, XR becomes disposable.” ⁃ TN Editor

No issue in the West has been more pressing for the general public in the last 40 years than an apparent worldwide environmental crisis caused by mankind. Measurements of global warming, melting polar ice coverage, rising sea levels, atmospheric levels of carbon dioxide, deforestation, extinction of wild species and depletion of fish stocks have been taken as proof that imminent and irrecoverable environmental catastrophe poses an existential threat to mankind. Extinction Rebellion (commonly abbreviated to XR) is an eco-activist movement dedicated to direct action in order to force radical social, political and economic changes to avert environmental collapse.

XR was co-founded in April or May 2018 by Roger Hallam, Gail Bradbrook and others, to act as a spearhead for eco-activist groups Rising Up! (of which Hallam and Bradbrook were members) and Compassionate Revolution Ltd (of which Hallam is a director). The draft manifesto made public by Rising Up! presents anti-capitalist, anti-debt, anti-growth and pro-welfare-state policies. It calls for corporations to be abolished “to be replaced by worker-owned co-operatives that don’t seek profit or growth”. Both Rising Up! and XR claim there will be a catastrophic collapse in civilisation that will result in survivors reverting to tribal nomadism. The predicted eco-collapse seems to be something campaigners welcome, even though they publicly work to avert it. Rising Up! is clear in its hostility to the police. “A Rebellion does not ask permission from the police; it understands that the police are a fascist organisation who are enforcing a racist, patriarchal neoliberal system.”

XR is different. In the XR handbook (published by Penguin Random House) you will find — sprinkled among personal stories and grave statistics — easy-to-follow guides on to how to undertake activism and protest. XR advocates non-violent mass protest, along the principles established by Gene Sharp. It says change is possible through peaceful disruption and that it is the sight of normal protestors being arrested that will precipitate a wave of public sympathy. Hallam suggests that involvement of “1-3 per cent of the population” is sufficient to topple a government (an estimate drawn from Erica Chenoweth and Maria J. Stephan’s Why Civil Resistance Works: The Strategic Logic of Nonviolent Conflict by Columbia University Press, 2012). Although the aims and beliefs of the three groups are interchangeable, XR presents itself as less threatening than the older groups. It is as consciously shaped as a brand. “Unlike many of the spontaneous social-media-fuelled rebellions and uprisings in recent years, Extinction Rebellion has been carefully planned. For several years a group of academics and activists have been working on two main questions: Why have we failed so miserably to stop climate change? And how the hell are we going to stop it? […] We studied decades of work looking at organizational systems, collaborative working styles, momentum-driven organizing and direct-action campaigning.”

XR ties itself to issues of social justice. It uses slogans (“System Change Not Climate Change”) that are taken from the Socialist Worker and Socialist Workers Party. The aim is to rule through Citizens’ Assemblies (overseen by experts) with an environmental priority. XR tends to shy away from making explicitly anti-capitalist statements in published material. For example, in the XR handbook (a masterfully crafted piece of propaganda), there are calls for reduction of environmental exploitation by companies but not a single proposition on behalf of anti-capitalism — a core tenet of Rising Up! and Compassionate Revolution. When anti-capitalist sentiments come out in spontaneous social-media posts of XR leaders, they are usually subsequently deleted. XR keeps silent its eco-socialist views because it needs to appeal to the masses. “It has to be fun,” urges XR’s co-founder.

Artivism is a component of XR campaigning. It has created spectacles that catch the eye and are reproduced in the mainstream media (see Ronan McNern’s “One by One: A Media Strategy”). On 11 August 2019, a group of red-clad figures with white faces appeared at a beach at St Ives, Cornwall to warn of rising sea levels. It was timed to cause maximum impact among the many tourists. A professional-quality video of the event was produced. Similar costumes appeared in October 2020 for a silent theatrical performance outside the Australian Parliament as it debated an environmental bill. Another performance was at the June 2021 G7 summit in Cornwall. A different approach is provision of interactive festivities such as a “late-night playground”, allowing visitors to listen and dance to music, watch acrobatic performances, watch films and engage in various activities with an XR theme.

Making XR a mass movement led to the founding of multiple branches worldwide and encouraging the participation of teenagers in artivism. “We’ll hand-paint banners and make sure they’re as sharp as possible, thinking about how this might look in photographs, […] the odd drip looks really good” (Miles Glyn and Clare Farrell in “Arts Factory”). Artivism as group bonding, self-expression, moral intervention, political protest and art project makes XR action exciting for teenagers. Alejandro Vasquez (aged 18), one member of XR Youth in New York City, explained the appeal of direct action.

I’m one of the action coordinators, so I’ve been thinking non-stop about how we can make stuff more creative and more polarizing, so it engages creativity but you also have to put in escalated actions. I feel that’s one key component that I love about XR. It challenges me. For example, I’m walking around the City and I’m like, “Oh right there could be an action”. And I’m there for the next half hour taking pictures. I’m always scoping out places now just in my regular day to day life.

Vasquez was motivated by the dire warnings of XR. “I was at an event for XR adults and you’re sitting and Roger Hallam […] was talking and he went really deep into Extinction Rebellion and saying we’re going to be extinct if we don’t do anything; large cities will face starvation if we continue doing these things and we don’t have enough infrastructure for agriculture in local places, like NYC, which is a food desert, to continue when other places are going to suffer and go through mass migrations, and I remember I had to step back a little bit and like breathe, and then go back in cos it was all serious for three hours…”

The composition of XR demonstrators is demographically indistinguishable from the managerial elite, a class that political theorist James Burnham believed would come to dominate society. Using technocratic management techniques to neutralise political parties and movements, the educated middle-class would co-opt private and public sectors in an interlocking apparatus of power. A university study of British XR protestors reveal they are overwhelmingly middle class, highly educated and southern, with an unusually broad range of ages, with more women than men. Of the adults, 85 per cent are educated to degree level. XR supporters are “more likely to be new to protesting than other environmental activists”. In the April 2019 protests, 10 per cent of demonstrators were first-time activists, “twice the proportion of ‘novices’ at climate marches a decade before”.

Like many revolutionary groups, XR receives the support of the elite class. In addition to crowdfunding, XR has received large donations from Kennedys, Gettys, billionaires and charities. It publicly thanked a toiletries manufacturer for a donation. In 2018, a foundation with a history of backing “radical and far left initiatives [that] was created by the German-Greek philanthropist Antonis Schwarz” made a substantial donation to Rising Up! (“20,000 to 40,000” pounds or euros). This money was apparently used as start-up capital for XR. £121,140 was donated to XR by Children’s Investment Fund Foundation (“the world’s largest philanthropy that focuses specifically on improving children’s lives”) on 8 April 2019.

Rising Up! and XR propose environmental sustainability through restricting capitalism and replacing parliamentary democracy with rulership guided by scientists. Taming free-market capitalism, curbing the unpredictability of democracy (however limited), governance by experts and reducing personal freedom in a system of surveillance, nudge and control — all in the name of environmental sustainability — are goals of super-wealthy globalists, international firms, NGOs and civil servants: the managerial elite. From the point of view of the big financial backers of XR, its radical proposals act as assault against obstacles the managerial elite faces in its drive towards meshing state and mega-corporations in a top-down managed economy.

Academic Eva Etzioni-Halevy explains how elites absorb protest movements. “The aim and/or result of the mechanism is not to eliminate the movement and its activities, or even to alter it completely, but rather to let it persist while dissipating its threat; the aim is to eliminate not the movement itself, but its destabilizing potential. […] This cannot be done in a straightforward manner.”

No conspiracy is needed; it is a natural alignment of interests. For its own ends, the elite opportunistically appropriates the opportunity that XR presents. XR and its supporters are genuinely worried about the environment, big donors feel they are doing their bit for a good cause, policemen do not want to behave toughly towards middle-aged women chained to the doors of banks and so on. Everyone acts in good faith and with the best of intentions, and the slide towards authoritarianism is accelerated.

XR is an ideal example of a supposedly subversive movement that aligns with the values of the managerial elite’s institutions, agencies, charities, think-tanks and governments, all of which seek to limit the population’s consumption of resources (see the Paris Treaty, COP26 and G7 briefings). XR is used to advance ideas that are the basis of a potential global reset to protect the environment, inaugurating technocracy. At which point, XR becomes disposable.

Geez, these people are so twisted.

This is great! I am doing exactly what they say… except by resisting **THEIR** fasco-Marxism, of which they are too utterly STUPID to undestand tha fascism, as defined by Mussolini in his eponymous 1932 book is the merger of the SOCIALIST state with coopted crony big biz. Download Mussolini book here https://sjsu.edu/faculty/wooda/2B-HUM/Readings/The-Doctrine-of-Fascism.pdf If these leftists weren’t so utterly STUPID, they would look in the mirror, along with Antifa (soon to be renamed Protifa, and you will be expected to forget the old name down the Orewellian memory hole) and their buddies at BLM (Buying Large Mansions) Hard to understand how… Read more »

Orwell. not Orewell. I type as well as ignorant lefttist think

“Dutch Farmers Told To Kill Off 30% Of Their Livestock To Save Planet”https://principia-scientific.com/dutch-farmers-told-to-kill-off-30-of-their-livestock-to-save-planet/
Another attack on the food supply.