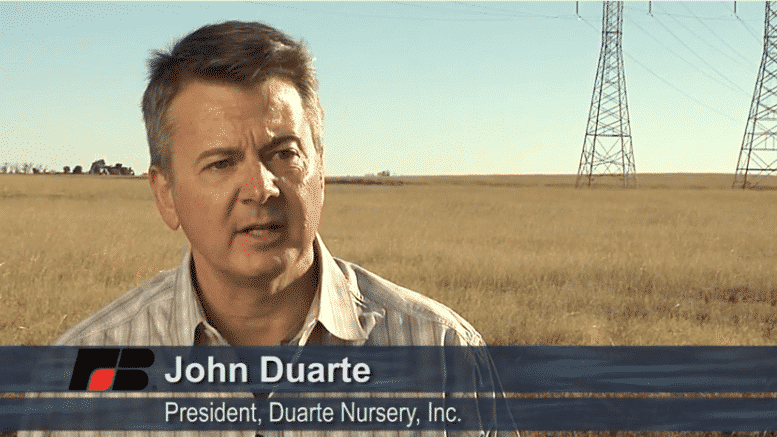 I have warned for years that the Federal government would assert its full authority under the Clean Water Act that cedes all water in the U.S. to the them: from rivers, marshes, swamps, mud flats, drainage, playas, underground rivers, etc. The Feds are making a test case out of this farmer, and if they win, food production in America will drop precipitously. ⁃ TN Editor

A farmer faces trial in federal court this summer and a $2.8 million fine for failing to get a permit to plow his field and plant wheat in Tehama County.

A lawyer for Duarte Nursery said the case is important because it could set a precedent requiring other farmers to obtain costly, time-consuming permits just to plow their fields.

“The case is the first time that we’re aware of that says you need to get a (U.S. Army Corps of Engineers) permit to plow to grow crops,” said Anthony Francois, an attorney for the Pacific Legal Foundation.

“We’re not going to produce much food under those kinds of regulations,” he said.

However, U.S. District Judge Kimberly J. Mueller agreed with the Army Corps in a judgment issued in June 2016. A penalty trial, in which the U.S. Attorney’s Office asks for $2.8 million in civil penalties, is set for August.

The case began in 2012 when John Duarte, who owns Duarte Nursery near Modesto, bought 450 acres south of Red Bluff at Paskenta Road and Dusty Way west of Interstate 5.

According to Francois and court documents, Duarte planned to grow wheat there.

Because the property has numerous swales and wetlands, Duarte hired a consulting firm to map out areas on the property that were not to be plowed because they were part of the drainage for Coyote and Oat creeks and were considered “waters of the United States.”

Francois conceded that some of the wetlands were plowed, but they were not significantly damaged. He said the ground was plowed to a depth of 4 inches to 7 inches.

The Army did not claim Duarte violated the Endangered Species Act by destroying fairy shrimp or their habitat, Francois said.

The wheat was planted but not harvested because in February 2013 the Army Corps of Engineers and the California Central Valley Regional Water Quality Control Board issued orders to stop work at the site because Duarte had violated the Clean Water Act by not obtaining a permit to discharge dredged or fill material into seasonal wetlands considered waters of the United States.

Duarte sued the Army Corps and the state, alleging they violated his constitutional right of due process under the law by issuing the cease and desist orders without a hearing. The U.S. Attorney’s Office counter-sued Duarte Nursery to enforce the Clean Water Act violation.

However, according court documents filed by the U.S. Attorney’s Office in Sacramento, the tractor was not plowing the field. Rather, it was equipped with a ripper, with seven 36-inch ripper shanks that dug an average of 10 inches deep into the soil.

The ripping deposited dirt into wetlands and streams on the property, in violation of the Clean Water Act, according to documents filed by the U.S. Attorney.

Assistant U.S. Attorney Gregory Broderick said he could not comment on the case and referred questions to his office’s public affairs department, which did not call back Monday.

Henry Kissinger once publicly pointed out that the only effective way to control the general public is to control the food supply. The SOB’s have been quietly putting the legal framework in place to do just that for over fifty years. Most people have forgotten that the most onerous parts of the FDA Food Safety Modernization Act, the most recent addition to that legal structure, did become law, by sneaking them through as a rider on a “must pass” budget bill. It is technically a Federal felony to give or trade produce from your garden to your neighbors. Widespread enforcement… Read more »

Here is some light reading to assist you comprehending your own sense of morality, ethics. Can only show you the door. The choice to go through, or not is up to each of us individually. “I came into this world, not chiefly to make this a good place to live in, but to live in it, be it good or bad.” — Henry David Thoreau “If the machine of government is of such a nature that it requires you to be the agent of injustice to another, then, I say, break the law.” — Henry David Thoreau “That whenever any… Read more »