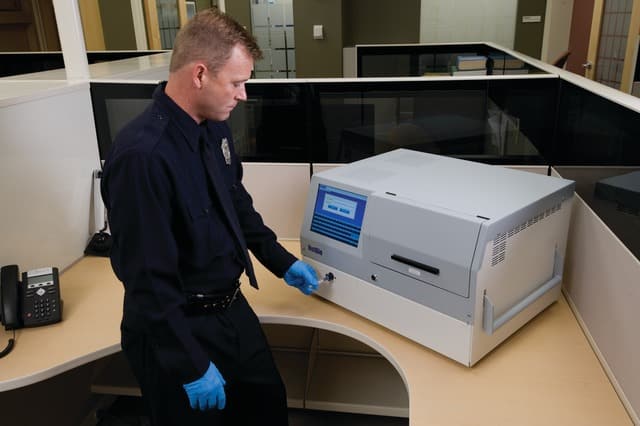 The barriers to ubiquitous DNA scanning and identification are being rapidly broken down as law enforcement adopts new devices being sold without regulations attached. Who will have access to the results and what will they do with them? ⁃ TN Editor

Though DNA has revolutionized modern crime fighting, the clues it may hold aren’t revealed quickly. Samples of saliva, or skin, or semen are sent to a crime lab by car (or mail), and then chemists get to work. Detectives are accustomed to waiting days or weeks, or more, for the results. Some labs are so backed up, they only take the most serious crimes. Some samples never get tested.

But a portable machine about the size of a large desktop printer is changing that. A “Rapid DNA” machine can take a swab of DNA, analyze it and produce a profile of 20 specific loci on the DNA strand in less than two hours. Some local police departments and prosecutors have been using Rapid DNA machines for about five years to solve crimes.

In Orange County, California, recently, police investigating a stabbing found a trail of blood from the suspect. The Rapid DNA machine was able to produce a profile that matched someone already in the Orange County database, but who was “not on the radar” of investigators, Assistant District Attorney Jennifer

Contini said. He was arrested. “The speed with which you can give law enforcement these clues is critical,” Contini said. “When you are out on these suspects fast, they confess. We’ve had tremendous success.”

And last month, one of the two manufacturers of Rapid DNA machines, ANDE of Waltham, Massachusetts, shipped six of the machines to California for use in trying to identify victims of the massive wildfires there, using DNA from family members to create a temporary searchable database.

However, the machines currently aren’t connected to CODIS, the FBI’s combined national DNA database. So the FBI is launching a Rapid DNA initiative to place the machines in police and sheriffs’ booking stations around the country, hoping to enable law enforcement to check arrestees against the CODIS database and, when a match is made to DNA from an unsolved crime, capture the person before they’re released.

In testifying to Congress about the Rapid DNA network in 2015, then-FBI Director James Comey said the technology “would help us change the world in a very, very exciting way.” Comey said it would allow “booking stations around the country, if someone’s arrested, to know instantly — or near instantly — whether that person is the rapist who’s been on the loose in a particular community before they’re released on bail and get away or to clear somebody, to show that they’re not the person.”

Thirty states and the federal government currently allow DNA to be taken at the time of arrest. Sixteen states allow it to be analyzed immediately, and in the other 14 states, DNA may be taken at arrest but not analyzed until after arraignment on charges. The FBI expects that a Rapid DNA network will not only enable more identifications of crime suspects, but also drastically reduce the time investigators spend waiting for DNA results, and lessen the burden on crime labs.

Congress approved legislation authorizing the Rapid DNA network last year, and the FBI plans to slowly roll it out beginning next year. “Our goal in 2019,” said Thomas Callaghan, chief biometric scientist for the FBI Laboratory, “is to be able to have a pilot project done where we actually develop a DNA profile in a booking station, with no human review, and have it electronically enrolled and searched in the national database. We have to ensure that the quality that’s done in a lab can be done in a booking station,” which are often jails where fingerprints and mugshots are usually taken.

The FBI program will not allow the submission of unknown crime scene from the Rapid DNA machines to the CODIS database. “The machines were initially developed,” Callaghan said, “for large amounts of DNA from a single person, soon after it’s collected.” Crime scene DNA could have a mixture of DNA from different sources, or be contaminated by its surroundings, and the machines have not proved “robust enough to handle crime scene samples,” Callaghan said, so the Rapid DNA submissions to CODIS may only come from known individuals.