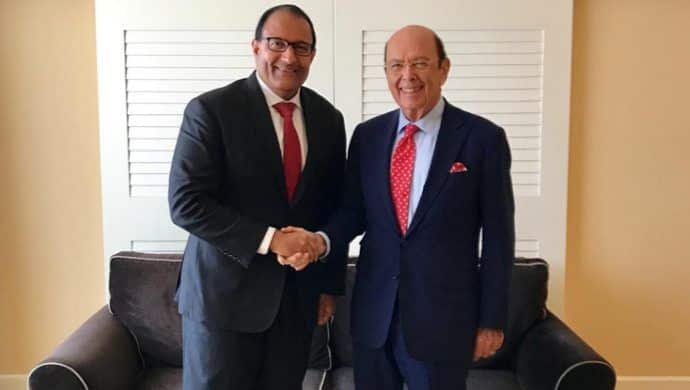 Photo courtesy of the Ministry of Trade and Industry.

Please Share This Story!
PDF 📄
The undercurrent of this article connects trade to Fintech and Smart Cities, both of which are tightly related to Sustainable Development, which is Technocracy. This further indicates the the Trump Administration has no awareness of Technocracy or the nefarious plans of the United Nations to overthrow Capitalism and Free Enterprise. ⁃ TN Editor

In a bilateral meeting between S. Iswaran, Singapore’s Minister for Trade and Industry, and the US Secretary of Commerce Wilbur Ross, the two countries reaffirmed strong bilateral trade ties.

These industries were highlighted because the two politicians discussed how an MOU called the ‘US-Singapore Collaboration Platform Memorandum of Understanding’ can be used to facilitate trade between the nations. The meeting occured on the sidelines of the Milken Institute Global Conference in Los Angeles, California.

The MOU was signed by Prime Minister Lee Hsien Loong during his official visit to the US in 2016. During the trip, former US President Barack Obama specifically mentioned Singapore’s startup hub Block 71 (a moment that caused much excitement in the community here).

According to the Ministry of Trade and Industry (MTI), Singapore and US bilateral Goods and Services trade totalled US$68 billion in 2016.

“Singapore and the US share strong and mutually beneficial economic relations, and the US-Singapore Free Trade Agreement (USSFTA) is the cornerstone of our relationship,” said Iswaran in a statement.

“We look forward to deepening our relations with the US and building on our early successes under the US-Singapore Collaboration Platform MOU.”

During the event, Iswaran spoke at a roundtable discussion about ASEAN. During the talk, he discussed the importance of globalisation and open markets in the modern economy.

In one of his first moves in office, Ross’ boss, US President Donald Trump, nixed the Trans-Pacific Partnership (a global free trade deal heavily involving Asia). He was elected on an ‘America First’ platform that largely rejected globalisation.

Iswaran also met with Singaporean and American business people during the trip.