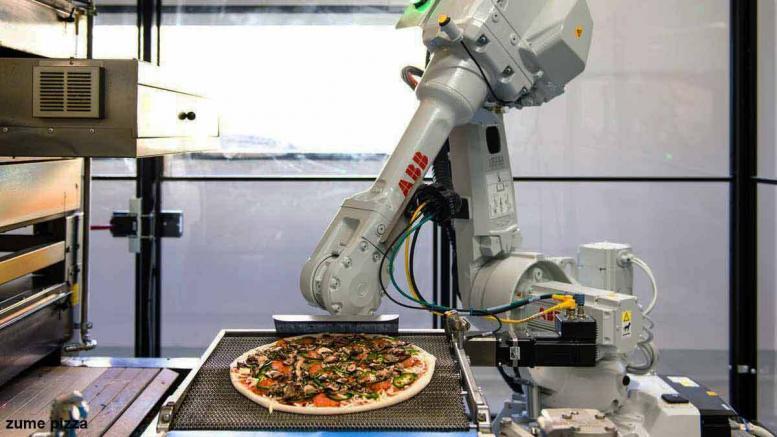 Please Share This Story!
PDF 📄
Zume Pizza made headlines in 2016 when it became the first fully-automated-by-robots pizza delivery service; today, trucks are gone, robots are powered off and human employees are laid off. Other competitors continue to operate. ⁃ TN Editor

Zume Pizza, the Mountain View company that used robots to make its pizzas, has made its last delivery.

In filings with the state Employment Development Department, Zume said it is cutting 172 jobs in Mountain View, and eliminating another 80 jobs at its facility in San Francisco. Zume Chief Executive Alex Garden made the annoucement about Zume in an email to company employees on Wednesday.

“With admiration and sadness, we are closing Zume Pizza today,” Garden said in his email “Over the last four years this business has been our invention test bed and has been our inspiration for many of the growth businesses we have at Zume today.”

Zume was known for using for robotic technology to put its pizzas together, as well as its red delivery trucks that operated around Mountain View and parts of San Francisco. Adam Ezzat, an employee at Boss Barbell Club, which shared a parking area with Zume on Polaris Ave. in Mountain View, said it looked like things weren’t right at Zume when he was at work Wednesday night.

“At around 8 or 9, I saw their trucks leaving, which was earlier than they typically did,” Ezzat said. “I came in today around noon, and all of their trucks were gone.”

The Bay Area job cuts are part of a larger restructuring at Zume, as the company is reducing its headcount by a total of 360 employees. Zume said it intends to put its focus on its food packaging and delivery systems.